Republicans and Democrats are each blaming the other party for the impasse that has caused government funding to expire and a partial government shutdown to loom on Monday.

During a conference call with reporters Saturday, U.S. Rep. Rodney Davis (R-Taylorville) said 6 years of government funding for a children's health insurance program (CHIP) should have been enough to encourage bipartisan support, though it did not get that in either chamber.

"We gave them a good bill, a bill that did not have extraneous issues on it, funded priorities that are American priorities and not just Republican priorities, and they voted instead to shut the government down. That is wrong," said Davis.

Davis said he does not think the shutdown was necessary and that he believes  the timing of the deadlock close to the one year anniversary of President Trump taking office is not a coincidence. He also called out Democratic Senator Dick Durbin of Illinois for hypocrisy.

"In 2013, he actually said it takes cowardice to allow a shutdown. Now, he is leading the filibuster that is actually stopping the Senate from passing this government funding mechanism," said Davis.

5 Republican Senators voted against the funding measure. And 5 Democrats voted for it, still leaving the total 9 votes short of passage.

Some Democrats held out because the Defered Action for Childhood Arrivals, or DACA, immigration program was not addressed. Some Republicans did not like the lack of funding continuity for the military.

WGLT asked Congressman Davis what he thought could be added to the bill to achieve passage and attract 9 more votes and whether any additions would pass the House.

"The answer is pass our bill. If they pass our bill, they don't need to send it back to the house," said Davis.

I’m on the Senate floor now explaining why we are here, in a government shutdown: because President Trump and the Republicans continue to ignore their responsibility to govern.

It has been more than four months since the Trump Administration terminated DACA and called for Congress to come up with a legislative solution.  Senator Durbin's statement before the vote, noted that beginning on March 5, 2018, 1,000 young people will lose DACA protection each day, and the Trump Administration itself has acknowledged that it will take six months to implement legislation.

“So what has the Republican majority in the House and Senate done in the four and a half months since we received that challenge from President Trump?  Nothing.  Nothing.  And then I hear Senator McConnell say we haven’t even seen a written proposal from the Democrats on this.  The Senator knows better.  A group of us, six of us, three Democrats and three Republicans accepted President Trump’s challenge and produced a bipartisan solution.  We have described it to everyone, Democrat, Republican alike.  It was a good-faith effort.  Real compromise.  Pain on both sides.  It’s ready.  It’s ready to be brought to the floor of the United States Senate.  It’s ready to be passed into law.  For Senator McConnell to say he doesn’t know anything about it, I’m sorry, but we have been very open about what’s included in there.  He knows it’s a product of long and hard bipartisan work,” said Durbin.

Democratic Senator Tammy Duckworth issued a statement following the vote that lead with a point echoed by many Republican House defense hawks who did not like the lack of long term for the military. Duckworth then went on to other issues particular to her party.

“In addition to seriously harming our Armed Forces, this bill fails to adequately support Veterans or fund community health centers, and it leaves hundreds of thousands of Dreamers in a state of uncertainty. Enough is enough. I didn’t spend 23 years in the military going through multiple deployments just to weaken our national security, hurt our troops and kick the can down the road again. If they wanted to, Paul Ryan, Mitch McConnell and Donald Trump could address these concerns with bipartisan votes on Republican-written legislation that solve each of these problems, and they know it. That they haven’t-even though they control all levers of government-jeopardizes not just our military, but the well-being of the very people we took an oath to serve, ” said Duckworth.

The immigration issue further tangles the web of possible bills. Some Republicans have said they won't support a funding measure that includes DACA without funding for President Trump's proposed wall on the border with Mexico. Some Democrats have said they won't support money for the wall without comprehensive immigration reform. The word 'comprehensive' suggests to many Republicans amnesty for long term undocumented immigrants apart from dreamers and is a non starter with them.

U.S. Rep. Darin LaHood, R-Dunlap, and several other GOP House members from Illinois also issued a statement accusing Durbin and Duckworth of placing party leadership over the state of Illinois in that the shutdown endangers funding for the Centers for Disease Control and Prevention and military funding.

“We are asking Senators Durbin and Duckworth to vote on the substance of the bill; we are asking them to vote to reopen the government immediately. Holding the U.S. government hostage over unrelated issues that we have all committed to addressing is no way to govern.”

In spite of the wrangling, Representative Davis said he is optimistic the Senate can get a bill and that negotiations are continuing. Davis said, though, so far, the phones are not ringing much and the volume of calls to his office is predominantly on other issues. 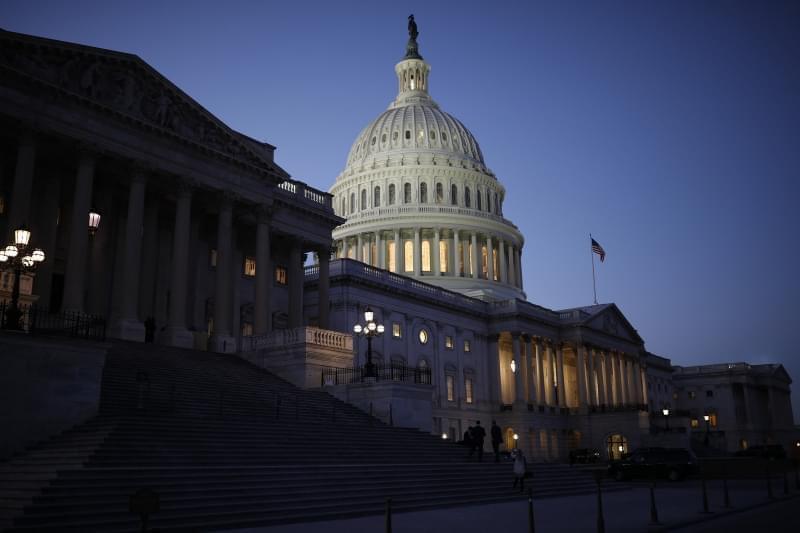