Illinois Republican Congressman Rodney Davis gave blood Wednesday at Community Blood Services in Urbana. While there, he talked with reporters about the arrest last week of a former campaign employee, and claims made about President Trump by his former personal attorney.

Davis said Levi Lovell, the former campaign field worker who was arrested at a fundraiser for his opponent last week, went there on his own.

The Republican lawmaker says neither he nor anyone in his campaign sent the 25-year-old Lovell to the August 15 event for Democrat Betsy Dirksen Londrigan in Springfield. Police say Lovell shoved people, tried to record them with a cell phone, and appeared to be intoxicated.

Davis said Lovell’s conduct goes totally against his own calls for more civility in politics, made in the wake of the 2017 Congressional Baseball shooting.

“Politics should not be what we saw in that video,” said Davis. “It’s not what I stand for. And it’s certainly something that I am very apologetic about. And I want to see us be able to move into a civil debate to talk about the issues.”

Davis said his campaign fired Lovell as soon as they learned of his arrest for aggravated battery. The congressman said he apologized to Londrigan for the incident. Davis said he knew nothing about a previous incident in Champaign that Lovell told police was “similar.”

Davis said it’s up to President Donald Trump to explain to the American people what happened, now that his former personal lawyer Michael Cohen has implicated him in payments to buy the silence of women who said they had affairs with him.

Davis said it’s too soon to say whether Cohen’s statements will affect his own support for the president.

“Number one, we’ve got to see the facts of the case,” said Davis. “Number two, I don’t know what precedent there is to charge a sitting president with a campaign finance violation. That’s something that I’ll leave up to the lawyers to talk about on TV incessantly.”

Davis said Tuesday was a bad day for the president, between the guilty plea and statements by Cohen, and the conviction on eight counts of fraud for Trump’s former campaign manager, Paul Manafort.

President Trump has defended Manafort, but said in a tweet that Cohen was making up stories about him to get a “deal” from prosecutors.

Still, the Republican congressman said he supports many of the president’s policies, and that Trump won Davis’ congressional district in 2016.

Davis said he’s mindful of the importance of donating blood year round, so that hospitals have the blood supplies they need.

“Not just during a tragedy like I witnessed, when a crazed gunman came and shot at us and tried to kill us last June, but everyday needs for blood in our medical communities,” said Davis.

Margaret Vaughn with the Illinois Coalition of Community Blood Centers said the coming Labor Day Weekend will depress blood donations just as the need for blood goes up.

You can find a local blood center near you by typing in your zip code at the website americasblood.org. 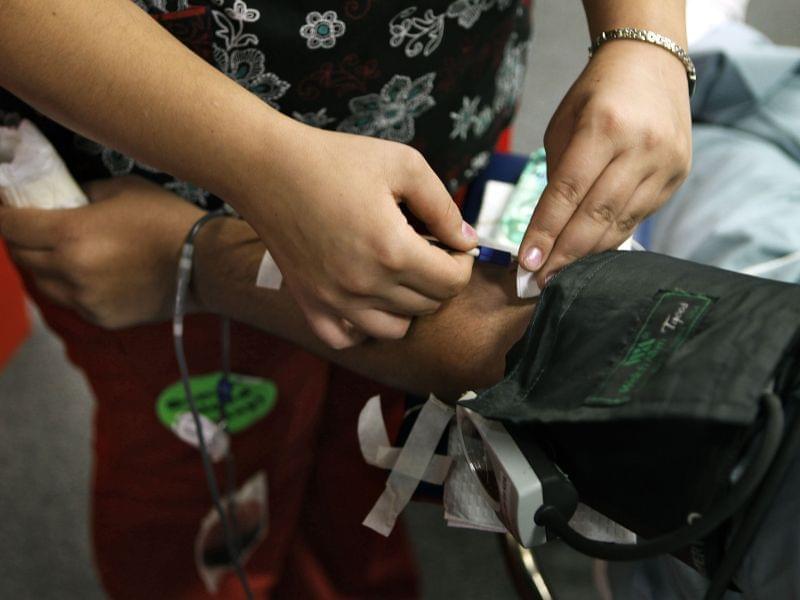