Every year around the start of April, book lovers gather with some of their favorite titles ... and eat them.  It's called the annual Edible Book Festival. This year's local event was held April 1st on the University of Illinois Urbana campus. The creations compete for awards in categories that include, the Funniest-Punniest.

Diana Gonzales won that prize for creating "Tequila Mockingbird." She walked to the front of the room to receive her prize of a rubber chicken. Her entry was a small frosted bird made from rice crispys, sitting next to a small bottle of tequila, filled with ice tea.

“I wanted to make a funny looking bird," she said. "I didn’t want to make anything serious and I wanted to make everyone laugh and it seems that’s exactly what happened, everybody liked my creation because I had fun and that’s what it’s all about, coming together as a community enjoying books and having fun."

International Edible book festivals began in 2000 when two women came up with the idea during Thanksgiving dinner. This global event takes place around the world.  The only requirement to be in the festival is you have to be okay with them taking pictures of your edible creation then watch it being eaten.

This year, there were entries ranging from "Alice in Wonderland," and "Mr. Poppers Penguins," to some that utilized puns, like "Bride and Prejudice." 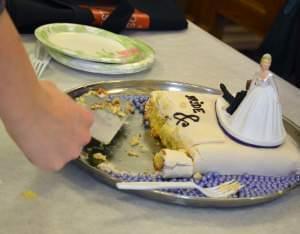 These entries are not just cakes that look like books, though there are plenty of those. Entries can be any type of edible material that can be transformed into something that symbolizes the spirit of a book. For example, a slow cooker full of soup called “The Taming of the Stew.”

Dwight Divine visited the festival. He said he loved the variety of entries. "Some of them are very, very creative and in different ways too. Some are structurally creative and some are brilliantly puny, I think it was a nice diversity.”

Judges award entries based solely on appearance, not taste.  Some of the categories were Fan Favorite, Best adaptation of a Classic and the crowd favorite: Funniest and Punniest.

Valerie Hotchkiss is the head of the University of Illinois’s rare books and manuscripts library and one of the competitors.  She says she participates in the festival every year.

“Why do we do it? We love books and we love to eat. And we are all punsters over at the rare books and manuscripts library so it always is a pun,” she said.

Hotchkiss’s book was "‘Tis a Pity She’s a S’more," which was made from giant s’mores in the shape of a bikini body.

Daniel Tracy is the Coordinator for the edible book festival and he says the point of the festival goes beyond food.

“It’s really just a celebration of literacy and reading in the community and books and enjoyment of books and all of the talent people have around those things.”

Diana Gonzales, who won two awards this year for her "Tequila Mockingbird" entry, says she hopes the event inspires people.

“I hope that everybody will get a little bit of the spirit of going home and reading something they have never read before or maybe cooking up something that they have never made before and just kind of having fun," she said. "It’s a nice family even as well so hopefully children will see it and get inspired as well.”