A former University of Illinois doctoral student was spared the death penalty Thursday and sentenced to life in prison for kidnapping and killing of a 26-year-old scholar from China. Her parents, disappointed he was not sentenced to death, publicly begged for the killer to reveal where her remains are so they can be returned home.

Jurors deliberated for eight hours over two days before announcing they were deadlocked on whether 30-year-old Brendt Christensen should be put to death for killing Yingying Zhang, automatically resulting in a sentence of life behind bars without the possibility of parole.

The same jurors took less than 90 minutes to convict Christensen last month for abducting Zhang from a bus stop, the raping, choking and stabbing her before beating her to death with a bat and decapitating her. Prosecutors called for the death penalty , which the Zhang family also supported, but a jury decision on that had to be unanimous.

Christensen, who has never revealed what he did with Zhang's remains , lowered his head and looked back smiling at his mother when he heard that his life would be spared.

Zhang's family said in a statement that they did not agree with the jury's decision to sentence him to life in prison rather than death.

Speaking through an interpreter, her father, Ronggao Zhang, appealed to Christensen to reveal where her body is so that the family can take her remains back to China.

"If you have any humanity left in your soul, please end our torment. Please let us bring Yingying home," Ronggao Zhang said.

The U.S. Attorney for Central Illinois, John Milhiser, said that efforts to find Zhang's remains would continue. As he spoke, Zhang's mother, Lifeng Ye, sobbed and the woman standing next to her appeared to be holding her upright.

Among the most poignant testimony during the penalty phase was from Zhang's mother. She told jurors how the family was devastated by the loss of her beloved daughter, who had aspired to become a professor and to help her working class family financially.

"How am I supposed to carry on living?" she said in testimony by video. "I really don't know how to carry on."

She said Christensen dashed Zhang's dreams and those of her family. Yingying was killed months before she had planned to get married.

"My daughter did not get to wear a wedding dress," Lifeng Ye said. "I really wanted to be a grandma."

Zhang's father, Ronggao Zhang, cried when shown a photo of the two of them at a train station as she left for the United States.

"My life without her will not be complete," he told jurors.

Her boyfriend, Xiaolin Hou, testified that the family's only hope was that Zhang's body will be found so they can bury her in China. Prosecutors indicated in court filings that Christensen may have destroyed the remains.

Christensen's parents took the witness stand, too, and appealed to jurors to spare their son's life. Both said they loved him unconditionally.

Michael Christensen said the thought of his son being executed was unbearable, prompting Brendt Christensen to break down crying in a rare display of emotion.

Ellen Williams, his mother, told jurors that Christensen's crime was "horrible" and that she thinks about Zhang's family "at least five times a day and how horrible this must be for them." She said her son was extremely bright, kind and considerate.

The defense sought to humanize Christensen by showing home videos of him playing the piano and opening Christmas gifts as a child.

Brendt Christensen is a native of Stevens Point, Wisconsin. He began his studies in Champaign at the university's prestigious doctoral program in physics in 2013.

Christensen's sister, Andrea Christensen, told jurors that her brother had been her role model and that he was never aggressive to anyone when they were growing up.

"Brendt was a very gentle person," she said,

Those depictions jar with Christensen's actions on June 9, 2017.

Prosecutor Eugene Miller said Christensen posed as an undercover officer and lured Zhang into his car when she was running late to sign an apartment lease. The muscular Christensen likely forced the 5 foot 4 Zhang into a 6-foot-long duffel bag that he bought online days earlier and carried her up to his apartment in Urbana, 140 miles (225 kilometers) southwest of Chicago, Miller said. Once inside, he raped and killed her.

Zhang had been in Illinois for just three months — her only time living outside China.

Prosecutors said Zhang was in the wrong place at the wrong time and that Christensen, who had fantasized about killing, was determined to take someone's life that day. They said he had approached a different woman earlier, posing as an officer, but that she refused to get in the car.

Defense attorney Julie Brain told jurors that Christensen had struggled with mental health issues for years and had tried to get help in dealing with homicidal fantasies in the months before killing Zhang.

"What happened next was a ... battle between Brendt and his demons that little by little, he lost," Brain said. 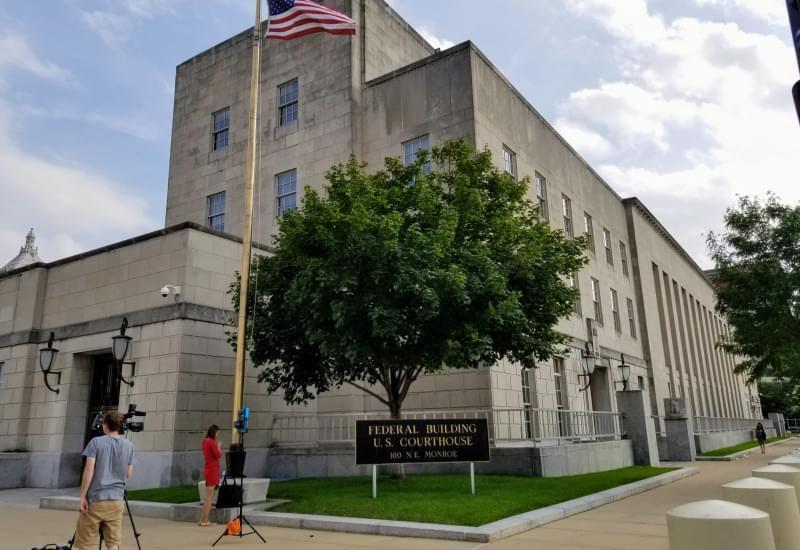