East-central Illinois ceremonies marking the 15th anniversary of the attacks of September 11, 2001 included one held by Champaign firefighters. The ceremony began at 8:46 AM, marking the minute (8:46 AM Eastern Time) when the first plane crashed into the World Trade Center in New York City.

At the Fire and Police memorial at West Side Park, a firehouse bell was rung to remember those who were killed --- including 343 firefighters and 50 police officers who died while responding to the attacks in New York City.

Champaign Mayor Debra Frank Feinen was one of the featured speakers at the ceremony, . She recalled the heightened sense of national unity following the attacks. And Feinen said Americans could renew that sense of unity with individual acts of service.

“Let me plant the seed that today and every day, we will honor those who were lost with a small act of service or a simple of kindness," said Feinen. "Because each of us standing together form a nation united.”

In addition to the ceremony in Champaign, police and fire personnel in Urbana also held a ceremony marking the hour of the attacks with a flag-lowering ceremony outside the city building. The American Legion Post 559 in Champaign hosted its annual 9-11 memorial ceremony later in the day. And the Episcopal Chapel of St. John the Divine in Champaign's Campustown celebrated Solemn Evensong in memory of the victims of the attacks. 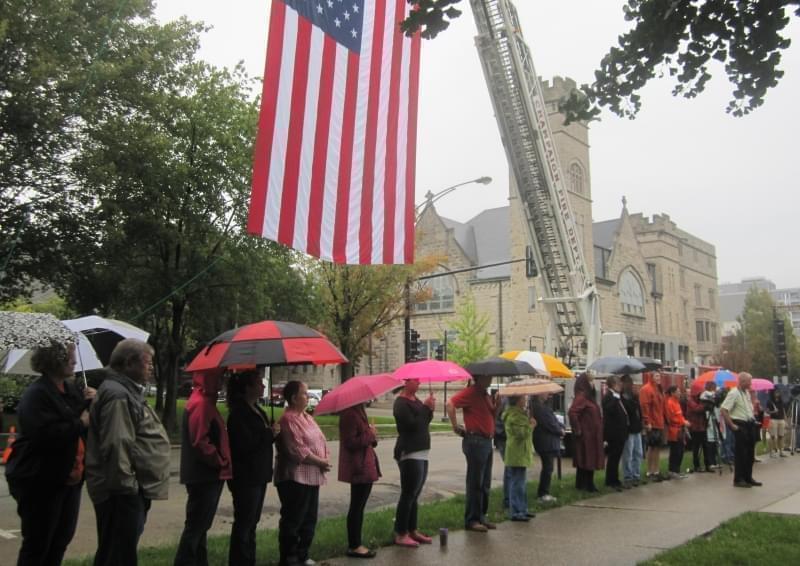