There were only 74,000 jobs added to public and private payrolls in December, but the unemployment rate fell to a 5-year low 6.7 percent, the Bureau of Labor Statistics said Friday morning.

It was a report that included several surprises for economists and raised questions about just how strong — or not — the labor market was as 2013 came to a close. But some of those experts cautioned against reading too much into the data, which may have been skewed by unusually harsh weather last month that might have depressed job growth. They also said the December data could be revised in coming months.

We'll have more on the news. Click your "refresh" button to be sure you're seeing our latest updates.

At the opening of trading Friday, stocks rose slightly. But after the first 45 minutes or so, the Dow Jones Industrial Average is down about a quarter of a percentage point and other indices have dropped similar amounts. You can track the markets here.

"As our economy continues to make progress, there's a lot more work to do," Jason Furman, chairman of the president's Council of Economic Advisers, says in a statement the White House just posted here.

He continues: "Though December's job growth was less than expected, we continue to focus on the longer-term trend in the economy: 2.2 million private sector jobs added and a 1.2 percentage point decline in the unemployment rate over the course of 2013."

"Every American has a right to ask the question 'Where are the jobs?' " House Speaker John Boehner, R-Ohio, says in a statement emailed to reporters. "Today's disappointing report shows, once again, that the president's policies are failing too many Americans, many of whom have simply stopped looking for work."

The White House typically posts its analysis of each months jobs report here. We'll update with a highlight once it's available.

As it releases employment figures each month, BLS also revises the data from earlier months. On Friday, for example, it said that about 38,000 more jobs had been added to payrolls in November than previously thought.

"The surprising low payroll figures [released Friday] had some analysts predicting the number of jobs added in December will be revised upward in the coming month.

" 'I wouldn't pay any attention at all to these numbers. They're not consistent with anything,' Moody's Analytics Chief Economist Mark Zandi said on CNBC. 'We're going to get the benchmark revisions, and they're going to be all revised up and revised away.' "

The Fed, as we wrote earlier, has said it thinks the economy is in good enough shape to allow the central bank to begin scaling back on the amount of money it's been pumping in to boost growth.

What does this jobs report mean for Fed policy?

"If you're the Fed, I don't know what you do with this except scratch your head," tweets Washington Post columnist and Wonkblog economics editor Neil Irwin. 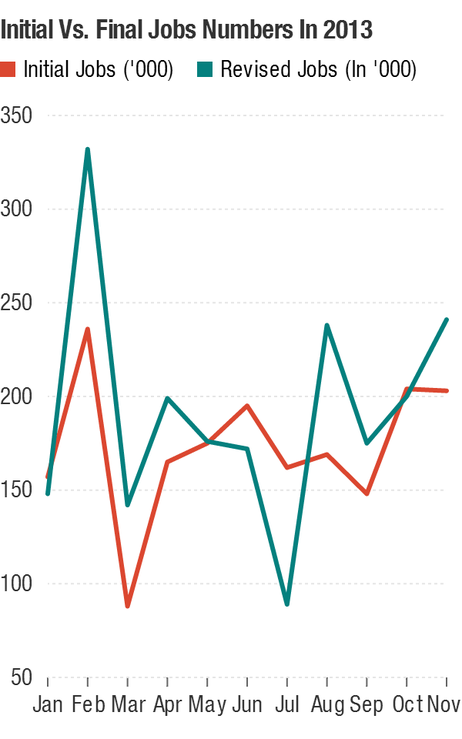 The BLS economists do adjust the data for seasonal factors — to, for example, smooth out some of the variations caused by such things as winter weather that really aren't tied to the economy's underlying health.

But Bloomberg News notes that "more than a quarter million Americans were not at work because of inclement weather, the most for any December since 1977, the Labor Department said." The standard "seasonal adjustments" may not have been able to compensate for that.

The Wall Street Journal writes that "the Lindsey Group's Peter Boockvar suggests that [the sharp, weather-related drop in employment] likely hurt construction employment. ... 'Bottom line, because ... this figure doesn't square with other labor market indicators seen, I'm really not sure what to make of it,' he says."

The 74,000-gain in payroll employment last month was far below the 195,000-or-so that economists expected. But the unemployment rate fell 0.3 percentage points, which also surprised the experts. They had thought the rate held steady at November's 7 percent.

Those figures often seem to contradict each other because they're based on different surveys. The job growth data come from surveys of businesses and government agencies. Those institutions are basically asked to report how many jobs they have on their payrolls. The unemployment figure, meanwhile, comes from a survey of households. People are basically asked if they were or were not working.

To understand what's going on, it's important to dig into the data behind the unemployment rate. According to BLS, there were 347,000 fewer people in the "civilian labor force" last month than there were in November. That group includes both those who have jobs and those who say they're looking for work.

Meanwhile, BLS says that 143,000 more people — a subset of the total labor force — reported they were working. When the total size of the labor force shrinks, but more people say they've got jobs, that brings the unemployment rate down.

A key issue: Why were there fewer people in the labor force? According to BLS, 917,000 individuals were classified as "discouraged workers" last month. That was up by 155,000 from November. Discouraged workers are those who would like to have jobs, but have given up looking for work because they don't think they can find any.

An increase in the number of discouraged workers is not a positive sign.

Our original post — Will Last Jobs Report For 2013 Offer Hopeful Signs For 2014? — previewed the news:

When the Bureau of Labor Statistics releases figures this morning about job growth and the unemployment rate in December, economists will sift through the data to see if the numbers add to the recent evidence of slow improvement in the labor market, NPR's Yuki Noguchi said on Morning Edition.

The BLS report is due at 8:30 a.m. ET. We'll be updating with highlights and reaction to the news. As we wrote Thursday, economists expect to hear that 195,000 or so jobs were added to public and private payrolls last month. The unemployment rate, meanwhile, likely stayed around November's 7 percent.

There's a growing sense among economists, Yuki said, that something of a "warm front" is sweeping across the economy and that job growth in 2014 might be able to continue at a 200,000-or-so monthly rate. If that happens, she added, the jobless rate could be down around 6 percent by year's end.

One caveat: As the Federal Reserve scales back on some of the stimulus it's been giving the economy, that could slow things down.

Our friends over at Planet Money, who track this sort of news all the time, offer this related post: Every Job In America, In 1 Graph.