Egypt's interim PM Hazem Beblawi has defended the deadly operation to break up protest camps in Cairo, saying the authorities had to "restore security".

Mr Beblawi said it was not an easy decision to disperse the supporters of deposed president Mohammed Morsi.

The government, which has declared a nationwide state of emergency, said 235 civilians and 43 police were killed.

But the Muslim Brotherhood, which backed the protests, says more than 2,000 people died in the violence.

Police have now taken control of the camps in the capital and are reported to have arrested key Brotherhood leaders.

In a televised address, Mr Beblawi expressed regret for the loss of life and said the state of national emergency would be lifted as soon as possible.

Mr Beblawi also said police had been given instructions not to use weapons to disperse protesters.

Interior Minister Mohammed Ibrahim said the police had "dealt professionally" with the protesters, and that 43 police personnel had been killed in violence across the country.

He accused the pro-Morsi protesters of building "fortifications" and "firing birdshot" at the police forces.

The protest sites had been infiltrated by armed gangs, he said, and ammunition had been seized from them.

Across the country, members of the Muslim Brotherhood have been arrested and are being interrogated, Mr Ibrahim said.

In the wake of the violence, Vice-President Mohammed ElBaradei has announced his resignation from the interim government. 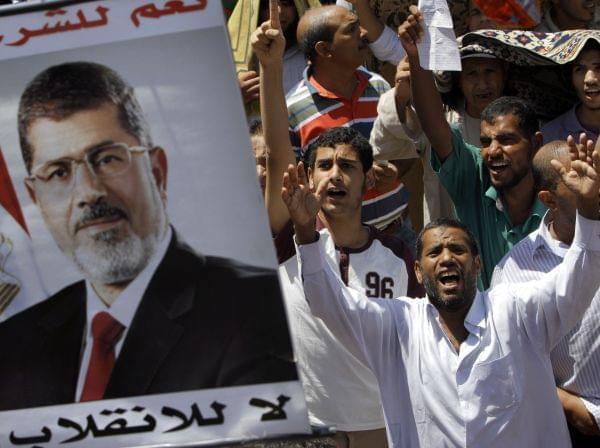 Large plumes of smoke rose over parts of the city as the operation began. Security forces fired tear gas canisters fired and helicopters circled above.

The smaller camp in Nahda Square was cleared relatively quickly, but clashes raged for most of the day around the main camp near Cairo's Rabaa al-Adawiya mosque.

The health ministry has said 235 civilians were killed and 43 police officers.

But the Brotherhood has put the number of dead at more than 2,000.

Egyptian television said that by evening the security forces had seized full control of the site, and were allowing protesters there to leave.

But several Muslim Brotherhood leaders were reportedly detained, including Essam El-Erian and Mohamed El-Beltagi, whose 17-year-old daughter was apparently killed.

A cameraman working for Sky News, Mick Deane, was also killed, as was a reporter for Gulf News, Habiba Ahmed Abd Elaziz. She was not working at the time.

There are also reports of unrest elsewhere in Egypt.

Supporters of Mr Morsi - Egypt's first freely elected president - have been staging street protests since he was ousted on 3 July. They want him to be reinstated.

He is currently in custody at an undisclosed location, and has been accused of the "premeditated murder of some prisoners, officers and soldiers" during a prison breakout in 2011.

There has been strong international reaction to the storming of the camps.

Supporters of ousted Islamist President Mohammed Morsi, stand among debris and smoke in background as they confront Egyptian security forces trying to clear the smaller of the two sit-ins, near the Cairo University campus in Giza, Cairo, Egypt, Wednesday, Aug. 14, 2013. (Imad Abdul Rahman/AP)

US Secretary of State John Kerry said the events were "deplorable" and "a real blow to reconciliation efforts".

Violence was "simply not a solution" and ran "counter to Egyptians' aspirations to peace and democracy", he said.

EU foreign policy chief Catherine Ashton said in a statement: "We reiterate that violence won't lead to any solution and we urge the Egyptian authorities to proceed with utmost restraint."

Turkish Prime Minister Recep Tayyip Erdogan described the result of the camp clearances as a massacre, accused other countries of paving the way for the violence by staying silent, and called for the UN and the Arab League to act immediately. 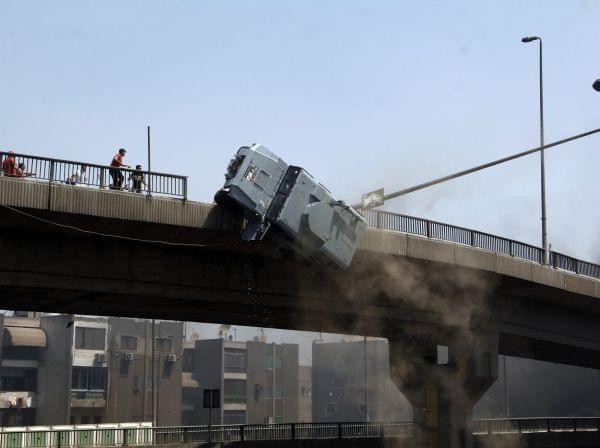 A police vehicle is pushed off of the 6th of October bridge by protesters close to the largest sit-in by supporters of ousted Islamist President Mohammed Morsi in the eastern Nasr City district of Cairo, Egypt, Wednesday, Aug. 14, 2013. (AP Photo/Aly Hazzaa, El Shorouk Newspaper)