The head of Egypt's army has given a TV address, announcing that President Mohammed Morsi is no longer in office. 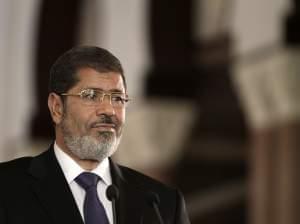 Flanked by religious and opposition leaders, Gen Sisi said Mr Morsi (pictured to the left) had "failed to meet the demands of the Egyptian people".

Anti-Morsi protesters in Cairo gave a huge cheer in response to the speech.

The army's move to depose the president follows four days of mass street demonstrations against Mr Morsi, and an ultimatum issued by the military which expired on Wednesday afternoon.

TV stations belonging to Mr Morsi's Muslim Brotherhood went off air at the end of the speech and state news agency Mena said managers at the movement's Misr25 channel had been arrested.

Minutes later, a notice went up on Mr Morsi's Facebook page denouncing the army move as a "military coup".

The statement asked Egyptian citizens - both civilians and military - to "abide by the constitution and the law and not to respond to this coup".

The ousted leader's current whereabouts are unclear. However, earlier reports said security forces had imposed a travel ban on both him and other leading figures in the Muslim Brotherhood.

'Roadmap' for the future

General Sisi said on state TV that the armed forces could not stay silent and blind to the call of the Egyptian masses. 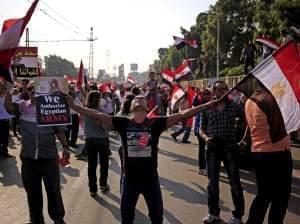 He spoke of a new roadmap for the future, and said that the chief justice of the Supreme Constitutional Court, Adli Mansour, would be given the task of "running the country's affairs during the transitional period until the election of a new president".

After Gen Sisi's address, both Pope Tawadros II - the head of the Coptic Church - and leading opposition figure Mohammed ElBaradei made short televised speeches about the new roadmap for Egypt's future which they had agreed with the army.

Mr ElBaradei said the roadmap aimed for national reconciliation and represented a fresh start to the January 2011 revolution.

"This roadmap has been drafted by honourable people who seek the interests, first and foremost, of the country," added Pope Tawadros.

The army is currently involved in a show of force, fanning out across Cairo and taking control of the capital, BBC correspondent Quentin Sommerville reports.

He described seeing eight armoured personnel carriers heading for Cairo University in Giza, where one of the main pro-Morsi demonstrations was being held.

The tens of thousands of anti-Morsi protesters on the streets of Cairo are now celebrating, with fireworks lighting up the night sky and car drivers honking their horns in excitement.

But Morsi supporters elsewhere in the city are reported to have shouted: "No to military rule.''