Travelling through Amish country, you're likely to see a horse-drawn carriage or two. One Sullivan entrepreneur has transformed the traditional buggy by giving it a touch of solar power.

Larry Yoder’s buggy has four solar panels attached to the roof, which pull in sunlight to power a motor. It goes about eight miles an hour in reverse and 14 forward. It can run about three hours without sunlight. Because this is green technology, Yoder chose green seats.

“Early one morning I thought I got this buggy, and I’ve got access to some solar panels. Why not make it solar-powered?” he said. “As far as I know, it’s the world’s first Amish solar-powered buggy.”

Yoder is not Amish, but used to own an Amish-style restaurant where customers could sit in an authentic buggy. A couple of years ago, after the restaurant closed, he upgraded the buggy with solar power – an idea he got after noticing the Amish using solar energy to power lights on their carriages.

“I’m not really targeting them to change their ways to eliminate a horse or nothing like that. That’s not my intent,” Yoder explained.

Though, Yoder said he believes the solar-powered buggy could catch on in the Amish community in the next five to ten years. Even though they are not currently buying it, he said some Amish business owners did help him build it.

And other communities have expressed interest.

Stella Eads is a tour guide in nearby Arthur, Ill., which has a large Amish population. She gives more than a hundred tours each year to people from all over the world who are interested in Arthur’s Amish community. She says the solar-powered carriage might someday be part of her tours.

“Well, I just envision having it here, close to the shop, and then whenever people want to go out on a tour, just take them out and show them around and give them a true Amish experience, as close as we can get without the horse,” she said.

Yoder said he would like to get his buggy to go faster, so that he can ride it more than a thousand miles away to Sarasota, Fla.

“That’s where we go in the winter time,” Yoder said during a ride in the carriage. “As you can hear going down the road it’s got a little wind to it. I got a GPS. I’ve got cruise control.” 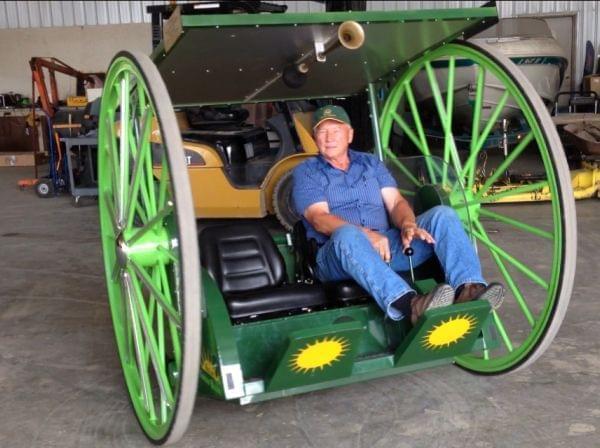 Inside his garage, Yoder has other, earlier solar-powered prototypes. There is a carriage that does not look anything like the one from earlier. He started working on it six years ago. It has two 5 ½ foot giant wheels with LED lights mounted on the spokes, a seat for two people, and a tractor engine. This buggy goes eight miles per hour, but it seems much faster if you are spinning around in circles.

Yoder said he is still perfecting his Amish buggy, and he said he hopes to make it widely available soon.