The next evolution of science is not happening in a lab, but in a basement in a rural Florida county. Thanks to online crowdsourcing, thousands of non-scientists can visit a site called Notes From Nature and lend a hand to university researchers cataloging their collections, from bark to bugs.

Non-scientists help university researchers catalog thousands of specimens, like this one from Florida State University's herbarium.

Bill Stinson, one of those non-scientists, sits at his PC, looking at a picture of a plant he found on Notes From Nature. Stinson's task is to parse the information on an index card associated with each record and then enter the data into nine fields.

Stinson is a member of the Florida Native Plant Society, and has completed more than 50 entries for Florida State University's herbarium, a giant repository of plant species native to the Southeast U.S.

There are more than 5,000 people just like Stinson — all contributing to science one keystroke at a time.

FSU biology professor Austin Mast runs the lab, which contains some species so rare they're only found in a few locations.

The non-scientists who contribute their time to Notes From Nature catalog much faster than his researchers could, Mast says.

"We in the herbarium had databased about 76,000 of our specimens in the last 10 years," he says. "It took 10 days to get through that many on the Notes From Nature site."

Science is no longer as reliant on singular minds like an Einstein or an Aristotle, says Rob Guralnick, one of the website's founders and the zoology curator at the University of Colorado's Museum of Natural History. Contributions like Stinson's are increasingly important.

"We've kind of passed through that phase of our understanding of how to know the world and the ways that one person can transform our understanding of science," Guralnick says. "Now, a lot of the questions that are most challenging and vexing that are left on the table are really about collective intelligence." 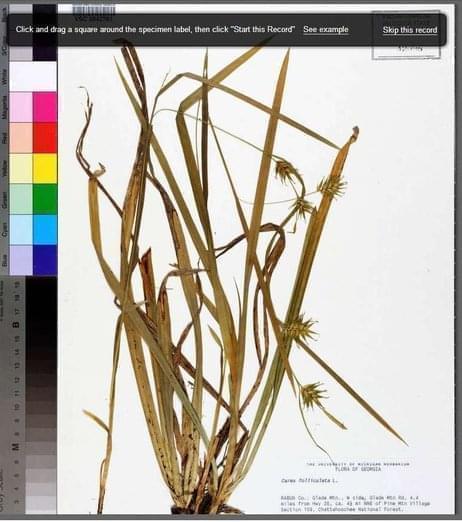 More than 210,000 specimens are housed in rows of green metal cabinets at FSU. Inside are stacks of color-coded folders with a variety of plant specimens.

There's a lot of time and work left, with about a billion specimens in collections like this in the U.S., and an estimated 10 percent of those databased, Mast says.

"We have a 900-million-specimen backlog," he says.

Stinson is ready to transcribe another entry. What pops up next resonates with him.

He's participated in crowdsourced science before, but most of it was passive. Stinson allowed someone in the world to harness his computer's processor to calculate tough problems when he wasn't using it.

Stinson grew up walking out his back door into the woods. Now, even on the days he can't get outdoors, he can help to preserve nature.