The first female member of the Illinois National Guard to die in combat operations overseas was honored this weekend on the University of Illinois’ Urbana campus. Shawna Morrison of Paris, Ill. was killed nine years ago this month in Iraq.

Morrison was a student at the University of Illinois when she died Sept. 5, 2004 at the age of 26 in a mortar attack. In fact, she was the first female student at the U of I killed in a military operation in any war or conflict. She majored in psychology, and planned to enter Officer Candidate School.

She was one of five members of the 1544th Transportation Company killed in combat in 2004.

“Nine years just doesn’t feel like nine years,” said Brandon Tackett, who was Morrison’s commander.  “They say that time heals all wounds, but I’m here to tell you that it doesn’t.”

Tackett said Morrison embodied what it means to be a citizen soldier.

“Soldiers like Shawna Morrison are absolutely, and ready to commit themselves to a higher cause,” he said. “These soldiers serve as guiding lights to the rest of us. They are a special reminder of what really matters in life. ” 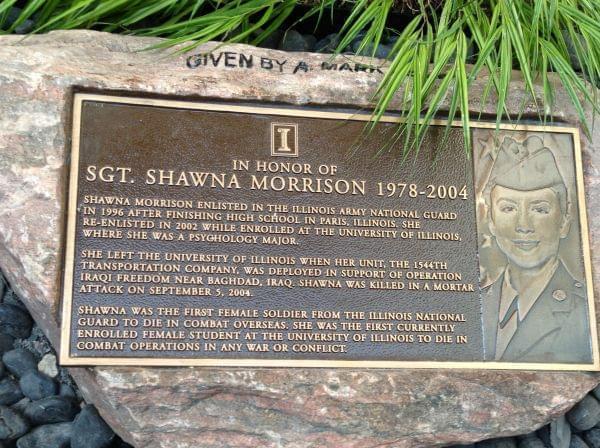 A stone marker located in the courtyard of Lincoln Hall at the University of Illinois at Urbana-Champaign is left to pay tribute to Shawna Morrison. (Sean Powers/WILL)

U of I President Robert Easter, a veteran himself, linked Morrison’s dedication to serving her country to the values of the architects of the Land Grant Act, which led to the creation of the University of Illinois.

“They required that the new campuses provided training in military tactics; training that has been a part of the curriculum on this campus since our inception,” Easter said. “Sergeant Morrison shared that land grant ideal in a sense and her commitment to duty that will serve as her enduring legacy.”

Thomas Lamont attended the U of I, and is now a U.S. Assistant Secretary of the Army. He said the university has a long history of students, like Shawna Morrison, serving – and sacrificing their lives -- in the military.

“Today we pay homage to Shawna Morrison,” Morrison said. “Like those whose names are etched on the pillars of Memorial Stadium, her memory will forever live long, and let us pray that this ceremony to honor a fallen member of our Illini family will be our last.”

Lamont said the best way to honor those sacrifices is to care for and give opportunities to those who have served. He credited the U of I for taking the lead to offer support for students with disabilities, and moving forward with plans to build a center for wounded veterans who are in college. 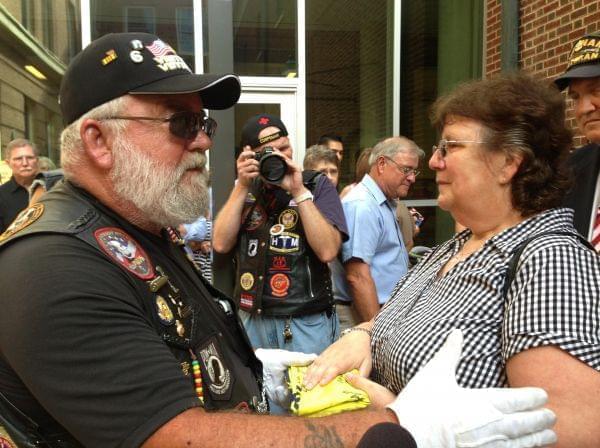 Rick Daley of the Illinois Patriot Guard presents Cindy Morrison with a flag signed by more than 30 members of the patriot guard who came out for the dedication. (Sean Powers/WILL)

Speaking after the ceremony, Shawna’s mother Cindy said she was overwhelmed by the tributes to her daughter.

“Shawna was a soldier to us and she was our daughter, but I was amazed at all this recognition for one child when there’s thousands…I mean of course we knew her, but I didn’t realize the importance like this,” Morrison said. “It was humbling, really humbling, and I’m just thinking Shawna’s up there looking down. ”

A courtyard that is part of Lincoln Hall is now dedicated in Shawna’s honor. There is a stone marker bearing her name, picture, and a short biography – a lasting memory of one soldier who paid the ultimate price.