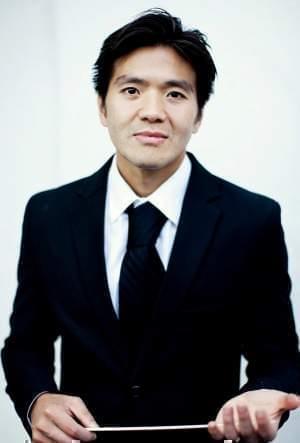 As a teen-ager In the 1990s, Hong, then known as David Hong, organized his own youth orchestra, the Peoria Youth Sinfonietta. The organization lasted for several years, as Hong moved from high school to music studies at Illinois Wesleyan University in Bloomington. One of Hong’s role models was the late Leonard Bernstein, the conductor and composer who spent many years in New York City and wasn’t shy about seeking a mass audience.

A decade and a half later, Sung Jin Hong is himself composing and conducting in New York City, and making music that seeks a mass audience.

One example is “Breaking Bad – Ozymandias, a short music drama which Hong composed in tribute to the TV series “Breaking Bad”. The 50 minute work had its premiere in New York City last January, at a concert of One World Symphony, for which Hong is conductor and artistic director.

Hong says he first learned about the show last year from his sister, and was quickly hooked.

“I realized what people were talking about when they’re saying ‘binge-watching’”, said Hong. “When I was watching the TV show, I didn’t deliberately think to myself, oh I’m going to create an opera. But after the series finale in September, I was so moved and touched, I thought, this would make an amazing dramatic work.”

“Breaking Bad – Ozymandias” has its lighter moments, such as a section Hong calls the “bitch aria”, using audience participation to highlight one of the favorite words of the TV show’s Jesse Pinkman character. And like the TV show, “Breaking Bad – Ozymandias” has very dark passages. One section draws from an episode of the TV series entitled “Fly”, in which an anguished Walter White remembers a peaceful moment with his family, and tells Jesse Pinkman that he wishes his life had ended right there. In words condensed from the TV episode, the singer baritone Jose Pietri-Coimbre at the premiere) sings:

Ah! That was the moment... that night.
I should have never left home.
Maybe things would have…
I was at home watching TV.
Skyler and Holly were in another room.
She was singing a lullaby.
Ah — if I had just lived right up to
that moment and not one second more,
that would have been perfect!

Hong says using a TV show as subject matter for classical music is keeping with past composers who drew on the theater for their work. He compares “Breaking Bad”’s impact to the impact two centuries ago of Johann Goethe’s play “Faust”, which inspired music by Schubert, Gounod, Berlioz and Wagner.

“Vince Gilligan’s “Breaking Bad” is like ‘Faust’ in a way, where (there’s) such a mass, widespread, not even acclaim, but just influence. You hear people talking about it even still, after more than a year of its season finale.

Sung Jin Hong is now preparing another operatic work drawn from pop culture. “Hannibal” is drawn from Thomas Harris’ novels about serial killer Hannibal Lector, and the spinoff “Hannibal” TV series. Like “Breaking Bad – Ozymandias”, the work will be premiered by One World Symphony.

Sung Jin Hong helped found One World Symphony while he was a graduate student at Bard College in New York City nearly 15 years ago. He says he was helped by his past experience leading the Peoria Youth Sinfonietta.

“That was a very important learning experience with the youth orchestra in Peoria, where it was very collaborative”, said Hong. “We were all teen-agers, young and very idealistic. And that’s how actually One World Symphony started as well. We were all in our mid-20s, didn’t know any better.”

One World Symphony has survived any early naivety and launches its 14th season with a pair of concerts on Sunday and Monday, October 26th and 27th. Their performance space is Manhattan’s Holy Apostles Episcopal Church, where the orchestra’s season includes an annual charity concert for the church’s soup kitchen.

The new season is dubbed “Operasodes”, with programs drawing heavily from opera, and themed around TV shows --- the sitcom “New Girl” is the basis this weekend for opera highlights featuring distinctive female characters.  Hong says an upcoming concert will use “Game of Thrones” as its theme. The premiere of “Hannibal” is set for next May.