Family members say former Illinois Gov. Dan Walker has died at age at age 92.  Walker's son Dan Walker Jr. told The Associated Press on Wednesday that his father passed away at his home in California.

Walker was governor of Illinois from 1973 to 1977.  Gov. Bruce Rauner issued a statement.

“Diana and I are saddened to learn of the passing of former Governor Dan Walker," he said.  "Our thoughts and prayers are with his family and friends during this difficult time.” 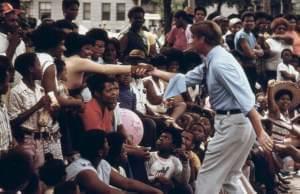 Walker was seen at the time as a new breed of Illinois politician. An attorney, he disdained traditional political organization and won office in 1972 on the strength of his personality. But as governor, he alienated both Republicans and Democrats, accomplishing little.

Walker came to fame in 1971 by literally walking the length of Illinois.

He spent much of his time fighting the Democratic machine. In Illinois in the 1970s, that meant fighting Chicago Mayor Richard J. Daley.

That fight made Walker a one-term governor, and his party wouldn’t regain Illinois’ top job until 2003.

Things got worse out of office.  After a single tumultuous term, Walker also had major legal troubles while the head of a bank. He was sentenced to prison in 1987 for fraudulently obtaining more than $1 million in loans.

Former Illinois Gaming Board chairman Aaron Jaffe was a House lawmaker when Walker took office in the 1970s. Jaffe says Walker was very intelligent and could have gone further in politics than his single term in office if he wasn't so confrontational.

“He fervently believed in the power of democracy and the importance of including everyone in our democracy," said former Illinois Gov. Pat Quinn, in a statement.  "He loved his family and leaves behind many friends. His patriotism, service and compassion will never be forgotten."

Walker is survived by his wife and seven children. Funeral services are pending.

The Maverick And The Machine: Governor Dan Walker Tells His Story