The Freedom Festival will bring the vibrant colors, food and traditions of South Asia to Champaign this weekend. The festival will kick off Welcoming Week, an initiative of the University YMCA’s New American Welcome Center, which works to help new immigrants flourish in the Champaign-Urbana area.

Koeli Goel is executive chair of the Hindu Temple and Cultural Society of Central Illinois, which is hosting the cultural and religious festival. She said the event – which will include food, music and art – will help immigrants from South Asia feel at home in the Midwest, but the festival is meant for everyone.

“It’s my firm belief, and many in my organization share it, that understanding and knowledge are very important in building bridges between two different cultures,” Goel said.

"We are immigrants in the U.S. and we have a firm belief in democracy and the inclusivity of the United States of America," Goel said. "We wanted to celebrate its Independence Day. We also wanted not to forget our mother country."

The Freedom Festival runs from 11 a.m. to 4 p.m. on Saturday at the Champaign Hindu Temple. For more information about the event, and upcoming Welcoming Week activities, visit www.universityymca.com. 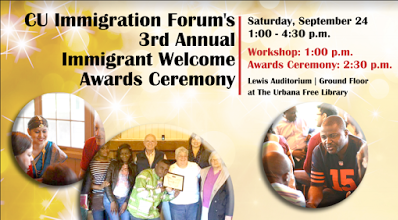 Awards Given For Creating Welcoming Atmosphere For Immigrants In Champaign County

Current Programs and New Directions for the University YMCA