Gov. Bruce Rauner lit a fire under labor unions in Illinois earlier this week when he suggested local governments — like counties or cities — should be able to implement their own right-to-work laws. On Thursday Rauner went one step further, saying government unions should be banned from contributing to political campaigns.

Rauner had largely been silent about unions since winning his primary campaign in March of last year. In the general election, the candidate abandoned his talk of "government union bosses" who he says controls contracts with the state, driving up the cost of business.

Prior to the primary election, unions, fearing for their livelihood under a Gov. Rauner, pushed cash into the campaign of Republican Kirk Dillard, who criticized Rauner's approach to organized labor. But that last-minute infusion didn't propel Dillard to the top, though the election was closer than many polls showed.

But this week, that talk (and that phrase) is back. 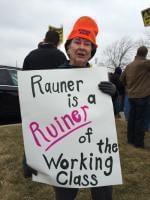 The governor says he plans to outline restrictions on political contributions from labor unions in the next week.

"Groups that contract with the state should not be making campaign contributions to the people across the table from whom they're negotiating," he said. "That's a fundamental conflict of interest."

But outside the Champaign hotel where Rauner made his remarks, 150 local labor members thought otherwise.

"Surely we didn't elect someone who was stupid enough to believe that the working people of Illinois caused Illinois' problems," he said. "So surely they're going to see through that his motives must be different."

Rauner says he'll give more details in his State of the State speech next week.