Governor, Leaders Set To Meet, After Combative Campaign And A Day Of Posturing

The governor and Illinois' top leaders are set to meet Tuesday morning, after Republicans on Monday accused Democrats of a dereliction of duty.

It's been one year, four months and 15 days since the state of Illinois had a regular budget.

If you're wondering why Illinois' top politicians haven't been able to do something as important as passing a budget, here's a clue: They have a hard time even agreeing on when to meet.

Gov. Bruce Rauner's office made a big deal of wanting a meeting Monday with the legislative leaders.

Except one of them -- House Speaker Michael Madigan -- cited an unspecified conflict.

Without Madigan, the Democratic Senate President said he wouldn't go either, because it was pointless without all four leaders in attendance.

Rauner and the Republican leaders met among themselves, then afterward wouldn't talk about what they'd discussed. Instead, they used the opportunity to frame themselves as proactive, while criticizing Democrats' absence.

"I can't imagine what conflict is more important than the challenges facing the people of this state," she said. ""This is all game playing. This is all avoiding the issue," Senate Minority Leader Christine Radogno said. "They need to figure out what they're going to do now to stymie the governor and people in this state who want things to move forward."

Just hours after all the fuss, all four leaders agreed to meet with the governor Tuesday morning.

Of course, they could meet all day, every day, but a deep philosophical divide remains. That's the other big clue behind Illinois' missing budget.

Rauner has said he won't agree to a balanced budget until Democrats first adopt his legislative agenda. But Democrats have said they would never go along with Rauner's anti-labor proposals - they argue the plan would weaken the middle class. 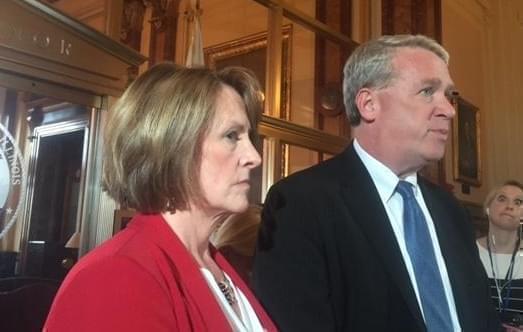 Post-Election Off To A Rough Start For Illinois’ Top Leaders