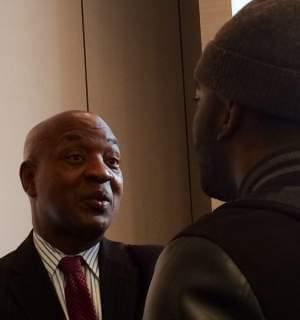 The deaths this summer of two African American men at the hands of white police officers again brought racial tension to the national spotlight; The death of unarmed black teen Michael Brown in Ferguson resulted in a decision to not indict Officer Darren Wilson last month, and on Wednesday, a grand jury in New York decided to not charge NYPD Officer Daniel Pantaleo in the choking death of Eric Garner.

Protests and rallies nationwide aim to drive home the same point: Racial inequality is alive and well, and exacerbated by the American justice system.

Ogletree was on campus Wednesday, where he led a talk sponsored by the University of Illinois' African American Studies Department.

The professor told his own anecdotes of being racially profiled, saying that despite his success in life, he's still subjected to being pulled over under suspicious circumstances, or looked at with a presumption of guilt.