A couple of years ago, two people in Urbana were hit by darts fired from a blow-dart gun. They weren't seriously injured. That’s not what this story is about.

The attacks were so random, and frankly so weird, that most people found them humorous. One of those happened to be a middle-school teacher, who posted a comment on Facebook.

“I made a joke, in my status, that wouldn’t it be nice if they knew my un-medicated students, what they needed and could just take care of it," the teacher says. "It was an obvious joke, because I don’t know any blow-dart snipers. And I got pulled in for that.”

By “pulled in,” she means that she was summoned to the administrative office. School officials confiscated her computer and searched it to make sure she hadn’t posted the comment during school hours, or using school equipment, which she hadn’t.

“I was violated, basically," she says. "I feel violated. I don’t feel like we have freedom anymore.”

And that’s why she doesn’t want her name used here. Aside from that, she wasn’t punished.

“It was nothing. It was like a slap on the wrist — Hey don’t make jokes! — I’m like 'Okay!' ” But it did change the way she used social media. “That’s when I took down my job," she says, "and deleted most of my co-workers….”

She also deleted any personal friends who happened to be related to any student at her school, because she realized that school administrators hadn’t been monitoring her account — someone she was friends with had seen her post and complained.

Her experience illustrates the uneasy relationship many teachers have with social media — and that is what this story  is about. You might think it would be simple: Just follow school policy. But I talked to more than a half-dozen teachers, in different districts, and they all said their schools had no written guidelines.

“I know that we’re not allowed to use it from our network at school, but I don’t believe there’s anything in writing," says Craig Pond, who teaches 6th grade science at Urbana Middle School. Age 30, he has been on Facebook since it was invented, but being a teacher means he thinks twice before posting anything. For example, he recently used Facebook as an accountability tool while he completed a rigorous three-month exercise program. When other people in the same program posted their before-and-after snapshots, many stripped down to underwear to show off their improved physique. But Pond, who lost almost 50 pounds, posted only modest photos, even though he has locked his Facebook page and buried the key.

“Just the other day, a neighborhood kid that I’ve been playing golf with said ‘I tried to get you on Facebook but I couldn’t even friend request you,’  ” Pond says.

Ted Morrissey, who teaches English at Williamsville High School, has been on Twitter since 2007, and Facebook for several years. From the beginning, his personal policy has been to accept all friend requests from students and their parents, because his social media persona mirrors his teaching persona.

“I’m just who I am, and teaching and reading and writing and discussing those things are all a big part of my personality," Morrissey says. "So those have been my main focus on Twitter and Facebook and so on. Not that I don’t post the occasional pictures of my dog or something….”

Morrissey was the only teacher I talked to who took the friend-everyone approach. A more typical reaction was the one I got from Miranda Sellers, a social worker at Springfield Southeast High School. She connects with students only after they've graduated. But Facebook came in handy for Sellers in the case of a student facing long-term hospitalization.

“And so I wanted to be able to keep in contact with the parent, and at the time, Facebook was just the easiest method," Sellers says. "With Facebook, you can use it just like texting, you know, so without giving a personal number — which I’d prefer not to do.”

Christopher Bronke, chair of the English department at Downers Grove North High School, has a completely different attitude toward social media. He realized that his students weren’t fully engaged with their reading homework, but they all seemed fired up by class discussions. So Bronke had his kids set up Twitter accounts, and tweet using the class hashtag while they read their homework.

“They were able to talk about the book as they’re going, ask each other questions, clarify things for one another, and just kind of have a conversation about it,” Bronke says.

Bronke’s innovation — which cost nothing, by the way — has been featured in The Atlantic. But most educators are still struggling with that uneasy relationship with social media.

“It’s a battle I fight. I mean, you know, I’m department chair," Bronke says. "I have 21 teachers I oversee, and none of them are doing this.” 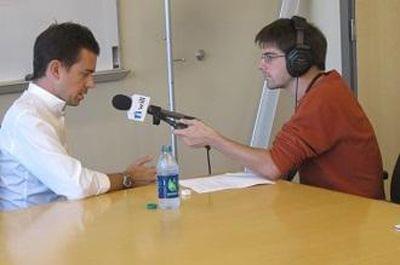 Knowledge in the Age of Social Media