The Illini men beat No. 5 Michigan 71-62 last night in Champaign. Reigning Big Ten Freshman of the Week Kofi Cockburn notched another double-double, with 19 points and 10 rebounds.

Ayo Dosunmu, Giorgi Bezhanishvili and Andres Feliz added 14, 13 and 12 points respectively in a game that was remarkably low-scoring for two teams who both like to push the tempo.

“I think every game develops its own identity. You take opportunities when they’re there," Underwood said. "I guess you’re gonna have a fairly ugly game when teams shoot like they did from the three (point line) and not have a ton of points.”

Michigan was hitting 40-percent of its three-pointers coming into the game, and half its shots from the floor. But the Illini held them to 3-18 from behind the three-point arc, and 44-percent overall.

Bezhanishvili said the team paid strict attention to its scouting reports after last week's let-down against Miami, and recognized Wolverines plays, in real time, as they were called from the Michigan bench.

"I looked at their coach, and he called out a play," Bezhanishvili said. "The whole entire team knew the play because we were really dialed in, watched a lot of film."

Illinois was actually worse than Michigan from three-point range, converting only one of eleven attempts. But the main offensive focus for Illinois was in the paint, where the Illini scored 44 points to Michigan's 26. The Illini dominated the glass with similar numbers, winning the rebound battle 44-28.

The game was marred by an injury to referee Lewis Garrison, who suffered a head injury when he ran into the path of an inadvertent, celebratory wheelhouse punch thrown by Cockburn after a rebound basket.

Cockburn apologized to Garrison after game.

“In that moment, you know, we were winning and we were up, and it was basically me being passionate, you know, about the game," Cockburn said. "And unfortunately, I hit him, and I went to see him after and told him I was really sorry about it.”

The Illini now have a couple of days off for finals. They'll return to action Saturday night against Old Dominion.That game tips at 8 pm. 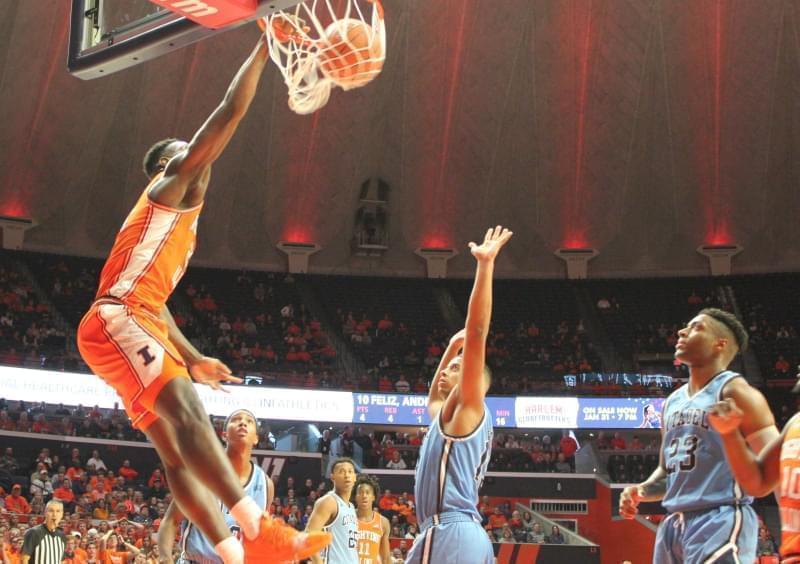