State is Swamped by Applications, Delaying Coverage for Months
Listen

The Affordable Care Act expanded eligibility for Medicaid. The number of applicants for the program in Illinois since late 2013 has overwhelmed state employees --- meaning the wait for Medicaid benefits to begin can take months.

The delay has caused problems for applicants who expected their benefits to begin in weeks, but instead have been waiting for months.

Three such applicants made their applications for Medicaid with help from Champaign County Health Care Consumers, which referred them for this news story. Their healthcare needs are different, but all were affected by the delay.

Zivar Guyot applied for coverage for herself and her three children on Dec. 5. Later that month, with the application still pending, the Champaign electrician paid out of pocket when one of her daughters saw a doctor at a Carle Convenient Care clinic for strep throat. But three months later, when Guyot’s daughter had to go to Carle again, the state was clearly late in processing the application.

“She needed to go again in March,” explained Guyot, “and that time, they told me that I should just bring my Medicaid card when it comes through, and they would apply those retroactively. So, I’m just saving the bills on that one.”

Waiting is all patients and doctors can do, while the Illinois Department of Healthcare and Family Services struggles to process the larger than expected number of Medicaid applications.  At Promise Healthcare, which operates the Frances Nelson Healthcare Center in Champaign, executive director Nancy Greenwalt says they’ve resolved to provide health care to patients with pending applications. She says whenever the applications are processed, coverage will begin retroactively, back to the first of the year, or the date of application, if it falls later.

“We learned pretty quickly at the beginning of the year that it wasn’t going to be, what we had budgeted and projected,” said Greenwalt. “And so we’ve made adjustments.”

Greenwalt says one adjustment is paying extra attention to when Medicaid applications are finally processed, so they can send a bill to the state immediately. Claudia Lennhoff of Champaign County Healthcare Consumers says many doctors’ offices are making such adjustments for their patients.

“But, I think where we’re seeing a greater impact on those clients is when they go the pharmacy,” said Lennhoff.

Lennhoff says that patients in Medicaid application limbo usually have to pay for prescription drugs themselves, or just wait until their application is processed before they can obtain medications. That’s a concern for one Urbana resident, who requested that her name not be disclosed, for fear that her pre-existing condition could hurt her chances in the job market. Her last fulltime job ended in 2012, and her COBRA benefits ran out earlier this year.  Once her Medicaid application is processed, she’ll have to find a new specialist, because her current one is in St. Louis, and not covered by Illinois Medicaid. But right now, she’s more worried about her maintenance medications. Without them, she says she would be completely debilitated --- and she has less than a two months’ supply on hand.

“Once my medications run out, I won’t have those maintenance drugs either,” said the applicant, who says she’s using a substitute medication because her supply of another medicine is already depleted.

The Urbana applicant and Zivar Guyot have both been waiting longer than the 60-to-90 days the Illinois Department of Healthcare and Family Services is currently telling Medicaid applicants to expect.

Champaign resident Jim Bean also waited longer than 90 days. But he says his Medicaid coverage is official now, although only after Champaign County Health Care Consumers made a phone call to HFS on his behalf (HFS spokesperson Joannè von Alroth says the department expedites such cases as a matter of practice). Bean is unable to work due to hearing loss and back problems, following years working as a rock musician and stage rigger. In recent years, he relied on Carle’s Community Care program for discounts on healthcare, and borrowed money from friends to pay for prescription drugs. Now, with Medicaid coverage, Bean’s he’s optimistic about the future.

“I’m not worried or concerned any longer about not being able to do maintenance on my health,” said Bean. “And let’s hope that I don’t need to go to the emergency room. But I know that if I do, it’s not going to break me.”

But for many Medicaid applicants in Illinois, the wait to get their applications processed will continue. Healthcare and Family Services spokesperson Joannè von Alroth says that as of last week, her department had processed more than a quarter million Medicaid applications, but had another half-million applications waiting. She’s not making any predictions on when they’ll be caught up. 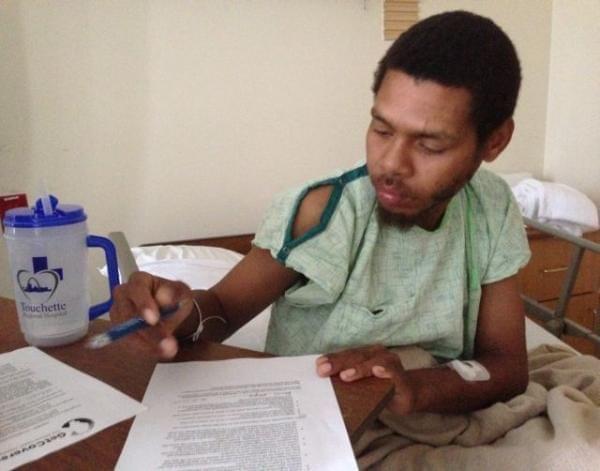