Egypt's interim leader has outlined his timetable for new elections, amid continuing unrest in the country.

Adly Mansour's decree envisages changes to the Islamist-drafted constitution and a referendum, which would pave way the way for elections early next year.

This comes as at least 51 people were killed in the capital Cairo.

The Muslim Brotherhood says its members were fired on at a sit-in for ousted President Mohammad Morsi. The army says it responded to an armed provocation.

Mr Morsi, an Islamist and Egypt's first freely elected leader, was removed from office by the army last week after mass protests.

His supporters accuse the military of staging a coup, but his opponents say the move is the continuation of the revolution that deposed President Hosni Mubarak in 2011.

It says that a panel to amend the constitution - which was suspended last week - would be formed within 15 days.

The changes would then be put to a referendum - to be organised within four months.

This would lead to parliamentary elections - which could be held in February.

Finally, presidential elections would be called once the new parliament convenes.

The Muslim Brotherhood has so far made no public comment on the proposed timetable.

Mr Mansour's move comes amid continuing mass protests by both supporters and opponents of Mohammad Morsi.

Against this background the idea of new elections looks bizarre, but the hope is that the opposing side could come up to some sort of compromise, the BBC's Jim Muir in Cairo reports.

Meanwhile, the United States has condemned the violence in Egypt, calling for "maximum restraint".

A White House statement said Washington was "not aligned" with any political movement, adding that cutting military aid to Egypt was not in US interests.

There were conflicting reports over what happened outside the Presidential Guard barracks in Cairo on Monday morning.

The Muslim Brotherhood put the number of dead at 53, and said children were among the victims.

Later, in an emotional news briefing, members of the Muslim Brotherhood accused military chief Gen Abdul Fattah al-Sisi of being "an assassin and a butcher".

The health ministry said at least 51 people were killed and 435 people wounded.

He said that two police and one soldier were killed in the exchange of fire. Eight soldiers were critically wounded.

The spokesman added that one soldier had been shot through the top of the head from above, indicating that snipers were firing from high buildings.

Col Ali also disputed claims that children had died, saying pictures of dead children posted on the internet were in fact images taken in Syria in March.

Mr Morsi is believed by the Muslim Brotherhood to be held at the barracks, but the military says he is elsewhere. 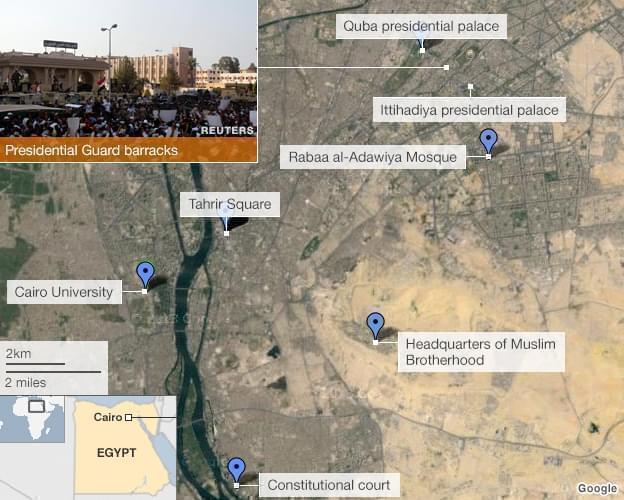