TEHRAN, Iran  - The Pentagon is confirming that Iran has launched ballistic missiles at two targets hosting U.S. military and coalition forces in Iraq.

Defense Department spokesman Jonathan Hoffman said in a statement that “more than a dozen" ballistic missiles have been fired from Iran at two Iraqi military bases.

“It is clear that these missiles were launched from Iran and targeted at least two Iraqi military bases hosting U.S. military and coalition personnel at Al-Assad and Irbil,” read the statement.

There was no immediate word on injuries.

Iran initially announced only one strike, though U.S. officials confirmed both strikes.

The Federal Aviation Administration is barring U.S. pilots and carriers from flying in areas of Iraqi, Iranian and some Persian Gulf airspace. The agency is warning of the “potential for miscalculation or mis-identification” for civilian aircraft amid heightened tensions between the U.S. and Iran.  Such restrictions are often precautionary in nature to prevent civilian aircraft from being confused for ones engaged in armed conflict. 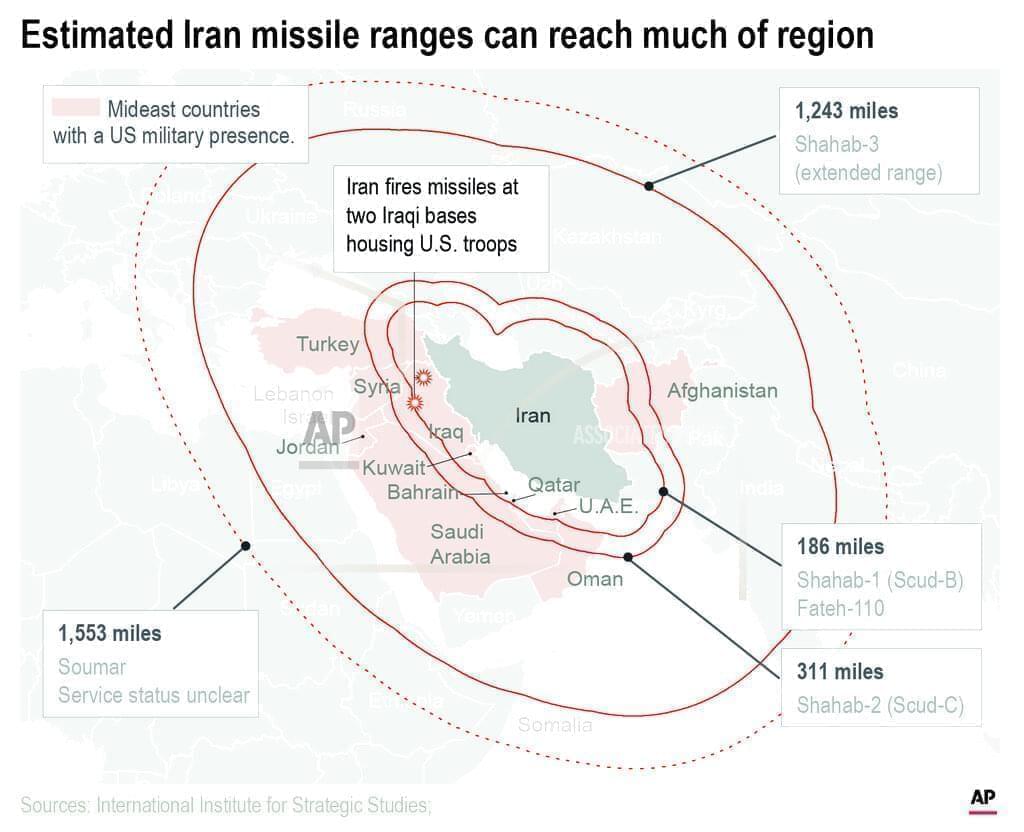 Iran’s Revolutionary Guard is warning the U.S. and its regional allies against retaliation.

The Guard issued the warning via a statement carried by Iran’s state-run IRNA news agency. The Guard also threatened Israel.

The White House issued a statement saying: “We are aware of the reports of attacks on US facilities in Iraq. The President has been briefed and is monitoring the situation closely and consulting with his national security team.”

Justin Goodman, a spokesman for Schumer, says the New York Democrat is closely monitoring the situation and is praying for the safety of service members and other personnel.

Pelosi spokesman Drew Hammill tweeted that the speaker returned a call from the vice president moments after presiding over the House.

After the missile strikes, the Federal Aviation Administration announced it was barring U.S. pilots and carriers from flying in areas of Iraqi, Iranian and some Persian Gulf airspace.

The agency is warning of the “potential for miscalculation or mis-identification" for civilian aircraft amid heightened tensions between the U.S. and Iran.

Such restrictions are often precautionary in nature to prevent civilian aircraft from being confused for ones engaged in armed conflict.

Earlier, Iranian state TV said a stampede at the funeral for a top general slain in a U.S. airstrike has killed 56 people and injured 213 others.

Thousands of mourners had surrounded the coffin of Revolutionary Guard Gen. Qassem Soleimani in his hometown of Kerman when the crush occurred.

There was no information as to what had set off the stampede.

Online videos showed people lying lifeless on a road and others shouting and administering CPR.

The deaths came as more angry calls rose from Iran to avenge Soleimani’s death. The U.S. continued to reinforce its own positions in the region and warned of an unspecified threat to shipping from Iran in the region’s waterways, key routes for global energy supplies.

U.S. embassies and consulates from Asia to Africa and Europe issued security alerts for Americans.

Soleimani’s burial was delayed, with no new time set for it.

Earlier in the day, Hossein Salami, the leader of Iran’s Revolutionary Guard, threatened to “set ablaze” places supported by the U.S. over the killing of Soleimani, sparking cries of “Death to Israel!”

United States officials had been braced for Iran to respond to the killing of its most powerful general.

They’re noting heightened levels of military readiness in the country and are preparing for a possible attempt on the life of an American military commander. The U.S. is reinforcing its positions in the region.

President Donald Trump ordered the Jan. 2 strike against Soleimani after the death of an American contractor in Iraq.

Trump and his top advisers are being pressured to disclose more detail about the intelligence that led him to order the killing. He contended Tuesday that his decision saved American lives and that members of Congress will be briefed soon on what led to the attack.

Hours later, Iran struck back, firing a series of surface-to-surface missiles at two Iraqi bases housing U.S. troops and warning the United States and its allies in the region not to retaliate.

Earlier Tuesday, Defense Secretary Mark Esper told reporters at the Pentagon that Iranian threats against Americans were “'days away" from being executed when Soleimani was killed. Democrats are calling for more information to be declassified.

Soleimani’s killing Friday in Baghdad has drastically raised regional tensions and escalated a crisis between Washington and Tehran.

Iran’s foreign minister claimed Tuesday that the U.S. has declined to issue him a visa to attend UN meetings in New York amid the tensions.

Oil tankers were targeted in mine attacks last year the U.S. blamed on Iran. Tehran denied being responsible though it did seize oil tankers around the crucial Strait of Hormuz, the narrow mouth of the Persian Gulf through which 20% of the world’s crude oil travels.

Iran already said it will no longer honor any of the limits of its 2015 nuclear deal with world powers, an accord Trump withdrew from in May 2018.

Trump ordered the strike against Soleimani after the death of an American contractor in Iraq.

The killing of a top Iranian general has ratcheted up the anxiety of families of Americans held in Iran. Just a month ago the release of a New Jersey student had given them hope.

The Trump administration has made a priority of bringing home hostages held abroad. But the prospect of a speedy resolution for the handful of captives in Iran seems to have dimmed with the two nations edging dangerously close to conflict and warning of retaliatory strikes.