The man convicted of murdering University of Illinois visiting scholar Yingying Zhang will spend the rest of his life in federal prison “without release”. That was the sentence imposed by U.S. District Judge Jim Shadid Thursday, after a jury spent about nine hours deliberating before determining they could not reach a unanimous verdict on the death penalty for Brendt Christensen.

The jury result was not a complete shock. Half an hour before reporting their results, jurors sent a note to Judge Shadid, asking what to do if they could not all agree on a single verdict. That divided verdict was the one read aloud by the judge at the sentencing announcement. Jurors were unable to reach a unanimous decision on whether to sentence Christensen to life in prison, or to death by lethal injection. In such cases, federal law calls for the life sentence to be imposed.

Christensen showed little reaction to the jury’s finding, except to look at his family and offer a slight smile  His mother, Ellen Williams, was crying. At least one juror was in tears as well. For the entire jury, the trial had been a long commitment. Sixteen people were seated for the Christensen trial about 5-weeks ago. They had slightly more than a week’s recess between the guilt phase of the trial, and the sentencing phase.

Judge Shadid remarked on the nature of the crime at the heart of the trial, about 80 minutes later, in the formal sentencing hearing. About ten of the jurors stayed on to watch, filling the back seats of the courtroom gallery at the federal courthouse in Peoria. “This inexplicable act of violence has taken its toll on so many, first and foremost the Zhang family,” Judge Shadid said.

Shadid referred to Christensen’s actions on June 9, 2017. Surveillance video recorded that day showed Zhang, trying to catch a bus to look at a new apartment, getting into Christensen’s SUV. She has not been seen since. Christensen, in a conversation recorded by his girlfriend for FBI investigators, said he took Zhang to his apartment, raped her and brutally killed her. At the trial, FBI agents presented evidence of blood in the apartment, and attempts to clean it up. But Zhang’s body has not been found.

Christensen was represented by public defenders who admitted his guilt in the opening statements of his trial, and concentrated on persuading jurors to spare him the death penalty. They presented testimony from family, friends and teachers, focused on his struggles with mental illness (although a formal mental illness defense was withdrawn before the trial began), and argued that his murder of Zhang was one terrible incident in a life that was otherwise a positive one.

The defense portrait of Christensen seemed to evaporate as Judge Shadid went on in his sentencing statement to say, “the Zhang family, who may never know where their daughter’s remains now rest, must live with the thought that Yingying was ripped away from them by a total stranger, thousands of miles away, fulfilling his self-absorbed and selfish fantasies with no regard, yet to this day, for anyone but himself.”

Shadid told the defendant the jury’s verdict is in effect “a death sentence, but a natural death as opposed to the death you imposed on Yingying Zhang.”

Zhang’s family had stated during the sentencing phase of the trial that they wanted the death penalty for Christensen. But Zhang’s father, Ronggao Zhang, told reporters they respected the jury’s decision.

“We accept that he (Christensen) will spend the rest of his life in prison, which still reflects our loss in a meaningful way,” said Zhang, his Mandarin translated to English by attorney Zhidong Wang. “We hope that every day he spends in prison, he feels the pain and the suffering that we feel for the loss of Yingying.“

Mr. Zhang’s wife, Lifeng Ye, showed the family’s loss the most. She had rarely appeared in court during the trial, not since her attendance at a pre-trial hearing led to an emotional confrontation with Christensen, and demands that he tell her what he had done with her daughter. Appearing with her husband before reporters, Yingying’s mother was tearful, relying on the physical support of another relative to remain standing.

The family’s wish to bring Yingying Zhang home to China remains their paramount goal, the only way, they say that they can have “peace or closure”.

“We ask the defendant to unconditionally tell us what he knows about Yingying’s location,” said Mr. Zhang through attorney Wang.  “If you have any humanity left in your soul, please help end our torment. Please let us bring Yingying home.”

Wang, a Chicago attorney and Urbana attorney Steve Beckett have been helping the Zhang family since they first came to Illinois in June 2017, shortly after Yingying’s disappearance. In their own post-sentencing statement, read by the two in English and Mandarin, Wang and Beckett thanked all those who “have been committed to justice for Yingying.”

Beckett’s voice cracked when he said, “while the verdict in this case brings Yingying’s family some comfort, they won’t have closure unless or until they are able to bring Yingying back home. That has been their goal all along. We share the frustrations of many that Yingying’s remains have not been found. ”

Brendt Christensen said in the conversation that his then-girlfriend Terra Bullis secretly recorded, that Yingying Zhang’s body ”will never be found.” But John C. Milhiser, the U.S. Attorney for Central Illinois, who oversaw the prosecution of Christensen, said investigators have not stopped looking.

“The efforts to locate Yingying have not stopped,” said Milhiser, “and they’ll continue.”

The murder of Yingying Zhang and the conviction and sentencing of her killer drew the attention of Chinese-speaking people around the world, who were shaken by the senseless attack on a student in a country that has seen a growing number of Chinese students in recent years.  The attention was reflected by the Chinese-language news media that came to Peoria Thursday to cover the sentencing.

Another reflection of the story’s wide reach was the presence of Chinese consular officials from Chicago. They attended the sentencing, and issued a statement that seemed intended to assuage fears about studying in the U-S.  In a statement read in Chinese to reporters, deputy Chinese consul general from Chicago, Bian Zichun, expressed satisfaction that justice had been done, thanked the prosecutors and investigators, and expressed “hope that students studying and living in the United States have a safe experience.”

Christensen has 14 days to file a notice to appeal his sentence.

UPDATE: This article has been revised to identify deputy Chinese consul general Bian Zichun. Thanks to Alan Montecillo for translating the statement. - JM 7/19/19 2:35 PM 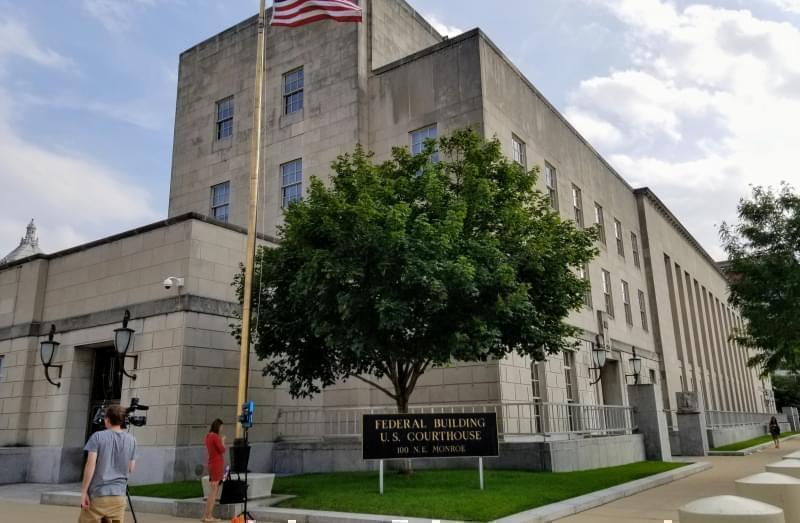