Central Illinois is home to several Little Free Libraries, outdoor boxes filled with books,  free for anyone to take, or add to.

The people who own these Little Free Libraries are called stewards, because their book collections take on a life of their own. That’s what Cara Finnegan found out when she set up her Little Free Library last year on her front lawn in a quiet Champaign neighborhood. On the day I came by, the book assortment ranged from Stephen King and Tom Clancy to children’s picture books and a field guide to birds. Cara says she and husband filled their Little Free Library with their own books at first --- inviting others to take a book and leave their own.

“Within a couple of days, things disappeared and appeared”, said Fennegan. “And it was really fun to kind of see people discover it, and nobody quite knew what this was and what it was supposed to be. It, like, suddenly belonged to the neighborhood. And so in there right now, there’s maybe four or five books that I know came from us. Everything else is things people bring by.”

Cara Finnegan says she’s had no problems with vandalism, or even inappropriate books at her Little Free Library, which looks a bit like an oversized birdhouse mounted at eye-level, with a big front window --- actually a door – that reveals the books inside. It’s listed on the Little Free Library website, along with two others in Champaign. 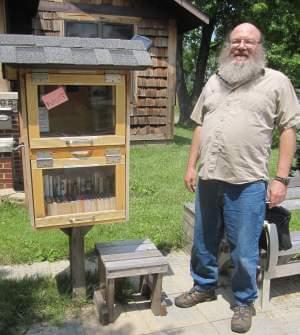 Mike Lehman’s little outdoor library on his front lawn in Urbana (pictured left) is not listed, because he thinks of it as something different --- a nuz/box (pronounced “news-box”).  It’s a two-level box, with a shelf for books, but also a separate box for pamphlets, newspapers and community notices.

“My idea is getting information out there”, explains Lehman, “that people can, you know, decide for themselves where to get their information, what to think about that information in the media and stuff. That’s a good thing to do, is to think about what’s in your media.”

While Cara Finnegan ordered a pre-built Little Free Library online, Mike Lehman built his own, adding a bench and a small trash can to make it more inviting. 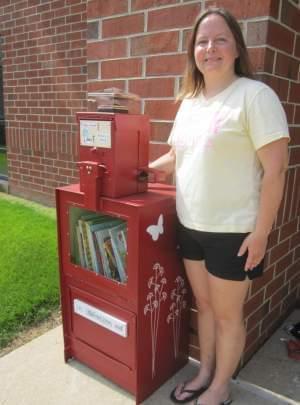 Another Little Free Library in Mahomet is made from a newspaper vending box. It’s not in someone’s front yard, but outside Sangamon Elementary School. It’s looked after by school librarian Amy Webb (pictured left), who says she fills it with donated books --- children’s books only--- to give kids an extension, and even an alternative to the school library. She says the Little Free Library books include titles not necessarily found in the Sangamon School Library.

“In our collection, we don’t maybe have some of the Disney Princesses-type books, or the books based on TV shows”, said Webb. “But in here (the Little Free Library) we do. So, it’s something a little different than they would find in their school library.” 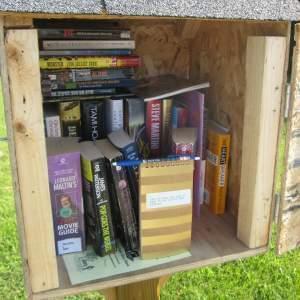 (Pictured left, contents of the Little Free Library located outside the Casey's General Store in Warrensburg)

Librarian Lacy Wright says that at a time when the Internet is changing the way many people read, the low-tech, no-rules Little Free Libraries have their own special appeal.

“They’re cute little miniature houses that hold fun materials”, said Wright. “And I think that unique aspect of it is just what draws people. And people who like to read love to share their favorite books. They want to tell somebody about it. And, there’s still a lot of people that buy books, clearly, because we keep getting donations. They keep bringing them to us.” 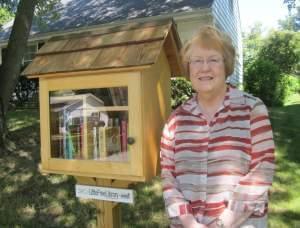 While the love of reading plays a role, another reason that the Little Free Libraries have taken off may be that physical books have an appeal that books read from a screen do not.

So says Judith Selle, who set up a Little Free Library on her lawn in Decatur’s South Shores neighborhood (pictured left).

“There’s something about holding a book in your hands and turning the pages”, said Selle. “And it’s been shown that small children, when they have the advantage of turning the page, in their brain, it sets up neural pathways, and it’s part of the learning process of coordination. I know that e-books, you swipe the page, but it’s not the same as turning a page, that physical motion.”

The Internet and its impact on us, is still growing. But the Little Free Library stewards that I talked to all said they plan to keep them going indefinitely.

Margret Aldrich has written about the Little Free Library movement for the Utne Reader and the Atlantic, and is now working on a book on the subject. She talks with Illinois Public Media's Jim Meadows.