The Moody's credit rating agency has downgraded $26.8 billion in Illinois' general obligation bonds, saying the move was due to the state's weakening financial position during the year.  On Monday, Fitch Ratings downgraded its rating on the state's outstanding bonds.  Both are tied to Illinois' budget stalemate.

In lowering the bond rating to Baa1 from A3 on Thursday, Moody's Investors Service said its expectation is that the ongoing stalemate on the budget due July 1 will lead to further deterioration of the state's finances.

Democratic House Speaker Michael Madigan says it's nothing to claim victory about, or to ignore - and shows Illinois should focus on passing a budget.

Those are the changes Gov. Bruce Rauner wants made before he'll talk with Democrats about balancing the budget.

Rauner's office says he's not beholden to credit ratings agencies and that his agenda will help Illinois long-term. The lower a state's credit rating, the tougher - and more expensive - it is to borrow money.

In its announcement, Moody's said Illinois' structural budget imbalance, accounts payable, and other obligations "are back-tracking, despite a favorable economic climate, leaving the state more vulnerable to the next economic downturn,'' barring swift corrective actions. 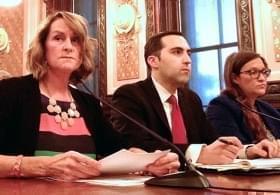