More Illinois Farmers Are Embracing High Tech Ag ― But Is ‘Big Data’ Too Much Like ‘Big Brother?’

Farmers have been collecting data about their farms for decades.

Now all those data are going high tech. Major agricultural companies like Monsanto, John Deere and DuPont have been developing more ways to mine that than ever before – all in the name of helping farmers make better decisions about when to plant, what to plant and how much.

It’s called big data, data farming or precision farming. And many believe it’s the next revolution in agriculture. With 9 billion people expected to be on the planet by 2050, experts say it’s important to produce as much food as possible out of every acre. 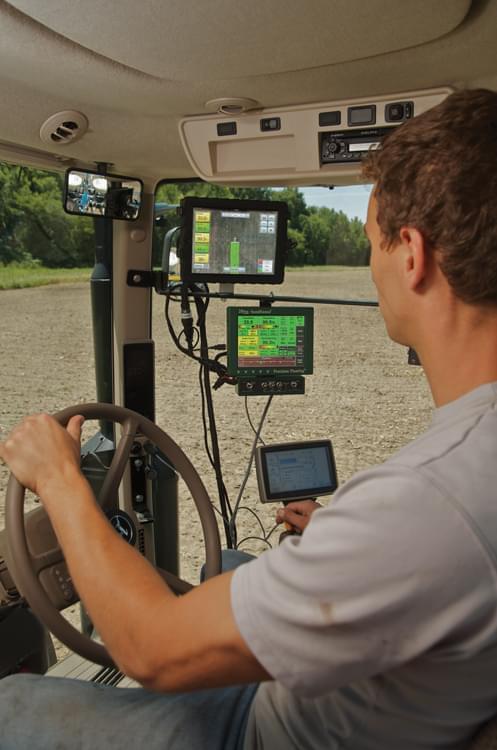 A farmer uses Monsanto's FieldScripts program to plant his field. (Courtesy of Monsanto)

When it comes to technology 34-year-old Jeff Heepke is an early adopter.

"We’re always looking for that next thing," said Heepke, who farms with his dad and two brothers outside Edwardsville.

Last summer the Heepke farm was a part of a trial for Monsanto’s FieldScripts. The service takes historic yields, soil type, and elevation and helps farmers decide what corn hybrid to plant and what seed population. A GPS-guided planter does the rest, with the help of the FieldScripts software. 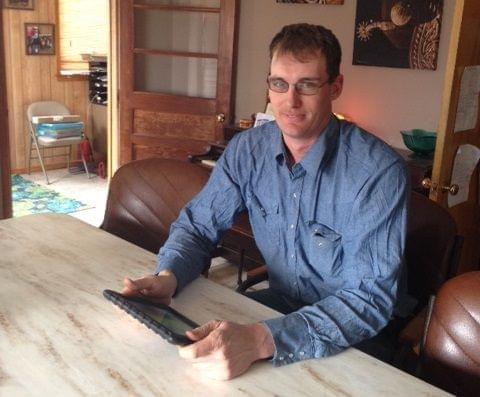 Finally I had a tool that would help me make that decision," Heepke said. "I knew there were better parts of the field. I knew there were poorer spots in the field, but I couldn’t control it on my seeding rates before."

While farmers once made decisions on a field by field basis, Heepke said FieldScripts helped him get down to making decisions on about a 30-square-foot basis. Monsanto launched the program this spring in Illinois, Iowa, Indiana and Minnesota and is charging farmers $10 an acre.

Predicting the weather, field by field

The Finfrocks farm about 8,000 acres of corn and soybeans in central Illinois. It's a family operation ― the couple run it with just their son and one employee.

To farm all that land with just four people, the Finfrocks rely on some pretty high tech equipment. Their planter can seed an 80-foot swath on one pass through the field. It automatically stops planting at the end of a row, so they don't plant the same ground twice. And on the straight-aways it can steer itself using GPS technology.

But Shelley Finfrock said there’s one thing no amount of technology can control: the weather. “Weather’s probably the most important thing and the most uncontrollable thing,” Finfrock said.

The problem is rainfall varies a lot ― even from field to field. And since the Finfrock’s farms are spread out across five counties, they can waste a lot of time driving out to a field, only to find out when they get there it’s not fit to plant.

So for the past year, Finfrock has been beta-testing an online service called Climate Basic. 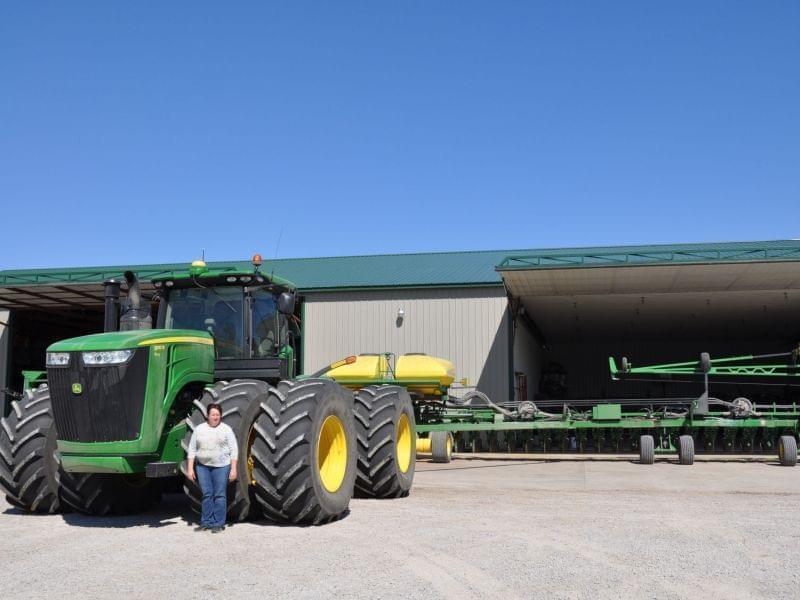 Shelley Finfrock stands in front of her tractor on her family's home farm in central Illinois. The attached planter can sow 48 rows of corn, covering an 80-foot swath of field at one time. (Véronique LaCapra/IPR)

Every morning at about 4:15 it sends her a text message, listing all her family’s farms, and how much rain each one got in the past 24 hours ― down to hundredths of an inch.

Using the desktop interface, Finfrock can pull up a Google satellite image of her family’s fields, and click through to even more weather information, including hourly predictions of their fields' "workability" based on rainfall, along with temperature and wind speed. She can also access historical temperature and rainfall data for their farms, going back several decades.

But Climate Corporation ― the San Francisco-based company that developed Climate Basic ― has a much loftier goal: “to help all the world’s people and businesses adapt to climate change.”

Tristan D’Orgeval, the company’s Director of Product Management, said giving farmers accurate weather information takes huge amounts of data from many different sources, including radar, rain gauges, and satellites. “We are dealing every day with more than 10 million points for precipitation, updated on an hourly basis.”

This year, the company launched a paid version of its service, called Climate Pro. Right now, it’s only available to corn farmers in nine Midwestern states, including Illinois and northern Missouri. For $15 an acre, farmers can get computer-generated advice about all aspects of their operations: what to plant, when to apply fertilizers and pesticides, and even how much money they can expect to make from their crop.

But Tristan D'Orgeval said the computer models are only as good as the data that people put into them. To work, they need detailed information about each farm ― like soil test results, or how much corn a given field is producing ― things only a farmer would know.

Monsanto seems to believe the service can live up to its promises ― and that farmers will think so, too. Last fall, the biotech seed giant acquired Climate Corporation for close to a billion dollars. Monsanto said farmers are already using Climate Pro on more than a million acres. 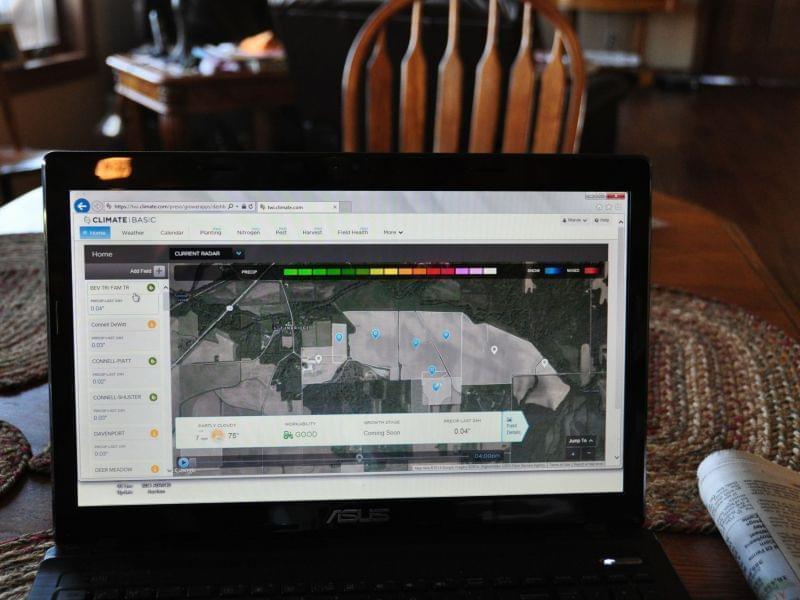 Climate Basic gives users like Shelley Finfrock a Google satellite view of their fields, with rainfall estimates for each listed on the left side of the screen. (Véronique LaCapra/IPR)

State extension agents, crop consultants, and retailers like Eric Gordon have been doing it for a long time. Gordon works for Brandt Consolidated, a company that sells seeds and agricultural chemicals, and applies them for farmers.

“I'm on the phone with several of my farmers two and three times a day during the planting season," Gordon said. "It's a people business."

Gordon said some of his older colleagues don’t like all the new “big data” services. They worry technology will make human crop advisors obsolete. But Eric doesn’t think so. "I don’t see it as a replacement," Gordon said. "I see it as a tool to make us better, more efficient."

Not every farmer is on board with the idea of sharing their data with major agribusiness companies.

Greg Guenther collects yield data from his combine, transfers it from a memory card and then stores it on his laptop computer. He works with several outside specialists to help him make decisions about his crops, but Guenther has no interest in letting that information move into the cloud.

"The biggest issue for me is the privacy issue," he said. "Once it’s off my computer who knows who’s going to get that data?"

The Finfrocks already buy Monsanto's genetically engineered seeds. And Shelley Finfrock has agreed to test the company's climate-based services. But she is still wary of how much data she should really share.

"Because of competition," Finfrock said. "And because of..." Finfrock pauses. "Having big brother watching. I don't know how else to put it."

Monsanto, for its part, has said none of the farmers’ data will be shared with third parties or even other areas of the company. 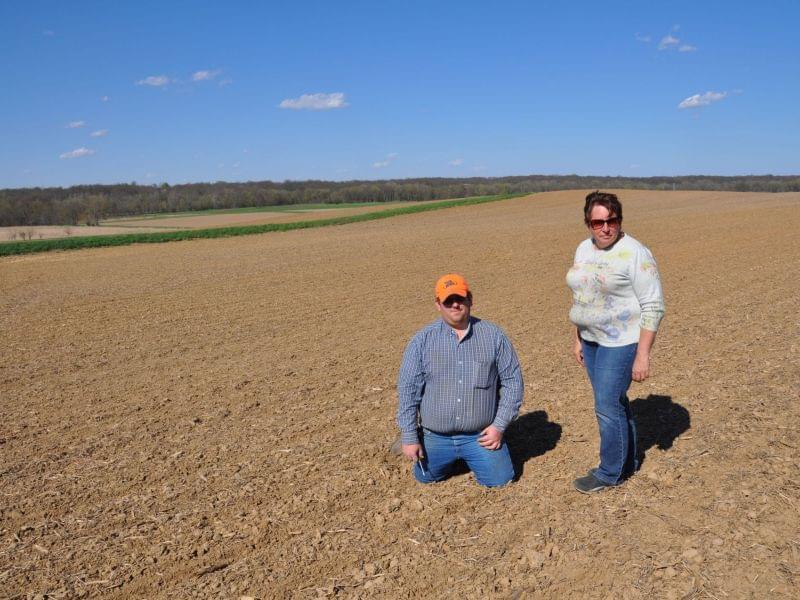 Osborne said farmers own their data and can delete it at any time. He said Monsanto has spearheaded the effort to create the Open Ag Alliance, a consortium of several companies to come up with a set of standards around big data. That alliance does not include John Deere or DuPont, however; two companies collaborating on data services that compete with Monsanto.

The American Farm Bureau Federation is trying to fill that void. At a meeting last month farm bureau officials met with Monsanto, DuPont, John Deere and other major players in big data.

3) Does all that information give big agro an unfair advantage?

Mary Kay Thatcher, senior director of congressional relations for the bureau, said among concerns about individual farmers’ privacy, they also want to make sure all that aggregated crop data can’t be used to influence markets.

"If you think about a big company that is getting data off a combine say in Iowa in corn production and they’ve got 1,000 combines going across the fields, if it’s going immediately to the cloud, that company going to have a lot of information about what the yield is looking like," Thatcher said. "They’re going to have a jump on the marketplace. If they wanted to manipulate the market they could."

Thatcher said the Farm Bureau wants to make sure safeguards are in place to prevent that from happening. As far as standards, she said they likely have about a year to get something in place.

"This technology is going to catch on, I think, very rapidly," she said.