Longtime Champaign-Urbana resident Aaron Ammons has been known as a critic of local law enforcement and its treatment of African-Americans, but others are now learning from him.

Friends say Aaron is someone who has drawn on his talents and experiences to enrich the lives of others.

Ammons, who was a standout basketball player at Champaign Central High School and Parkland College, recently took sides with his sister, Unique, during an NBA playoff game in late May at his Urbana home. Aaron had a few issues with the officiating during a contest between the Miami Heat and Indiana Pacers.

“They didn’t give him a technical (foul)?” he exclaimed, in the final minutes of what at one point had been a close contest. “That deserved a technical. That’s the kind of stuff that might turn the game around.”

Aaron chose to root for the underdog, instead of the favored Heat, who won the game, the series, and the NBA Finals.

“He wants to be an adversary all the time,” said Unique, who was cheering on the Heat and their star, LeBron James. “But when it came to me, tips and going to the gym, making sure I shot free throws the right way, three pointers the right way, that was him.”

Ammons’ support for the efforts of others can be seen throughout much of the year at the University of Illinois’ Krannert Art Museum. He emcees the SPEAK Café (Song, Poetry, Expression, Art, and Knowledge), a series of open-mic events for young African-Americans.

One night in March, Coco Harmon (pictured) reads some of her work, including a poem in honor of her mother. 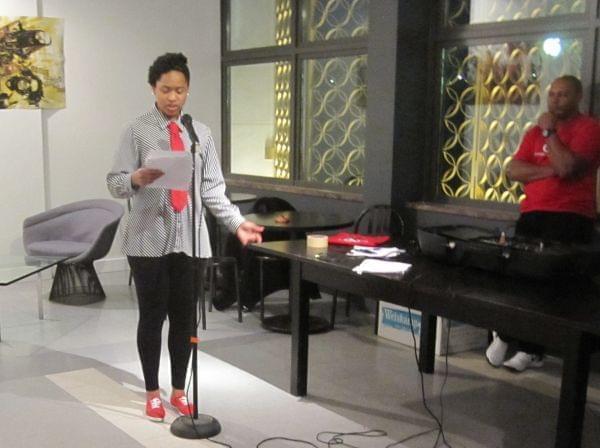 Here is a passage from Coco's poem:

“I was the seed and your tears were my rain,

causing me to grow into this beautiful flower.

And I thank you daily for your love shower.

Thank you for sincerely loving me,

and inside of me will long live my mother’s, your mother’s, their mother’s, a mother’s legacy.”

“(Did) you all like that?” said Ammons, coaxing a second round of applause for Harmon’s work.

Coco has known Aaron for about seven years, reading her work at the SPEAK Café (the audience is pictured below).

“Because I was a writer, but I wasn’t as confident,” she said. “He helped with the confidence a lot through different projects that he led.” 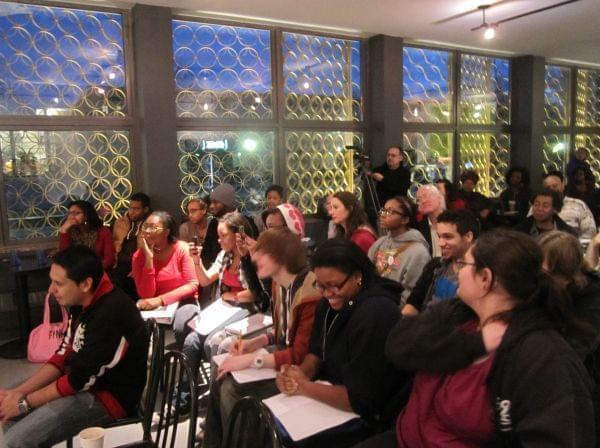 Aaron does what he can to welcome new poets to the mic.

“I want us to really embrace why a space like this is so important,” he told the audience. “It’s not always about finding the next new talent, or who has these super great skills. It’s about the content that’s being shared.”

Ammons has drawn from his darkest days for some of his poetry.  “Do I Remember” recalls a time when he was first dealing, then using drugs:

“Across the street from the preacher, I sneak a peek at the truth.

But I’m caught up in the game selling hell to the youth,

I had to get paid, and this was my means.

that I’ll regret before it’s over though….”

University of Illinois African-American Studies Professor Will Patterson recruited Ammons for the SPEAK Café after hosting it himself the first two years.

Patterson said he hopes to see SPEAK Cafe move from being solely a U of I event, and taken ‘on the road’ to other parts of the community.

“He has really made good strides in his life since he has last had any infractions with the law,” said Rev. Zernial Bogan, who’s known the Ammons family for 40 years, treating them as his own extended family.  “We’ve both come through some hard times with addiction and drugs that we’re not proud of, but it was part of our lives. And we were able to overcome those things. I look at him as a person who is still endeavoring to do that – to continue to put into the community without being selfish – and being selfless. And that’s something that you just don’t find very often.”

Coming to Champaign-Urbana as a young teen, Ammons said he was a popular student and standout athlete, but he was not focused on a career.

“Because I was never fully committed to the academic aspect of college,” he said. “I did not understand what college was really about – and what it meant to my future. So I eventually failed, and succumbed to the allure of street life.”

Ammons mother Valerie (pictured with her husband, Jerry) was in denial when hearing rumors on the street about her son.

“When they told me he was doing (drugs), I was like, no, you’re lying,” she said.  “I was neurotic I guess, because I was always thinking – he’s going to get killed, he’s going to jail, and that couldn’t be my baby doing that.” 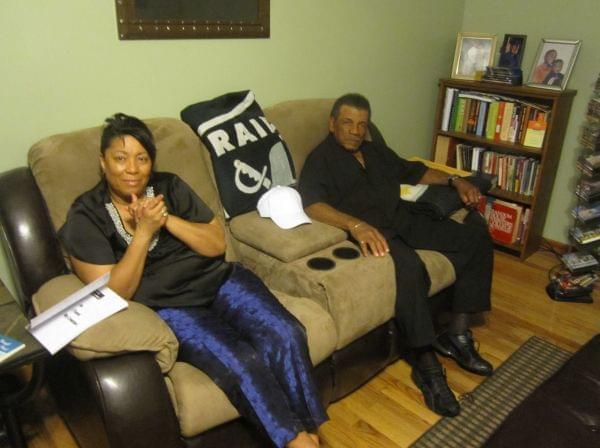 Aaron said he was arrested, and did a few weeks in the Champaign County Jail awaiting trial. However, he was only sentenced to probation.

It is hard to say where Aaron would have eventually ended up had he not found a job at the Chanute Transition Center – a now-closed Rantoul facility for troubled youth, not unlike the National Guard-administered Lincoln’s Challenge Academy.

That is where he met Carol, now his wife and mother to their three kids.

“He had the patience and the amount of discipline that (Transition Center youth) needed to help them see a different path,” she said.

Carol is Muslim, and grew up in a Chicago-area home with no drugs or alcohol. She got Aaron to kick his remaining addictions. She said they shared an interest in public service, and giving back to the community.

“His potential was greater than what he was doing,” she said. “And I could see his potential. He was always an excellent writer, he could speak well, and he didn’t capitalize on the natural gifts and talents that he had.”

After they were together for a while, Carol found Aaron’s poetry stashed under his bed. She convinced him to publish his work.

“I think that reading is one thing, but hearing him perform his poems is really the best way,” said former University of Illinois Press Art Director Cope Cumpston, who published the first two books. “They come from him, and he performs when he reads these poems.”

“People that he knew in that lifestyle that he had come from began to write him, and say how much the book inspired them to do something else,” she said. “I think he got it at that point.”

Carol’s interest in politics and Aaron’s own brushes with the law led them both to Champaign-Urbana Citizens for Peace and Justice. Aaron and Carol are co-founders of the group, which is dedicated to addressing racial and class inequities in the communities.

From there, their involvement in local politics has taken different paths.

Carol Ammons is an elected official, currently serving on the Urbana City Council.

Aaron Ammons can often be seen addressing the same elected bodies that his wife serves on --- on issues that include the use of tasers by police, proposals for county jail expansion and the 2009 Champaign Police shooting of teenager, Kiwane Carrington.

"When fans at the baseball park scream at the umpire that he’s not blind, they’re not really going to change his point of view,” Bruno said.  “And so in that respect, I appreciate what he’s doing.  I actually like Aaron a lot on a personal level.”

Ammons works as a building service worker for the University of Illinois, work he takes pride in doing. He is also taking some online classes at Eastern Illinois University, one step towards his ultimate goal of becoming a lawyer.

“He had some trails in life that kind of made him sit and think about things,” said Jerry Ammons, Aaron’s father. “And with his mother and I both talking to him, I think he just kind of came to grips with reality, so to speak – ‘I have to do something with my life – and this is the route – this is what he chose.”

At age 42, Ammons has not set a deadline for getting a law degree and passing the bar exam. But he said it would a ‘dream come true’ to just once step into a courtroom and defend a client. 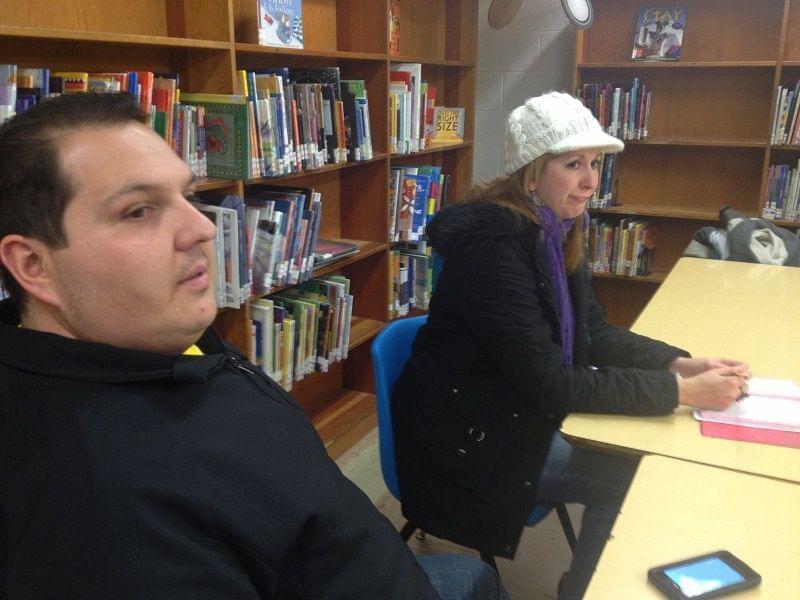 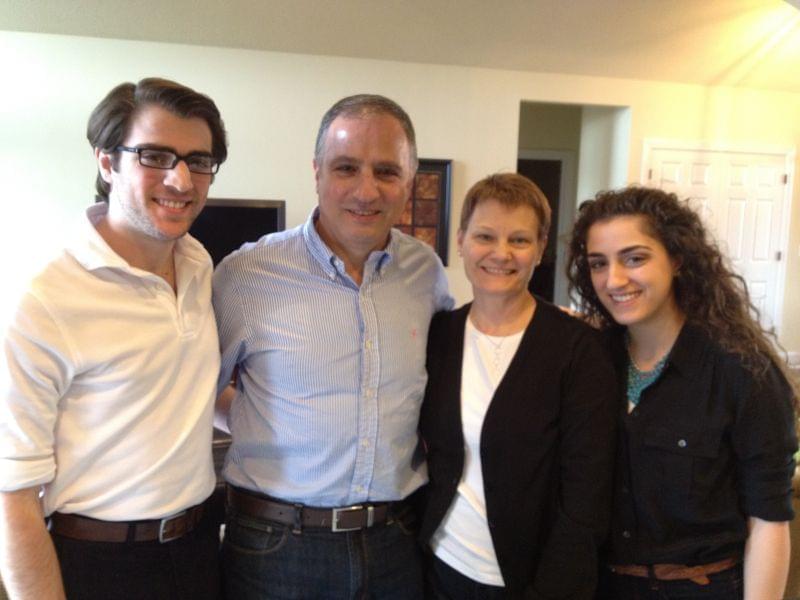