Toward the end of his life, President Richard Nixon found some redemption by secretly advising President Bill Clinton on foreign issues.

New declassified documents, on display at the Nixon Library, released by the Clinton Library and obtained by the Associated Press, show that Nixon sent Clinton a letter after he won the presidency.

"The strongest steel must pass through the hottest fire," Nixon wrote, according to the AP. "In enduring that ordeal you have demonstrated that you have the character to lead not just America but the forces of peace and freedom in the world."

Along with the letter, the museum will display a video of Clinton talking about his relationship with Nixon, who provided him with advice on Russia.

"I sought guidance in the example of President Nixon, who came to the presidency at a time in our history when Americans were tempted to say, 'We've had enough of the world,'" Clinton said in the video. "But President Nixon knew we had to continue to reach out to old friends and to old enemies alike. He knew America could not quit the world."

"It's a very fascinating letter because he's opening up the door to the new incoming president that I'm on your side, that I am impressed by you, that you have the moxy, you have the steel to be president and I'm here," Brinkley told CBS. "What's interesting was how Nixon was able to start rehabilitating himself and had been shunned largely by Reagan and Bush and was welcoming an overture with the new Democratic president. And Clinton took it."

We've called the Nixon library to try to obtain a copy of the letter. We'll update this post once we've gotten it. 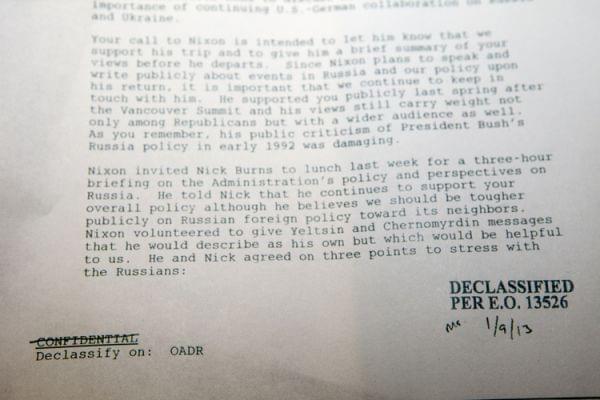 In this Tuesday, Feb.12, 2013 photo, a confidential National Security Council memo from a senior President Bill Clinton aide who spent three hours with former President Richard Nixon, shortly before the former president would make his 10th, and final, trip to Russia.

These documents give a little more texture to the relationship R.W. Apple Jr. wrote about in a must-read 1994 piece in The New York Times.

As he explained, the two "hardly seemed made for each other."

But after Nixon's death, Clinton was generous in his embrace of Nixon, saying that he managed "to leave his mark on his times as few figures have done in our history." Apple wrote: