With the new year comes new changes to the way Illinois restaurants are graded after food safety inspections. Instead of receiving a numerical score, all food establishments will being assigned a color: red, yellow, or green.

Previously, restaurants were given a score based on how many violations to the food safety code inspectors found, said Jim Roberts, director of environmental health at the Champaign-Urbana Public Health District.

But sometimes high scores could hide serious violations, he said.

In addition, food establishments would often focus on the number instead of seeking to understand how they got their score and what changes they need to make to protect consumers.

And scoring systems varied across the state, “so there was lack of uniformity for the consumer,” Roberts said.

“People found over time that scores lacked predictive value of predicting whether this place may result in a food-borne illness or not,” Roberts said. A low score didn’t necessarily correlate with a greater public health risk, or vice versa.

The new grading system adopts a model code from the FDA that has been recommended since the mid-90s and is now finally getting adopted in full across the state.

Roberts said the colors better inform consumers about the risk of food-borne illness from dining there. And inspectors will focus on making both short-term and long-term corrections to problems that are identified during the inspection process.

In Champaign-Urbana, food establishments are already required to post the colored placards in their front window, since the public health district already passed an ordinance requiring it. But each jurisdiction across the state sets its own rules regarding the posting of the information.

Find a link to the database for all food establishments in Champaign county at the Champaign-Urbana Public Health District website. 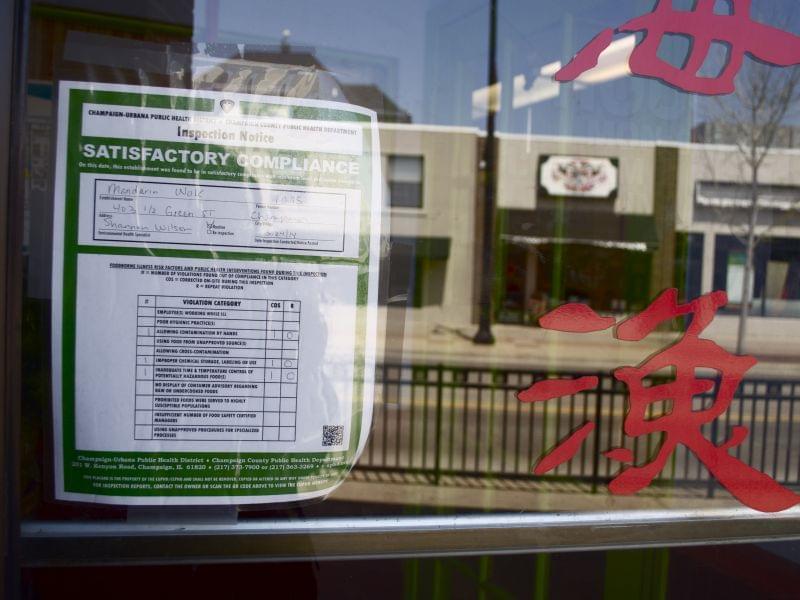