US President Barack Obama has praised Nelson Mandela as "an inspiration to the world" while visiting South Africa.

The US leader, who was speaking in Pretoria after talks with President Jacob Zuma, does not intend to visit the 94-year-old, who has been critically ill for nearly a week.

But he met the Mandela family in private and spoke by telephone to his wife, Graca Machel.

The American leader is speaking to students on the Soweto campus of the University of Johannesburg,

According to Mr Zuma, Mr Mandela remains "stable but critical", and he added that he had "every hope that he will be out of hospital soon".

However, South Africa's last apartheid president and the man jointly awarded the 1993 Nobel Peace Prize with Mr Mandela, FW de Klerk, is to cut short a visit to Europe due to Mr Mandela's poor health, his foundation said in a statement. 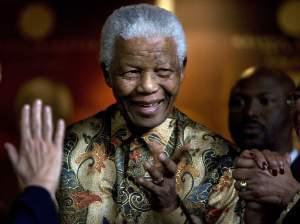 In Pretoria, Mr Obama said Mr Mandela's example of "the power of principle, of people standing up for what's right continues to shine as a beacon".

"The outpouring of love that we've seen in recent days shows that the triumph of Nelson Mandela and his nation speaks to something very deep in the human spirit; the yearning for justice and dignity that transcends boundaries of race and class and faith and country," he said.

He met members of the former leader's family at the Nelson Mandela Foundation in Johannesburg. The US First Lady, Michelle Obama, did not accompany him but spoke to Mrs Machel by phone along with her husband.

Mrs Machel, who remains by Mr Mandela's side in the hospital in Pretoria, said after their phone call that she had conveyed their "messages of strength and inspiration" to her husband.

Mr Zuma said that as the first black leaders of their respective countries, Mr Obama and Mr Mandela were "bound by history" and so "carry the dreams of millions of people in Africa and in the diaspora who were previously oppressed".

He said Mr Obama's visit was "well timed" to take advantage of a growing market in South Africa, and called for greater US investment.

When asked whether the US felt threatened by the increasing influence of other countries, particularly China, in Africa, Mr Obama said he believed it was a good thing for the development of the continent, but cautioned South Africa to ensure that foreign companies were employing local workers and investing back into the country.

Hours later, police fired rubber bullets and stun grenades to disperse protesters outside the Soweto campus of the University of Johannesburg, where a group had gathered to protest at the US leader's policies. At least one person was injured and one arrested.

Some protesters were carrying portraits of Mr Obama marked with a Hitler-style moustache.

"People died in Libya, people are still dying in Syria... in Afghanistan, in Pakistan, drones are still killing people. So that's why we are calling him a Hitler. He's a killer,'' Ramasimong Tsokolibane, 54, was quoted as saying by the Associated Press news agency.

Addressing students at the university, Mr Obama said he wanted to spread his "yes we can" message to "young African leaders".

During his weekend trip, the US president will visit Robben Island off Cape Town, where Mr Mandela was imprisoned for 18 years. On Monday, he will continue his African tour in Tanzania.

Mr Mandela is revered for leading the fight against white minority rule in South Africa and then preaching reconciliation despite being imprisoned for 27 years.

He was awarded the Nobel Peace Prize in 1993 and was elected president the following year. He left office in 1999 after a single term.

Mr Mandela retired from public life in 2004 and has rarely been seen at official events since.

He has a long history of lung problems, and was diagnosed with tuberculosis in the 1980s while he was a prisoner on Robben Island.

After his release, Mr Mandela said that the tuberculosis was probably caused by dampness in his prison cell.