Opt-in Text Alert Systems at Universities Leave Many Out

A review of major universities shows there are inconsistencies in how emergency alerts are sent out to students.

A Northern Illinois University lecture hall was the target of a mass shooting in 2008 where five people were killed and 18 injured before the shooter took his own life.

At the time of the shooting, Northern Illinois’ students had to voluntarily sign up for emergency text message alerts, which only reached up to 10 percent of the student body. 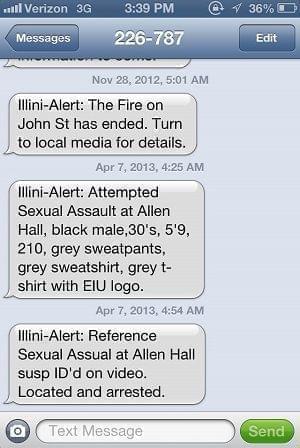 But the University of Illinois at Urbana-Champaign - where the Northern Illinois shooter, Steven Kazmierczak, lived and attended graduate school at the time of the shooting - has not changed its emergency alert system to reach more students via text messages. With its current opt-in system, less than one-third of Illinois’ roughly 42,000 students are signed up for text alerts, Illinois campus security officials say.

Lieutenant Todd Short of the University of Illinois Police Department at Champaign-Urbana said he believes Illinois’ system works well because its alerts go out in several ways.

“We don’t require people to register their cell phones in part because we use a multi-modal approach to reach our campus populace,” said Short, who oversees the alert system.

“Every student is sent an Illini Alert to their Illinois.edu email account regardless of whether they sign up for the text messaging service,” said Short. “We also post on campus web pages, as well as on our Facebook and Twitter sites whenever we disseminate an Illini Alert so we do not rely solely on text messaging.”

Yet an expert who has studied the way students communicate said text messaging is the most effective method.

“The best way to respond [to an emergency] is to have the most instantaneous message delivery on a college campus, and that by far is text messaging,” said Michael Hanley, an associate professor and the director of Ball State University’s Institute for Mobile Media Research.

Hanley has conducted research since 2005 on college students’ use of cell phones. According to his research, 81 percent of students use text messaging as their primary form of communication, while only 9 percent use email as their main mode of communication.

The new system requires that students “opt-out” of receiving automatic alerts to university email accounts and texts to those listing a mobile phone. It also allows for students to confirm they received the emergency text message.

“[The] Opt-out system was implemented with our change in provider, Fall 2013, in an effort to better serve the campus population,” Palian said in an email.

But a spot check of universities in the Midwest and around the nation found there is an inconsistent approach to issuing alerts.

There also are inconsistent methods in  keeping track of who  receives alerts and how they receive them. In Wisconsin, the university campuses do not break out the numbers by students, but include faculty, staff and students in percentages. So the campus number for UW-Platteville includes everyone on campus, while at other universities such as Northern Iowa there are specific numbers of participation for faculty, students and staff.

Under the University of Illinois opt-in system students must voluntarily sign up to receive text message notifications of emergencies. Those emergencies could range from a bad weather warning to a shooter in a university building.

To combat the kind of low percentage that Illinois has, a national law enforcement official recommends, like Hanley, a system that requires opting-out.

“Generally, any system that automatically puts everyone on a campus in a database is better, and then you have to opt-out,” said Anne Glavin, the president of the International Association of Campus Law Enforcement Administrators. Glavin also is chief of police at California State University at Northridge.

The problem with the opt-in system, Hanley of Ball State said, is that the universities send alerts through formal channels of communication, rather than informal channels such as text messages, which are more likely to reach students.

“Students use e-mail for classwork, not for personal communication,” he said.

Although mandatory text alerts are ideal, they may not always work, Glavin cautioned. In some cases, they may be slow and take longer than an email to get to a student.

But the answer to that, Glavin said, is to incorporate part of Illinois’s approach to emphasize redundant systems, where alerts are sent out over multiple platforms.

The University of Illinois is currently exploring the possibility of switching to an opt-out system, said Robin Kaler, spokesperson for the university.

“For the first several years we had the system, most people had to pay for each text they received, and people often avoided registering to avoid those fees. Now, it’s more common for people to have unlimited texting, so that concern is diminished,” she said.

Max Ellithorpe, a graduate student member of the Illinois Student Senate who sits on the Public Safety Advisory Committee, believes the University’s lack of success at getting students to sign up for text alerts stems from apathy among students.

“I think that safety hasn't always ranked high on students' lists of priorities,” Ellithorpe said. “Sometimes there is a feeling of invincibility that it won't happen to me."

Additional reporting by Kim Gleeson of the University of Illinois Urbana-Champaign and Rory Linnane of the Wisconsin Center for Investigative Journalism.