Listen
The “who” part of the Farm Bill is pretty clear. With trillions dollars of government spending up for grabs, lobbyists from all ends of the spectrum – representing environmental interests, biotech companies, food companies, farmers – flocked to Capitol Hill to find their piece of the Farm Bill pie.

But thanks to opaque lobbying disclosure laws, it’s nearly impossible to know how much power each group wields and what they were ultimately able to accomplish.

Our research supports that. After a months-long investigation, Harvest Public Media and the Midwest Center for Investigative Reporting found that in all, at least 600 groups lobbied on the Farm Bill and associated issues during the drafting process, between 2012 and the first part of 2014.

But although groups are required to disclose how much they spent lobbying Congress in quarterly reports, they are not required to break down the details — such as how much time, effort and expense they devoted to working on a specific issue.

Consumer watchdog group Food and Water Watch attempted to analyze the lobbying spending during the drafting of the previous Farm Bill, enacted in 2008. Patrick Woodall, Food and Water Watch’s research director, says the fact that Farm Bills include so many different kinds of programs can complicate the process.

“I’ve been doing money in politics research for a long time and I have to say that the Farm Bill lobbying is the most difficult of any that I have done,” Woodall said. “Because the legislation itself is so sprawling, the number of interests is so many, and they are lobbying on so many different things.”

The bill that ultimately became the Farm Bill, the Agricultural Act of 2014, ended up at almost 400 pages of arcane rules and dizzying legislative language. It includes everything from funding for the Supplemental Nutrition Assistance Program, commonly known as food stamps, to grants for NOAA weather transmitters, to the rules of the crop insurance program. It created a new support program for dairy producers and it lays out conservation requirements for farmers.

Statutes in the Farm Bill will ultimately affect the price of staple crops like corn, soybeans and wheat, and will change how much profit both farmers and food companies will make.

“It’s a huge, enormous bill, so studying it is incredibly difficult,” Woodall said. “Attributing issues related to interest and why people are lobbying on it can be very complicated because, obviously, people lobby on different parts of it and they might lobby on multiple parts of it. In many cases it’s not exactly clear what the interest is that they have behind the legislation.”

The U.S. Chamber of Commerce, for instance, which represents the interests of millions of U.S. businesses, said it lobbied on Farm Bill issues during seven of the nine quarters examined by Harvest Public Media and the Midwest Center for Investigative Reporting.

In one of its reports, the group said that it spent more than $20 million lobbying the Farm Bill – and a bill that would strip federal support for sugar growers and legislation authorizing the Transportation Security Administration and a bill initially passed in 1900 designed to give game wardens jurisdiction over state hunting grounds.

How much of that $20 million was spent trying to influence the farm bill? The U.S. Chamber of Commerce is not required to say.

The battle waged on the 2014 Farm Bill stretched on for years. Our examination of lobbying disclosure data shows the combatants, but not the ammunition or the strategy.

The EWG’s chief lobbyist, Scott Faber, vice president for government affairs, often finds himself up against lobbyists representing large commodity organizations. It’s a particularly aggressive battle because the majority of the Farm Bill budget goes to pay for the food stamps program, leaving a shrinking slice for the section of the bill dealing most directly with farmers.

“It’s always a bitter fight,” Faber said. “All of the major commodity groups – the groups that represent the farmers who get most of the spoils – are always fighting to keep their share of the pie.”

It is Faber’s job, of course, to keep and expand the section of the pie devoted to conservation measures and to rewarding farmers that use practices EWG promotes.

The 2014 Farm Bill eliminated a long-running government farm subsidy known as direct payments with little fanfare. But behind closed doors, lobbyists and legislators engaged in furious negotiations on a replacement farm safety net.

“The fighting, the scraping, the elbowing was more intense this time because there was a pitched battle to divide up the spoils from ending direct payments,” Faber said.

An army of lobbyists were part of the brawl.

Unclear lobbying disclosure plagues all kinds of lawmaking. But charting influence on the sprawling legislation of the Farm Bill that is both wide-ranging in its purview and universal in its effects, is particularly important.

“This is major legislation,” Woodall said. “It has huge effects – it’s a kitchen table issue. This is the food that American families put on their tables every day. It comes out of a broader agricultural policy.”

Ultimately, corporations and outside groups that lobbied on the Farm Bill reported spending at least $534,251,362 lobbying during the two year span we examined. Because that number is tied up with other concerns, we’ll never know just how expensive the Farm Bill fight was.

For now, lawmakers in Washington are mostly concentrating on the implementation of the 2014 Farm Bill. But in just two or three years, expect the examination of agricultural policy to begin anew. And the lobbying. 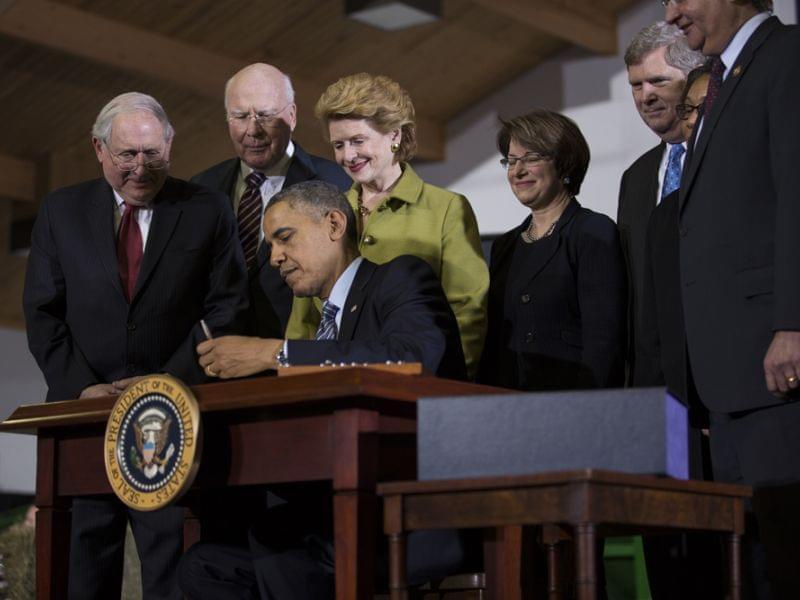 Growing Influence: Lobbyists Of All Kinds Flock To Farm Bill