Parkland College is looking to ramp up the Institute of Aviation at Willard Airport at a key moment for the industry.  Regional airlines are suffering as part of what one expert calls a shift in the industry.

Charley Kline has flown for over 25 years - more than half his life.  He earned his commercial pilot license at the Institute of Aviation last year, but he’s never considered flying as a career - until now.

After retiring last summer from an IT position with the university, Kline wanted something else to do.

He said it makes the most sense now to earn his flight instructor certificate through Parkland, at a time when the Institute is looking to fill a growing demand for airline pilots.

“I think it’s a fortunate coincidence that they’re trying to ramp up their flight instruction just at the same time as I’m – at this point – in my learning, become a fight instructor myself,” he said. 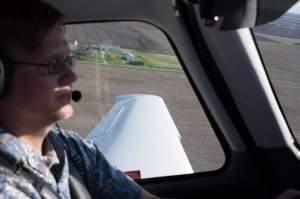 (pictured: Charley Kline takes off from Willard Airport in April 2014, just over farmland on along Duncan Road. Photo courtesy of Charley Kline.)

The University of Illinois’ Board of Trustees voted to close the flight school in 2011.  After that vote, the program allowed only current students to complete courses, so Kline was among the last in the program at the U of I.

Two years later, Parkland College Trustees voted to take on the program.  It just completed its first academic year with the community college.

“I think it was a slow progression of getting more and more comfortable with what it took to operate an institute,” said Parkland President Tom Ramage. He said it took a few pitches from U of I administration to convince his school to take on the program.

It’s a 3-year agreement, with Parkland leasing the facilities at Willard, including the plane fleet, for a dolllar a year. The U of I also transferred $3-million in leftover marketing funds.  Ramage said that’s essential – since many interested in flight school were only aware of the U of I’s decision to cut the program:

“The story had been out in the world that the Institute for Aviation had closed,” he said.  “The 200 or so students that had been part of the U of I’s version of the institute ended.  And we had to basically recruit a whole new group of students, and there’s obviously a lag time in there.”

Institute of Aviation Director and Chief Pilot Sybil Phillips said about 40 Parkland students have gone through the program in its first year under Parkland.  A figure, she said needs to more than triple in three years for the program to be sustainable.

To do that, Parkland has been hitting college fairs in the Chicago area, where the bulk of the U of I’s aviation students came from.  Phillips said the institute wants to train more pilots for small airlines at a time when regional companies like Envoy, and Allegiant Air are looking for new pilots.

“Some of the regional airlines are having to park airplanes, because they simply can’t staff them,” she said.  “Their training departments are backed up, and this is happening because the major airlines are now starting to hire pilots.”

Phillips, who’s been with the Institute 28 years, also said the military is not training as many pilots as it used to, further decimating the regional airlines.  She noted that with the mandatory retirement age of 65 for pilots (passed by Congress in 2013, extended from age 60) at least one major airline will have to hire about 500 pilots a year.

“Every day I hear about people, graduates from our program, who are now moving on the major airlines, and that’s great,” she said.  “Problem is, there’s not enough pilots coming up in the ranks to occupy those positions in the regional airlines.  So what we may see – not just at Champaign, but all over the country, when you go to a smaller airport, you may find that your flight gets cancelled.”

The real harm that’s been done is that the continuity of student flow into this program was really hit,” said Institute Instructor Don Telleur, who’s been there for 23 years.  “Our goal is to overcome that, and build that student base back up, so that we can be sustainable and help be a part of solving the global shortage of qualified pilots.” 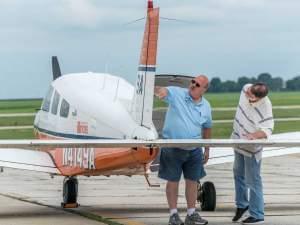 Mike McGee is a research fellow at the RAND Corporation, a federally-funded public policy think tank.  He said there isn’t a pilot shortage, but he does see a shift in the industry.

In the last decade, he said major airlines weren’t hiring much after the 9-11 attacks, mergers, bankruptcies, and the economic downtown.  But McGee says now, there’s movement in the pipeline.

“A lot of pilots are now leaving," he said.  "Captains are now leaving the regionals to go the majors.  And so those regionals now have to backfill, and they are all competing to try and get the best and the brightest of this pool of younger pilots who are going through the system.”

McGee says Congress passed what’s called the ’15-hundred hour rule’ in 2013 – named for the number of hours of training required for pilots as well as co-pilots.  He says with tougher training requirements in place, flight schools like the one offered by Parkland will be essential.

“I think that post-this rule, you are going to see an increase over time – applicants and students – in both the 2-hour and the 4-hour programs that have flight schools.  That will become the main route of civilian pilot production for those that want to be professional pilots in the future.”

Future pilots like Ed Tirpack.  He’s a student at the U of I, majoring in physics.  But he’s taken two years of flight courses at the Institute of Aviation, and earned his commercial pilot’s license.

“I came from a private flight school before I came (to the Institute),”  It’s a lot more academically challenging, so I’m learning a lot more.”

Ideally, Tirpack would like to get a research job at NASA.  But the 20-year likes the sound of the term ‘airline pilot’ as a backup plan.  “It was always an interest.  I always loved thinking about how flight is possible I guess… that’s the inner-physicist in me.  And it’s just such an amazing experience to do it.”

It’s that kind of attitude that Parkland instructors hope resonates with others.   College President Tom Ramage said they’ll spend the next couple of months recruiting people who want to learn to fly.

“The University’s version of the institute – at their peak – they were close to 300 students,” he said.  “Most of those, again, from the state of Illinois.  There’s no reason why Parkland can’t get as least close to that number.”

Parkland needs those students - and their tuition dollars – to keep the program running beyond Parkland’s 3-year agreement with the university.

They also need a steady stream of new pilots to feed the growing demand from the airline industry.  Summer aviation courses through the community college started this week.

Parkland College Could Take Over UI Institute Of Aviation