University of Illinois officials did not approve a $400,000 bonus for outgoing Chancellor Phyllis Wise Wednesday afternoon. The vote was unanimous to deny the money after Wise resigned abruptly last week.

The bonus was supposed to be the prorated portion of a promised $500,000 "retention bonus" included in the chancellor's contract. But board of trustees members voted to deny that money, as well as make Wise ineligible for a year of paid sabbatical.

U of I president Tim Killeen says that's not the path he saw taking at first; The chancellor and her legal team had negotiated that $400,000 sum with the University.

"I had hoped to handle Chancellor Wise's exit in the spirit in which her original contract was conferred," he told reporters. "But the board, with a lot of discussion and a lot of analysis, has mandated a different path, which I fully respect."

The day after Wise made her announcement last week, the U of I released hundreds of emails previously hidden from public view. Those messages were sent using personal, rather than University email accounts, and reveal that Wise had encouraged the use of private accounts to get around freedom of information law.

U of I officials faced mounting pressure to not approve Wise's exit package, both from the chancellor's critics and from the board's "ex officio" member, Governor Bruce Rauner.

When asked if the governor's input made a difference, Board chair Ed McMillan says would've voted "no" either way.

"Every one of the board members weighed in on the issue, obviously the governor's perspective had been sent in writing," he said. "So the decision that was reached today was after having full input from all trustees."

The board's decision also triggers dismissal proceedings against Wise for her administrative role, though she'll still be welcome to a place on faculty.

Barb Wilson will take over as the interim chancellor while officials search for a permanent replacement for Wise, who'd served in that position since Oct. 2011.

Wilson steps into a difficult time for the campus after a year of lawsuits, including the case of controversial professor Steven Salaita, whose job offer was rescinded last summer, and allegations of abuse and racism in three sports programs.

Wilson says while her job is temporary, she doesn't plan on being a figurehead or passthrough for U of I President Tim Killeen.

"I wouldn't be accepting this position if I were just doing it so that he could make decisions," she said. "If anybody knows me I'm not a quiet person and I don't sit back and let other people make decisions."

Wilson will earn $397,500 per year in her dual role as interim chancellor and dean of the College of Liberal Arts and Sciences. Her background in communications studies is a stark contrast to Wise's background in hard research science. Wise was criticized last fall amidst the Steven Salaita affair for being too entrenched in the sciences and ignoring liberal arts, where Salaita was supposed to have taught.

Wilson was not promised a "retention bonus" like Wise's. Killeen says going forward, the U of I will not offer such bonuses, but rather merit-based ones. 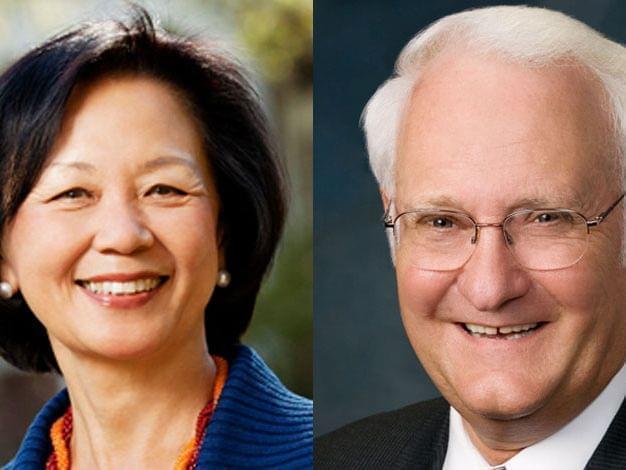