Republican Illinois State Sen. Jim Oberweis is his party’s pick to run for the U.S. Senate in November, but he will have a tough race against incumbent Democrat Dick Durbin.

He said he is willing to spend more to beat Durbin in November, "to eliminate a guy who has compared out military to the Nazis. A guy who’s been in Washington for 32 years, which is way too long."

Durbin, meanwhile, put a different spin on being labeled a “career politician.” He said the feds’ recently chose Illinois to be home to a new digital manufacturing hub.

"My experience in the Senate helped," Durbin added. "I hope they realize that that experience might help again - bring even more jobs.

Durbin won his last general election by a landslide - and already has more than $5.5 million saved for this one.

Cross is from Oswego. He has been a member of the General Assembly since 1993, and spent a decade in the House leadership post. He highlighted his legislative experience on the campaign trail.

Grogan is an accountant who has worked as an auditor for DuPage County since 2008. The Downers Grove resident said he had the financial expertise best serve in the role.

The seat is being vacated by current treasurer Dan Rutherford, who made a GOP primary bid for governor.

Cross will take on Democratic state Sen. Michael Frerichs of Champaign in the November general election.

There was enthusiasm at the victory party - but Quinn didn’t run much of a primary campaign before that. His only opponent was a long-shot - Tio Hardiman, a Chicago anti-violence activist.

Quinn struck a populist note in his victory speech - talking up his push for a $10 hourly minimum wage.

"And I’m here today to fight for an economy that works for everyone," he said. "Not just for the billionaires, but for everyone."

The billionaire in question is Republican nominee Bruce Rauner - a wealthy investor. Quinn is already seeking to portray Rauner as being out-of-touch.

"I believe in everyday people," Quinn said. "I think a governor has to have a heart. I may not have nine mansions. I have one house."

Quinn’s general election kickoff did NOT mention the controversial pension law he signed - which has drawn the ire of public worker unions.

"He’s driven up unemployment," Rauner said. "He’s risen our taxes more than 60 percent. He’s jacked up our real estate taxes while our home values were going down. He’s shredded our social services safety net. And he’s de-funded our schools while thousands of schoolchildren are trapped in failing schools. He’s a failure. We’re going to get him gone this November."

Rauner won with about 40 percent of Republican support in the GOP primary for governor. He beat State Sen. Kirk Dillard by about 23-thousand votes. State Sen. Bill Brady finished without about 15 percent of the vote, and Treasurer Dan Rutherford (ROOTH-uh-ford) had about 8 percent.

She defeated Champaign Attorney Sam Rosenberg in the Democratic Primary. Speaking to supporters, Ammons said she plans to build support from now until the November election.

“People from all walks of life have contributed what they could to this campaign, and because of that we are stronger because of it," she said. "We are going all the way in November. We will be successful. We will be united. We will be working together.” 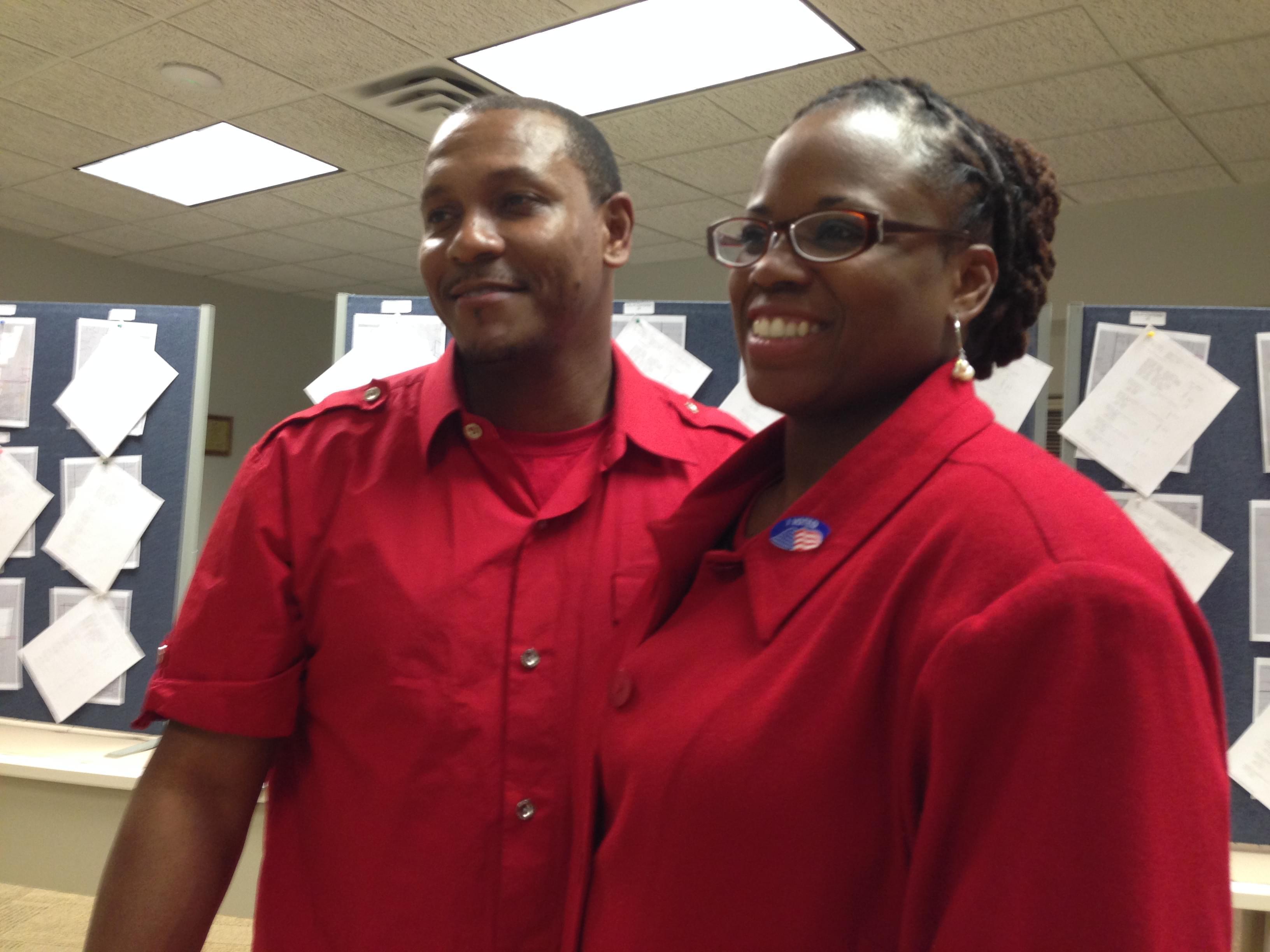 Carol Ammons with her husband, Aaron, on March 18, 2014 after learning she won the Democratic Primary for the 103rd House District. (Sean Powers/WILL)

In the General Election, Ammons faces Kristin Williamson of Urbana, who is vice-chair of the Champaign County Republican Party. Williamson said she does not think she will have trouble winning the race in a heavily Democratic district.

“To say that someone who’s not a Democrat cannot win this race is kind of back to the old game of partisanship," Williamson said. "What we’ve seen not only at our state government, but in our national government, is partisanship isn’t going to get us very far and finding solutions to the very real challenges that we’re dealing with today.”

Whoever wins the General Election replaces Urbana Democrat Naomi Jakobsson in the legislature. Jakobsson decided not to run for re-election.

The wealthy venture capitalist from Winnetka in November will face Democratic governor Pat Quinn, who had a lesser-known primary challenger.

Rauner ran on a promise to "shake up'' Springfield and the "career politicians'' and special interests he says helped create Illinois' financial problems.

The chair of the Champaign County Board lost his re-election bid to a former board chair. Pius Weibel defeated current Chair Al Kurtz by about 200 votes in the District 7 Democratic primary. Weibel said after a two year absence from the board, he’s ready to return.

He told supporters Tuesday in Bloomington that the race didn't end up as he'd hoped.

Brady says he wasn't ready to call anyone to congratulate them because the numbers were still close.

Brady won the GOP nomination in 2010, but lost the general election to Gov. Pat Quinn. Brady had said he was ready for another try and had built on support from the 2010 race.

Republican Congressman Rodney Davis of Taylorville clinched his party’s nomination, as he sets his sights on a second term in office.

Two years ago, Harold squared off against Davis as they both tried to replace former Congressman Tim Johnson on the ballot after Johnson announced plans to retire from politics. But Republican Party chairs instead chose Davis.

With Tuesday night’s loss, Harold said she doesn’t know what her political future might have in store for her, but she says she’s happy with the campaign she ran.

“I feel very good about the campaign that I was able to run," Harold explained. "I wanted to run a positive campaign that was focused on the issues, and that involved new people and engage them in the political process, and I feel that the team that I was blessed to work with was able to accomplish that. So, I have no regrets.”

Davis said he hopes Republicans across the 13th district can come together with the common goal of winning in November. He faces former Madison County judge Ann Callis in the General Election.

-Sean Powers and Jeff Bossert, WILL

A former prosecutor and Madison County judge has won a three-way Democratic primary for Congress in Illinois' 13th District.

Ann Callis won the nomination over George Gollin and David Green in the district that's in the south-central part of the state. Callis was backed by U.S. Sen. Dick Durbin, national Democratic organizations and former House Speaker Nancy Pelosi.

Gollin is a University of Illinois physics professor from Champaign. Green is a policy analyst from Champaign. Gollin had received the endorsement of several newspapers in the race but Callis far outspent him in television and radio advertising.

Green had fundraising trouble and was considered the underdog in the race.

According to The Associated Press, Gov. Pat Quinn has been declared winner with 79% of vote, 21% for Tio Hardiman.

Illinois Treasurer Dan Rutherford basically conceded his campaign for governor earlier tonight. His standing in the polls plummeted after a former employee filed a lawsuit accusing the treasurer of sexual harassment and coercing him to do political work. Rutherford said the past few weeks have been the most challenging in his life.

Rutherford said he is "not going away." He also urged the Republican Party to do a better job of reaching out to a more diverse group of voters.

At The Brookens Administrative Center in Urbana getting ready for WILL's Election Night coverage. Talking to Champaign County Clerk Gordy Hulten in a few minutes to discuss voter turnout. This is the first primary election in Illinois in which 17-year-olds can vote. We'll be tracking the race for Illinois' 103 House District between Urbana City Council member Caro Ammons and Champaign Attorney Sam Rosenberg, both Democrats. We will also be following the 13th District Congressional race. That contest has three Republican candidates and three Democratic candidates. The other major race we're paying close attention to tonight is the Republican Gubernatorial Primary.