Political campaigns are gearing up for next year's elections. So, too, are political pranksters.

Congressman Rodney Davis (R-Taylorville) has lately found himself being shadowed by a giant duck. Well, technically it is a woman in a duck suit.

"It is very warm in the duck costume," said Nafia Khan. 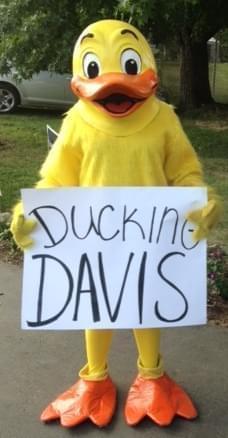 Khan and a handful of other activists were on the State Fairgrounds last week, holding signs that accuse Congressman Davis of "ducking" constituents. They say he is not holding any town hall meetings.

"(If) he wants to come back and report back to us what he's specifically doing in Congress, we'd love that, and we can engage with him further," Khan added.

The duck protesters are backed by the national Democratic Congressional organization.

Andrew Flach, a spokesman for Rep. Davis, dismissed it as "political funny season." Flach acknowledged there have not been town-hall meetings, but said Davis is still available.

"The charge that he's not available to discuss issues with constituents is completely unfair," Flach said. "He holds a lot of one-on-one and small-group meetings, he attends other public events, and we hold mobile office hour stops."

At a state Republican meeting in Springfield last week, Davis took the duck as a badge of honor.

"Who else brought protesters to this event today?" he said.

Davis is less than one year into his first term in Congress. He is facing a primary challenge from lawyer and former Miss America Erika Harold.