Report: Mandela Interpreter Was Once Charged With Murder

"The South African government said Friday it is aware of reports that the bogus sign language interpreter at Nelson Mandela's memorial once faced a murder charge, and said he is being investigated," The Associated Press reports from Johannesburg.

According to the wire service, "Phumla Williams of the government communications office said the government is investigating Thamsanqa Jantjie and how he was selected to interpret at a memorial Tuesday at which he stood close to U.S. President Barack Obama and other leaders."

"The sign language interpreter at Nelson Mandela's memorial on Tuesday faced a murder charge in 2003. It's unknown if the case was ever concluded as the court file is mysteriously empty. ...

"eNCA's investigations have found that Thamsanqa Jantjie, who is being treated for schizophrenia, has also faced rape (1994), theft (1995), housebreaking (1997), malicious damage to property (1998), murder, attempted murder and kidnapping (2003) charges.

"Many of the charges brought against him were dropped, allegedly because he was mentally unfit to stand trial.

"Jantjie was acquitted on the rape charge, but he was convicted of theft for which he was sentenced to three years in prison. It's unclear if he ever spent time in jail."

The AP adds that:

"Asked by an Associated Press reporter about a murder charge, Jantjie turned and walked away without commenting. ... Jantjie told AP on Thursday he has been violent in the past and hallucinated during the memorial service as he was gesturing incoherently. ...

"In Washington, Secret Service spokesman Ed Donovan said Thursday that vetting for criminal history and other appropriate background checks of the people onstage were the responsibility of the South Africans. He added that Secret Service agents are 'always in close proximity to the president.' ...

"U.S. Assistant Secretary of State for African Affairs Linda Thomas-Greenfield said 'we're all very upset' about the bogus interpreter, who appeared just three feet from Obama at the memorial ceremony."

Our original post — "South African Government Apologizes For Interpreter" — picks up the rest of today's developments:

A top official in South Africa's government on Friday offered the most direct apology so far for the sign language interpreter who appeared on stage with world leaders this week at a memorial service for Nelson Mandela.

"We sincerely apologize to the deaf community and to all South Africans for any offense that may have been suffered," Arts and Culture Minister Paul Mashatile said.

South Africa's News 24 adds that Mashatile also said, "we hope to speedily begin regulating the profession in early 2014 through the South African Language Practitioners' Council Bill, so that this kind of incident doesn't happen ever again."

In case you've not followed this story, during Tuesday's memorial service in Johannesburg complaints started to appear on Twitter from the deaf community in South Africa. The man who was standing next to President Obama and other world leaders, they said, was a fake. He wasn't signing, they said. He was making meaningless gestures.

Some in the deaf community had complained about the man previously, after he appeared at African National Congress events.

On Thursday the interpreter, Thamsanqa Jantjie, told news outlets that he suffered a schizophrenic episode while on stage. "There was nothing I could do. I was alone in a very dangerous situation," he told Johannesburg's The Star. "I tried to control myself and not show the world what was going on. I am very sorry, it's the situation I found myself in."

But as NBC News reports, Jantjie's explanation didn't account for why he'd been complained about in the past:

"A 'fake' sign language interpreter who claimed to suffer an on-stage schizophrenic episode during Nelson Mandela's memorial service failed to communicate a single word of a speech made by South African President Jacob Zuma more than a year ago.

"The Deaf Federation of South Africa alleged that '100 percent of the information was omitted' by Thamsanqa Jantjie after he appeared at an event in January 2012. In a letter of complaint obtained by NBC News on Friday, the group described Jantjie's interpreting for Zuma as 'a mockery' and claimed his gestures appeared 'self-invented.' " 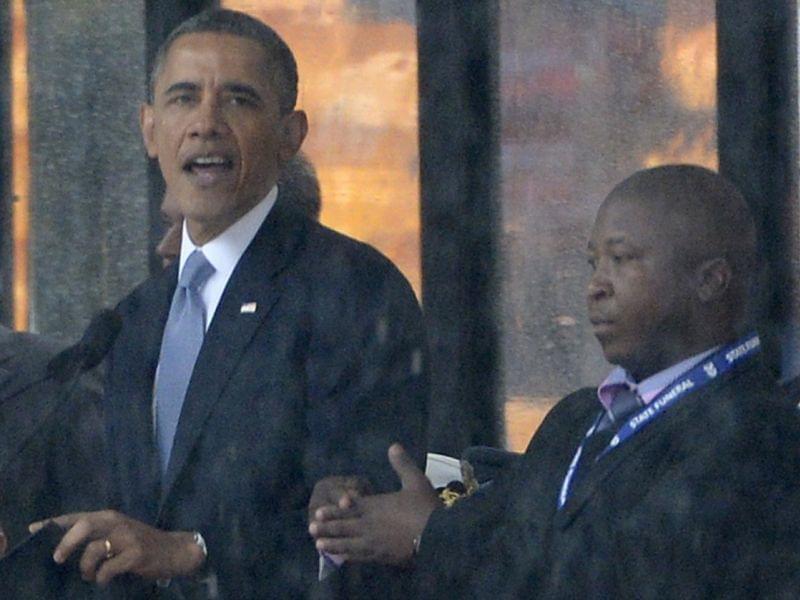