Democratic Illinois Gov. JB Pritzker, his wife and his brother-in-law are under federal criminal investigation for a dubious residential property tax appeal that dogged him during his gubernatorial campaign last year, WBEZ has learned.

A law-enforcement source familiar with the investigation confirmed to WBEZ that the probe, which has not been revealed publicly until now, began last October and remains active. There are no signs that criminal charges are imminent.

WBEZ has also confirmed that Illinois First Lady MK Pritzker’s personal assistant who was involved in the property tax appeal, Christine Lovely, is being represented by one of Chicago’s most high-powered lawyers. Her attorney, Reid Schar, is a former federal prosecutor who helped convict ex-Illinois Gov. Rod Blagojevich on corruption charges.

The developments demonstrate that the billionaire governor and his wife may face a serious legal threat arising from their controversial pursuit of a property tax break on a 126-year-old mansion they purchased next to their Gold Coast home.

A Cook County inspector general’s report, first published by the Chicago Sun-Times, later found MK Pritzker directed workers to remove all toilets from the mansion in order to have it declared “uninhabitable,” which gave the Pritzkers a huge property tax break. The report also found that Lovely and the governor’s brother-in-law, Thomas J. Muenster, made “false representations” on tax appeal documents.

The county watchdog said all of that amounted to a “scheme to defraud” taxpayers out of more than $331,000.

The governor’s office referred WBEZ’s questions to a lawyer representing JB and MK Pritzker. The lawyer, Marc Elias, denied his clients engaged in any wrongdoing.

“Neither the Governor nor the First Lady have been contacted by law enforcement regarding the property tax appeal,” said Elias, a partner with the Perkins Coie law firm, which has done extensive legal work on behalf of Pritzker’s gubernatorial campaign. “We are confident that any further review of the matter will show that the appropriate rules were followed.”

Schar, the attorney for the first’ lady’s assistant, declined to comment.

Muenster, the governor’s brother-in-law, did not respond to WBEZ’s request for comment. He had listed himself as the owner and manager of the mansion, according to the inspector general’s report.

A spokesman for U.S. Attorney John Lausch, who was appointed by President Donald Trump with support from both of Illinois’ Democratic U.S. senators, declined to comment.

Disclosure of the investigation comes at a sensitive time for a governor, who’s still on a political honeymoon after his blowout victory last fall. And the distraction of a federal criminal probe could threaten to disrupt his aggressive first-term agenda in Springfield.

In the next five-and-a-half weeks, Pritzker will need to expend political capital to pass a graduated income tax, a budget, the legalization of recreational marijuana and sports wagering, and a multibillion-dollar infrastructure plan possibly dependent on a big gasoline tax increase.

‘A scheme to defraud’

A little more than three months into his governorship, the most serious campaign issue confronting Pritzker last fall appeared to have gone dormant.

The property tax scandal picked up steam just a month before the November 2018 gubernatorial election, when the Chicago Sun-Times published news of a confidential memo from Cook County Inspector General Patrick Blanchard.

The report found the Pritzkers had caused the residence they had purchased next to their home to fall into disrepair, in part, by removing its toilets in October 2015 in order to lower the home’s property taxes by having it declared “vacant and uninhabitable.”

On that basis, the Pritzkers’ lawyers persuaded then-Cook County Assessor Joseph Berrios’ office to lower the home’s market value from more than $6.25 million to slightly less than $1.08 million. That ultimately led to a dramatically lower property tax bill for the mansion.

According to the report, MK Pritzker had ordered workers to reinstall one working toilet after the house was reassessed at a lower rate, though it’s unclear whether that happened.

Furthermore, the report found that Muenster, MK Pritzker’s brother, and Lovely, her personal assistant, made “false representations” on tax appeal affidavits when they declared the home had been without functioning bathrooms for years before the 2015 toilet removals. That resulted in more than $132,000 in property tax refunds for 2012, 2013 and 2014.

Combined with future tax relief as a result of the lower assessed value, the Pritzkers gained more than $331,000 from the county.

The confidential Sept. 28, 2018 report by the inspector general characterized the Pritzkers’ tax appeal as a “scheme to defraud” taxpayers. Blanchard also connected the scheme to possible violations of state and federal law, including perjury and mail fraud.

On Oct. 4, 2018, three days after the Sun-Times published its story, Muenster cut five checks totalling $331,432 on the Pritzkers’ behalf and sent them to Cook County Treasurer Maria Pappas’ office. In a letter to the treasurer, Muenster insisted the refunds to the county were “in no way an admission of any wrongdoing.”

And on that same day, Cook County State’s Attorney Kim Foxx’s office revealed it had opened an investigation into the tax appeal and turned it over to its special investigations unit.

The scope and intensity of the federal investigation is not entirely clear.

Likewise, current and former employees of the assessor’s office, including ex-Assessor Berrios, said they have not been contacted by federal investigators. Berrios’ one-time former top aide, Thomas Jaconetty, would neither confirm nor deny any interactions with investigators.

It’s also unclear whether Foxx’s county investigation remains active. An aide to the state’s attorney would neither confirm nor deny the existence of that probe, though the office had spoken publicly about it last fall.

“He has committed, in all likelihood, white collar crime,” Rauner told reporters after a gubernatorial debate in mid-October. “This is as serious as a heart attack. Perjury, mail fraud, tax fraud. This is serious stuff. This is not a joke.”

Elias, the Pritzkers’ lawyer, would only refer back to his written statement when asked additional questions by WBEZ.

But publicly available records don’t make clear how much, if any, of those campaign expenditures related to matters surrounding the property tax appeal case.

Editor’s note: Chicago Public Media receives philanthropic support from The Pritzker Foundation and the Pritzker Traubert Foundation. Gov. JB Pritzker is not involved with either group.

Tony Arnold and Dave McKinney report on state politics and government for WBEZ. Follow them on Twitter at @tonyjarnold and @davemckinney. 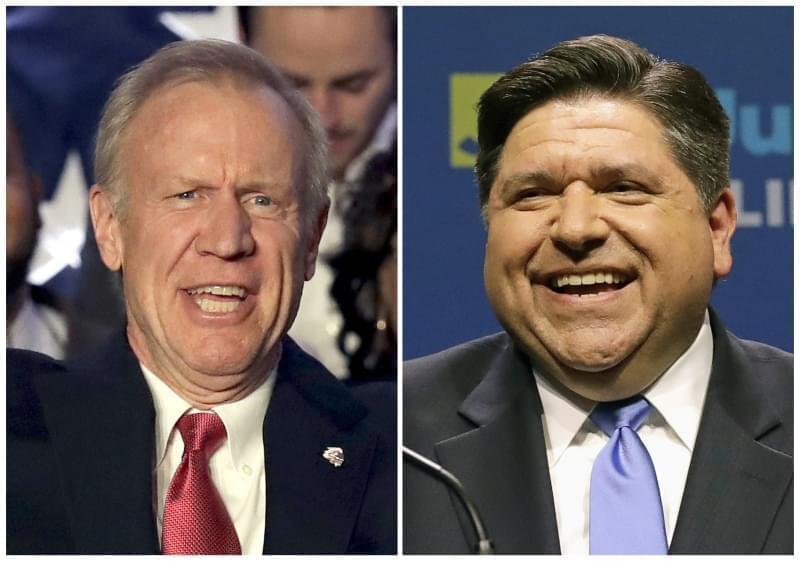