President Trump campaigned on building a wall between the border of Mexico and the U.S. While it appears he's willing to scale back that effort, targeting immigrants who do not have protected status remains near the top of his agenda.

Lawrence Benito heads the Illinois Coalition for Immigrant and Refugee Rights. He spoke with us about how his organization has been acclimating to the administration's stance on immigration.

BENITO: When you campaign on a platform of fear and hate and you create a climate that demonizes, dehumanizes and criminalizes immigrants, and then you surround yourself with people who are known to have anti-immigrant agendas going in ... you end up with the policies and recommended programs that we've seen from this administration. And so, you know, some of the conversations and the negotiations that are happening now ... whether it's the border wall, interior enforcement and other things being suggested, I don't know how far that takes us on actually solving the problem that we need to face.

OTWELL: And as far as Illinois goes, there was a piece of legislation that your group lobbied for and supported that ended up being signed into law. Tell us about that.

BENITO: This past year in the state, we worked on the Illinois Trust Act. This was a piece of legislation that had bipartisan support. It had the support of law enforcement, and ultimately the Governor signed it into law. It was a piece of legislation that would not allow local law enforcement to do the duties of immigration and customs enforcement and we believe that this was good for public safety for communities. If (undocumented immigrants) feared calling the police, it would make our communities less safe. And so we appreciated the bipartisan work for the Illinois Trust Act this past year

OTWELL: When it comes to deportations, the number, according to the data I’ve seen out there – the number has actually fallen in 2017. However, per the President’s orders, ICE, Immigration and Customs Enforcement, has arrested more undocumented immigrants within the United States ... So tell us about deportation and what you’re looking at overall with that issue.

BENITO: Well, certainly there was a lot of anxiety and fear. The president certainly talked about taking interior enforcement seriously. Since that time we've seen an uptick in terms of raids. We're anticipating that workplace raids and larger scale operations are on the horizon, and particularly targeting sanctuary cities. And so we're making sure that our folks are aware of their rights and are informed about what they should be doing to take the necessary precautions.

OTWELL: And so now that we're one year into the Trump administration, what is the Illinois Coalition for Immigrant and Refugee rights - what might be at the top of your agenda looking at least a year ahead?

BENITO: So in the new year, there are a couple pieces of legislation that we're looking at, particularly ... one regarding a registry based on a religious affiliation. So after the Muslim ban there were a number of communities that were fearful of being a targeted in some way. We're working on legislation to not allow specific registries of people based on their religion. We're looking at a piece of legislation that's called “The Voices Act” - dealing with victims of violence or witnesses to crime to protect them and ensuring that they can come forward. And another piece of legislation aimed at undocumented students and access to college scholarship. These were efforts that we attempted to pass last year. And we're reintroducing those pieces of legislation hopefully in this next session. 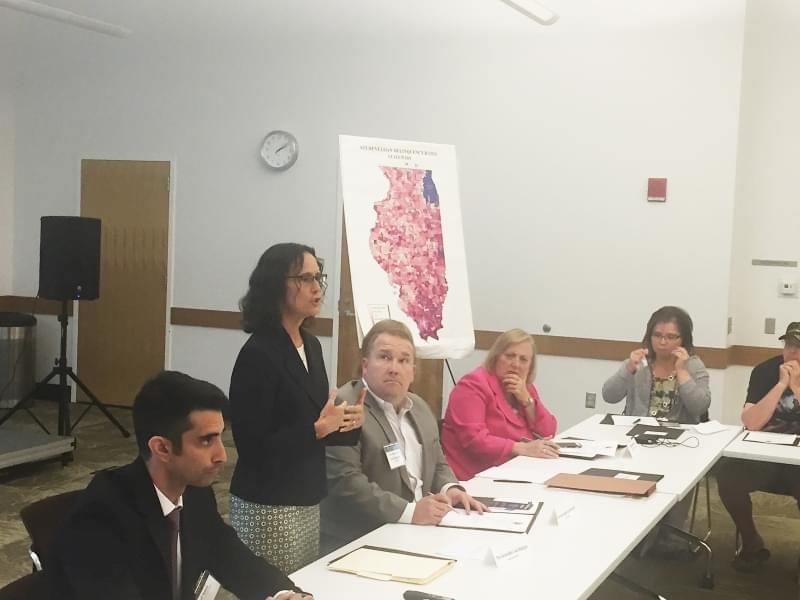