Students Stage Die-In On U of I Campus 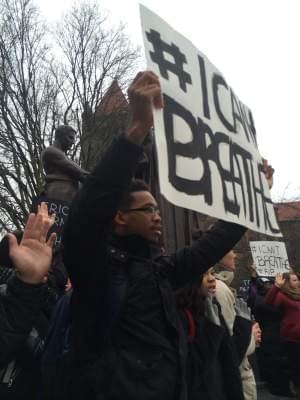 Students on the University of Illinois campus dropped to the ground in unison today for a "die-in" rally. The demonstration was held in solidarity with protesters in Ferguson, Missouri and New York, who are mourning the non-indictments of the white police officers who killed unarmed black men this summer.

Despite the cold and damp, 200 or so protestors lay on the ground, some staying as long as 4 and a half hours -- as long as Ferguson, Missouri teen Michael Brown's body lay in the street after he'd been shot and killed by a white police officer in August.

The silence was in stark contrast to earlier shouts of "Black Lives Matter" and other chants.

But then the singing began...

Led by a female student in a bright headscarf, protestors on the ground and with arms linked on the outside of the group sang, "Mama, mama can't you see what these people out here are doing to me? They killed my brother, won't let me be, someone take me out of this misery."

Brittany Darling, a senior at the U of I, says demonstrating helps her feel less ignored.

"It hurts me to see the country that I believe in really not care whether or not black children are dying," she said.

Darling's arm was linked with Marvin Johnson's, another senior at U of I. He says protesting is a first step in changing laws surrounding racial profiling.

Organizers say they have more solidarity rallies planned this month.