The future of some 36,000 state government employees lies -- in part, anyway -- with the Illinois Labor Relations Board.

The union that represents most state workers -- AFSCME -- and Republican Gov. Bruce Rauner's administration had been at the bargaining table for a about a year when, on Jan. 15, Rauner announced he'd had enough.

He says there's no point to further talks. They're at an impasse. But neither side can make that choice unilaterally. So Rauner's filed a charge with the labor board, asking it to decide.

If Rauner wins AFSCME would pretty much have to take the governor's last, best offer for wages, health care benefits and the like -- a deal AFSCME considers a raw one. That could lead its members to strike.

There's a lot to watch as this evolves. But first things first. What does the state labor relations board do? It takes up charges filed by public employers -- so the state, municipalities (not private businesses) as well as labor organizations and public employees who think that there's the state labor law has been violated.

"It is certainly not unusual for us, to receive a charge ... claiming that one side or the other has bargaining in bad faith, or for example, that one side has declared an impasse when there really is no legitimate impasse, " says the board's executive director, Melissa Mlynski. "Those types of cases ... in and of themselves are not necessarily unusual."

But a charge between the AFSCME and Illinois' Central Management Services, over an impasse in negotiations? That is unusual. "As far as I know, this is probably the first charged we've ever received from these parties, along those lines,"Mlynski says.

Impasse has one definition in the dictionary, and another, legal connotation that's at play here. Under state law, "public employees and the unions that represent public employees are required to bargain in good faith, and to ... attempt to reach a collective bargaining agreement," she explains. "Impasse is basically used when parties have, despite their best efforts, despite bargaining in good faith, have come to a point where they're just not able to reach an agreement. And so ... the question that sometimes comes before us in the form of an Unfair Labor Practice Charge, is one side claiming that the other side has declared impasse unilaterally and that there really isn't a legitimate impasse.

A legitimate impasse, again, is when both parties have, bargained in good faith and just were unable to reach an agreement. The differences between them are just too great."

Mlynski can't speak to specifics of that particular case, but she can talk generally about how these types of cases are handled.

It "depends on the theory of the case," she said. "We look at the totality of the circumstances. It is a very fact-intensive inquiry ultimately to determine whether the parties have in fact bargained in good faith. Have they been meeting on a regular basis, have they been exchanging proposals, have they really been working towards an agreement but perhaps just unable to reach one."

Here are the details:

"When an Unfair Labor Practice Charge is filed ... it is immediately assigned to one of our investigators. And it goes through an investigation stage. And at that point the investigator will reach out to both parties, request position statements, any documents, any evidence that they want to submit to support their side. And then ultimately at the conclusion of the investigation, I, as the executive director, will have to make a decision as to whether the charge raises a question of law or fact that warrants a hearing. So it is not our role during the investigation state to determine whether the law has been violated. Or whether there's impasse. We are simply looking to see whether there's a question here, whether this charge raises a question that warrants a hearing," Mlynski explains.

That happens no matter what.

Here's where matters can diverge, depending on what the investigation shows and what Mlynski chooses.

That decision could be appealed by either party to the board.

Option 2: The director determines there is not evidence to warrant a hearing, she dismisses the charge. In Mlynski's words: "If in the course of investigation I determine that the charge does not even raise a question that warrants a hearing, I could issue a dismissal of the charge."

Her dismissal could also be appealed (by either party) and sent to the board.

In short: it could go down a couple of different paths, with Mlynski playing a central role in each. "I always describe my role as sort of the gatekeeper. Again, I'm not necessarily going to address the underlying issue in an Unfair Labor Practice Charge, but I'm going to be the gatekeeper to determine whether the charge itself warrants further hearing, or warrants a hearing," she said.

Mylnski's hesitant to predict how long this case will take to reach a conclusion.

"I hesitate to answer that question cause every case is so different and there's no statutory time frame for the investigation. But obviously we will move as quickly as possible while still ensuring that each side has adequate opportunity" to present information," she says. "It really kind of just depends on the complexity of the case and how quickly the parties give us their information and how quickly we're able to put it all together. There are times where it could be as little as a month and there are times where it could be more than that. It's hard to predict that in every given case."

Mlynski recognizes - this particular case is attracting a lot of attention. So many people - tens of thousands - are affected (not to mention the outcome's affect on the state budget) but she says the Illinois State Labor Relations Board will handle this one the same it has every other.

Mlynski is, of course, the board's director; the individuals who make up five-member state panel are another matter.

Critics have questioned if handing the decision over to the board is biased, because a majority of the members are Rauner appointees -- heck, making appointments is one of the perks of being governor. Rauner's tried to assuage that. In a Q&A about the impasse released by his administration, he says a majority of the board had originally been appointed by his predecessor, Democrat Pat Quinn.

UPDATE: Rauner Asks Labor Board To Rule If Labor Talks At Impasse 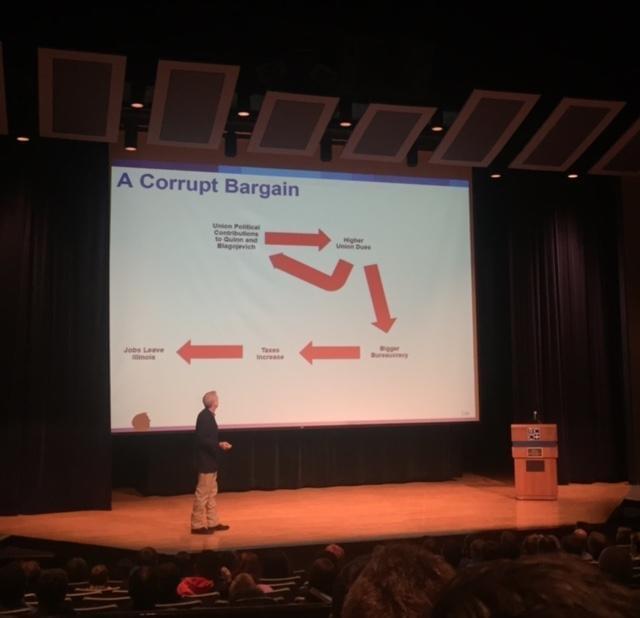