To Join ‘63 March On Washington: ‘Like Climbing A Mountain’

Through The Race Card Project's six-word stories, we'll meet some of the people who witnessed that history and hear their memories and reflections on race relations in America today.

Throughout 1963, American TV screens had been filled with images of non-violent demonstrations that turned ugly, with Southern police officers unleashing dogs and fire hoses on protesters. There were broad concerns all the way up to the top levels of government about the March on Washington. How large would the crowd be? Might there be violence?

But Jack Hansan of Cincinnati was not concerned about all that. A white man who'd been working on civil rights in Ohio, he wanted to be in that number, however large or small the gathering.

"We had to get rid of this — I don't know how you would say it — this discrimination that was so prevalent in communities like our education system, our churches," Hansan says. "So participating in the march was like climbing a mountain, and for us, we wanted to be on the top."

That did not sit well with Jack Hansan's father. He wrote a letter pleading for his son to stay put.

"He lived in Kansas City, Mo., and his message was, 'I wish you wouldn't go,' " Hansan explains. "And he said, 'Your real responsibility is to your family, your sons.' But you know, that was him." 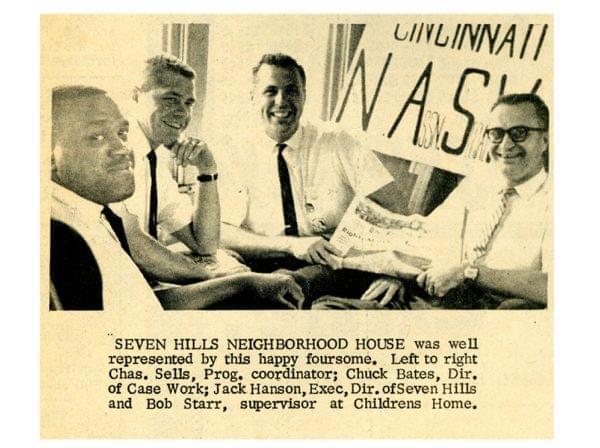 Hansan was one of 500 Cincinnati businessmen and civic activists who took a special train to D.C., leaving Cincinnati at 5 p.m. "We rode two nights on a train, one up and one back. There was no club car, but it was fun," he laughs. The group spent the night talking and schmoozing. "We were all dressed politely, like we were going to an office — shirts and ties."

That attire was no accident. Marchers were advised by the local organizing committee to look clean and sharp, dressed as if they were in D.C. to close a deal.

Even so, Hansan knew he was witnessing history that day and wanted to tell his wife and four young sons about it. He grabbed a plain postcard, stamped with a Lincoln 4-cent stamp, and jotted down a few words. Hansan, who still has the postcard, chokes up as he reads his note aloud.