There is no question Illinois’ financial problems have hurt public schools. School leaders are trying to trim costs without causing too much harm to programs, and that includes physical education.

State funding for public schools has been cut by more than $860 million since fiscal year 2009, according to the Illinois State Board of Education.

At the elementary school level, school officials are faced with the decision of whether to hire a specialized teacher for physical education or have the homeroom teachers handle the job.

Like many school districts, the Arcola School District in Douglas County has a designated P.E. teacher for its elementary school even though it is not required, but it was not always that way. Back in the early 1990’s, Arcola’s grade school homeroom teachers handled P.E.

Arcola Superintendent Jean Chrostoski said the district might have to return to that model if the state’s financial situation doesn't improve, but only as a last resort.

“When we got ready for our reductions, we asked the staff what kind of options there would be for reductions,” Chrostoski said. “Those teachers that had taught at a time when they taught P.E. said that is an option. That is what we used to do. It’s not something we would necessarily embrace or want to do, but it has worked for a long time.”

At the middle and high school levels, Chrostoski said teachers must be certified to teach physical education, but all grade school teachers are allowed to lead a gym class.

While in college, elementary education students get training in every area they might have to teach from art to music to P.E.

In Champaign County, the Urbana School District began requiring its grade school teachers to pick up P.E. about 30 years ago because of budgetary reasons, and it continues doing that today.

On a recent school day, first grade teacher Jill Quisenberry, who works at Urbana’s Wiley Elementary School, worked with her students on arithmetic before leading them to the gym.

“When you get to the gym, we’ll go to the center circle, we’ll check our shoes,” Quisenberry told her students “Get ready for that. Let’s do our song. Are you ready?”

By the time Quisenberry’s class make it to the gym, other first grade students and teachers are waiting for them. Quisenberry talked to the group about the four different stations where students would be assigned over the next half hour.

“We’re going to have a small group working on a number line, and over there were going to do some directionality working with some feather fencing,” she said. 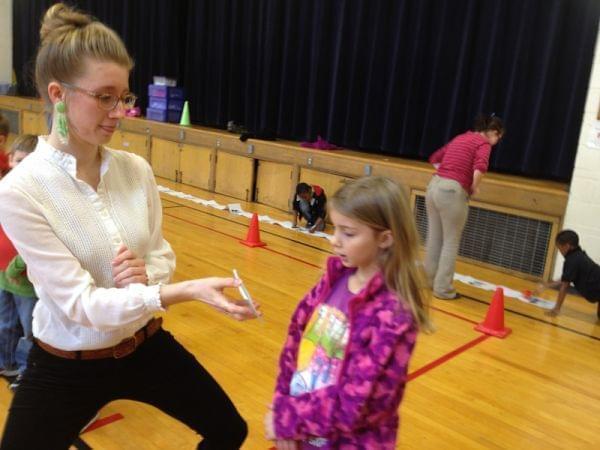 For the teachers at Wiley Elementary, a big part of physical education is integrating what goes on in the classroom with what happens during P.E.

At one of the stations, student teacher Liesel Booth (pictured to the right) led a game called the Red Smacker. Students put on a red foam glove, and punched a picture on a wall that matched a word given to them by Booth.

“If you need help reading, that’s fine. Ask me,” Booth told the students. “Some of these words are a little bit big. All right. Ready?”

Booth handed a card to one of her students with a picture of a circle.

“Circle!” he replied, before rushing to the wall to find the corresponding picture.

Booth took on the role of the play-by-play announcer: “He’s running. He’s got his foam hand ready. He’s looking for the circle. Bam! He smacked the wall. He’s going to bring it back. Hand in the glove, switch lines, love it! You guys got it. Good job.”

After class was dismissed, Quisenberry explained that a big part of physical education is classroom control, which she noted can be a challenge for some new teachers.

“P.E. is sort of you go into a big room, and you have to use a larger voice usually, and you’re trying to organize a game, which is a different thing than trying to organize a lesson,” she said. “And so that mindset has to change, and that juggling is difficult to learn. That’s one of the reasons we pair up.”

Longtime Wiley teacher Patty Bergan teaches second grade. She said she believes in integrating what goes in the classroom with what students learn during P.E.

“I created an integrated unit,” Bergan said. “I've been a sports mom. I was a sandlot kid.”

Bergan is one of those teachers who takes her passion, and really runs with it. In this case, it is baseball.

She does the regular baseball activities one might expect during a gym class, but she also talks to her students about the science and math of throwing a ball, the history of the Negro Leagues, and she even teaches them some classic baseball songs, like “Center Field” and “The Star-Spangled Banner."

Bergan is battling cancer, and learning how to walk again because of a tumor that left her paralyzed last year. Cancer or not, she said P.E. as a critical part of the job.

“Nothing’s too much. I have to adapt,” she said. “I have to do for myself what I’ve done for children for the last 20 some years. I mean I’ve worked with kids with hearing and vision problems, Down Syndrome; I mean children that have been in wheel chairs or broken an arm.”

Physical education in Illinois is focused on specific learning standards set by the state, but the curriculum can vary from district to district.

Urbana’s Director of Curriculum Jean Korder said the district re- visits its P.E. curriculum every seven years, and during the last revision, the curriculum went from focusing heavily on sports to helping teach kids to set their own fitness goals.

“So, we know that not every child is going to be a star athlete, but every child should have access to managing their own fitness and their own health as they become adults,” Korder said.

Over at the Arcola School District, the elementary school’s P.E. teacher attends annual physical fitness and nutrition workshops to keep up with state standards.

Urbana grade school teachers also get a refresher course every couple of years from the University of Illinois’ Department of Kinesiology and Community Health, and Champaign-based publisher Human Kinetics, which puts out recreation videos and books. It is these partnerships that Urbana school officials say help fill in gaps that may exist from not having designated P.E. teachers.

But that is not enough, according to Deb Vogel, who is a retired P.E. teacher and now a member of the state’s Enhance Physical Education Task Force. She said having homeroom teachers oversee P.E. provides a disservice to students.

“To say you’re going to cut back on it or leave it up to somebody who doesn’t have a passion for it or who doesn’t care or who doesn’t know how to do it, that just seems foolish to me,” Vogel said.

While Vogel said homeroom teachers can provide valuable input about the physical health of their students, she believes school districts ought to do what the Arcola School District does, and hire designated P.E. teachers for every grade level.

“I’m sure that all elementary school teachers know how developmentally kids change, but I don’t know that they know what’s developmentally appropriate in the area of physical development,” Vogel said.

Assistant Superintendent Donald Owen, who takes over as Urbana Schools superintendent in July, said elementary P.E. teachers are not in the district’s Strategic Plan, and therefore not a priority for the school district. He added that the district would not implement designed P.E. teachers at one building or as a pilot, because that would not be in the best interest of all of the students, and it would most likely not be sustainable.

“One of the things that we always balance is if we move in that direction, we’re looking at ways of doing it in perpetuity,” Owen said. “It’s not something we could pilot or say try this for a year or let’s try this in one building because that wouldn’t be in the best interest of all of our kids and all of our buildings.”

If the Urbana School District hires P.E. teachers at the grade school level in the future, Owen said it will continue looking at ways to integrate physical fitness with the rest of the curriculum.

Meanwhile, the Illinois State Board of Education said it is working on revising content standards for literacy, math, science and social science. A spokesperson said the Board will also be doing the same for physical education, but that it is too early to say when.

This 1950’s film produced to promote phys ed instruction in schools sums up many of the present day concerns about physical education: