Dianne Gordon, a mom who lives in Champaign, knew something was wrong with her daughter Rory the minute she stepped off the school bus one afternoon in April.

Rory, a seven-year-old who starts second grade at the Champaign Unit 4 School District this fall, was inconsolable, Gordon said.

Gordon said Rory told her she was upset by a “bad guy” drill. Champaign Unit 4 school officials confirmed that students at Rory’s elementary school participated in a “hard lockdown drill.”  An email sent to Gordon from the school’s principal states that the students were told to remain silent, keep their bodies quiet and calm and listen to their teachers.

Rory is an anxious child, Gordon said. She’s on the autism spectrum and she’s been diagnosed with attention deficit hyperactivity disorder.

A growing number of states now require schools to conduct them. In the last two years, eight states — including Illinois — either passed or updated laws that require these drills, according to the National Conference of State Legislatures.

A 2013 Illinois law mandated active shooter drills, but left it up to individual districts to decide whether to involve students. Last year, however, lawmakers passed a bill requiring all school staff and students to participate in an active shooter drill within the first 90 days of the school year.

The change in the law worries Gordon. For weeks after the lockdown drill, Rory was on high alert anytime she saw a person she didn’t recognize.

Rory is changing schools this year, and Gordon said she doesn’t do well with big changes.

“And then within the first couple of months, she’s going to be doing these scary drills again, which I’m afraid will make her uncomfortable in this brand new environment,” Gordon said.

Over the last five years, there’s been an average of roughly 52 kindergarten through twelfth  grade school shootings per year, according to government data. While every instance is tragic, Gordon believes the odds of a shooting happening at her daughter’s school district are low.

She said she understands why teachers and school staff should undergo active shooter training, but given the potential psychological harm on her daughter, Gordon doesn’t think Rory — or any child — should have to participate.

Melissa Brymer, who directs the terrorism and disaster program at the National Child Traumatic Stress Network, disagrees. NCTSN is a national network of healthcare providers, families and researchers that was created by a congressional act in 2000. The organization has published guidelines for schools to use when implementing active shooter drills.

Brymer served as the lead advisor to the Newtown Public School District in Connecticut to create their trauma recovery program following the Sandy Hook Elementary School shooting in 2012. Since then, she said, more schools have implemented active shooter training.

Brymer said the NCTSN guidelines are an effort to address concerns from parents and educators about the impact on student and staff mental health.

The guidelines present action steps for schools to take before, during and after active shooter drills. NCTSN suggests using developmentally appropriate language to describe the drill to students beforehand. The organization also recommends that educators are trained on self-care and coping strategies, and that local media are informed so that no one mistakes a drill for a real shooting.

The guidelines also recommend holding informational meetings with parents to allow plenty of time for discussion. Schools are also encouraged to ask parents to inform staff if their child has a trauma history or a special need that may require extra support.

Brymer said unannounced or surprise drills are not recommended, because they can create anxiety and alarm for students, staff and community members.

The goal, she said, is for these drills to be teaching moments.

“We don’t learn when we’re petrified,” Brymer said. “I think we have to remember what’s the goal of these drills, and the goals are to have students and educators have the basic tools and know what to do when there’s an intruder. We need to make sure we’re creating an environment, keeping that learning potential.”

But Brymer said it is important for students to be involved in these drills, largely because a shooting could occur at any time.

“Because we can't predict when emergencies are going to happen, it is important to make sure that students know the basic steps of what to do in case there are these times when an adult isn't present,” she said.

I don't know that we do ourselves any favors with these drills... But I do think that train has left the station.

As for solid research studies on the issue, Steven Schlozman said there aren’t any. Schlozman is a child psychiatrist at Massachusetts General Hospital in Boston, a Harvard professor and the co-founder of the Clay Center for Young Healthy Minds, an online resource for information about child and adolescent mental health.

“It’s a very hard thing to investigate,” Schlozman said. “The data, if it does exist, can’t be that good.”

“But even in those studies, there are anecdotal descriptions… of kids who are already vulnerable to anxiety disorders, to developmental disorders, or who are cognitively delayed, and despite people being super careful to make this a more palatable exercise for them, they still get pretty, at best, unnerved, and at worst, pretty traumatized by it,” Schlozman said.

Schlozman said he’s skeptical that involving students in these drills will ultimately improve their safety, because there’s no data to support that argument. He said he also worries about children like Rory.

“I don't know that we do ourselves any favors with these drills,” Schlozman said. “But I do think that train has left the station.”

He said he can’t imagine state lawmakers rolling back active shooter drill requirements like the one recently passed in Illinois.

For Rory and her mother, Gordon, there’s a caveat in the Illinois law: school staff can exempt some students from the drills. Gordon said she hopes that will be the case for Rory. Gordon said she often thinks back on her experience participating in an active shooter drill at her workplace.

“It’s a scary thing for us. So why wouldn’t it be scary for kids,” Gordon said. “Do you really want your kids to go through that kind of fear and terror? I would think the answer would be no.” 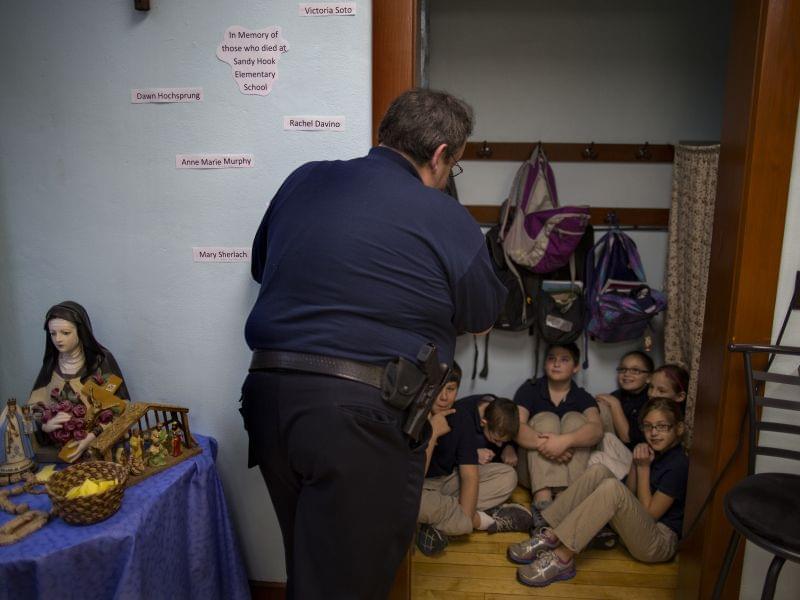