In Champaign-Urbana, the 1960s protest era left behind more than broken glass and memories of fists raised in anger. On the University of Illinois campus, the period gave birth to a novel approach to calm student unrest--the Medicare 7, 8 or 9 Dixieland jazz band, which went on to become a treasured part of the community for more than 30 years. 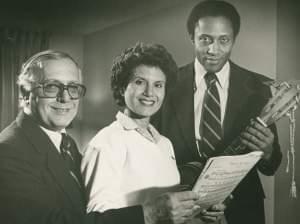 Perrino and the band he founded, looking back at the group’s history with concert footage, new interviews with band members, archival photos and excerpts of previously taped interviews with Perrino.

In 1969, music professor Perrino, along with other professors and grad students, staged an impromptu Dixieland jazz concert at the Illini Union, where students gathered in the South Lounge to castigate the administrations on campus and in Washington. When the group performed, the room filled with people, and for once people weren’t yelling at each other. Over the next 30 years, the group played more than 2,000 performances all over Illinois and in more than 35 states.

Perrino died a year ago, and his friends and colleagues have had time to reflect on his 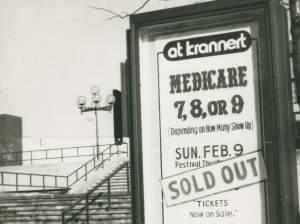 legacy and that of the musical group he founded. “I think people’s comments may reflect a different perspective now that some time has passed,” said WILL’s Les Schulte, project manager for the program. Band members John O’Connor and Stan Rahn have also died, he said.

The 90-minute program, produced and edited by WILL’s Tim Meyers, will be about half interviews and half musical footage from previous WILL-TV specials produced between 1982 and 2005. New interviews include vocalists Dena Vermette and Abby Crull; former U of I associate dean of students Willard Broom; former U of I Alumni Association director Lou Liay;  band members Gregg and Jeff Helgesen, Carl Johnson, Don Heitler, Jordan Kaye, Rick Murphy and Morgan Powell; the U of I's Chip McNeill and Scott Schwartz; and Dan's wife, Marge Perrino.

Songs performed by Medicare in the program includeTailgate Ramble, Wolverine Blues, I Can't Get Started With You, I Wish I Was in Peoria, Sugar Blues, Tin Roof Blues, Come Sunday and When the Saints Go Marching In.

Watch "How I Wish I Was in Peoria" from the show.