Students from several Illinois colleges gathered on March 31 on the University of Illinois campus to recognize Transgender Day of Visibility.

Students said they were there to protest anti-trans legislation in the United States.

The event was organized by the Campus Union for Trans Equality and Support and the Young Democratic Socialists of America at the University of Illinois. 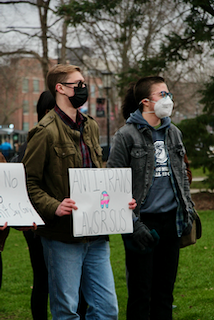 Azer Matten, the president of the Campus Union for Trans Equality and Support, said it’s important to provide resources to transgender people.

“I know that when I was in high school, if I didn’t have access to different resources, I’d be in a much worse place than I am now,” Matten said.

Jordan Duncan, a former student of Southern Illinois University, said they heard about the rally and wanted to show support.

“Reducing the harm that comes from loss is essential and that can be done through banding together,” Duncan said.

Speakers at the rally encouraged students to call politicians and demand support for the LGBTQ+ community and to donate to groups that support transgender individuals.