We Kept Our Stick on the Ice

Looking back at 18 years of "The Red Green Show" on WILL-TV.
by David Thiel

Back in the day (1997), it was considered a bit controversial for a PBS station to air The Red Green Show. While there was nothing edgy about Canadian comedian Steve Smith’s ode to makeshift repairs and marital advice--summed up in the oft-repeated mantra “if the women don’t find you handsome, they should at least find you handy”--the intentionally broad humor was seen by some to be a poor fit with our high-class programming. (Never mind that Are You Being Served? had been a WILL mainstay since 1989.)

Still, it had become a favorite on some Midwestern pubTV stations, so when PBS offered a live “pledge-o-tainment” event on March 8, 1997, we said “sure!” Or possibly, “what the heck.”

Those live shows were so much fun. For two hours, public TV stations across the country competed to raise the most money (adjusted for market size) while “Red” and his gang provided updates from Possum Lodge.

While WILL wasn’t among the winners that year, our success encouraged us to purchase the series. Our first broadcast of what was then called The New Red Green Show was Sunday, June 15, 1997 at 5:30 pm.

Over the next few years, the live shows were a highlight of the March pledge drive. And we enthusiastically got into character, with our own Les Schulte and longtime volunteers Rick Atterberry and Rick Miller wearing plaid flannels as members of the local Possum Lodge chapter. One year they appeared in a “remote broadcast” (actually from the scene shop next to our studio) building what was alleged to be a satellite dish!

For the 2000 iteration—titled Red Green Live: Uh-Oh!—I was sent to Toronto to answer phones on the set. Most of the core cast was there, and they were just as amiable in person as their on-screen personas. Coincidentally, that year WILL had its best-ever showing in the annual station competition, netting us a lovely trophy decorated with duct tape and clamps!

The Red Green Memorial shelf in my office. The centerpiece is the signed trophy won by WILL-TV in 2000.

We continued to air The Red Green Show for the better part of two decades, well after the series went out of production in 2005. Partnering with Champaign’s Virginia Theater, we hosted a screening of the feature film Duct Tape Forever, and in 2011 Red himself appeared live on that stage.

I bring all of this up because last month saw the end of that run. As with Keeping Up Appearances, another comedy that aired on WILL for 18 years, it felt like time to give Red Green a rest. I know that it’s not at all atypical for a public television series to run for decades, and that some of our viewers like it that way. The downside of that tendency, however, is that there are fewer timeslots and less money available to try new things.

We’re lowering our duct tape flag for now. Until next we meet, Red, it’s been a lot of laughs. 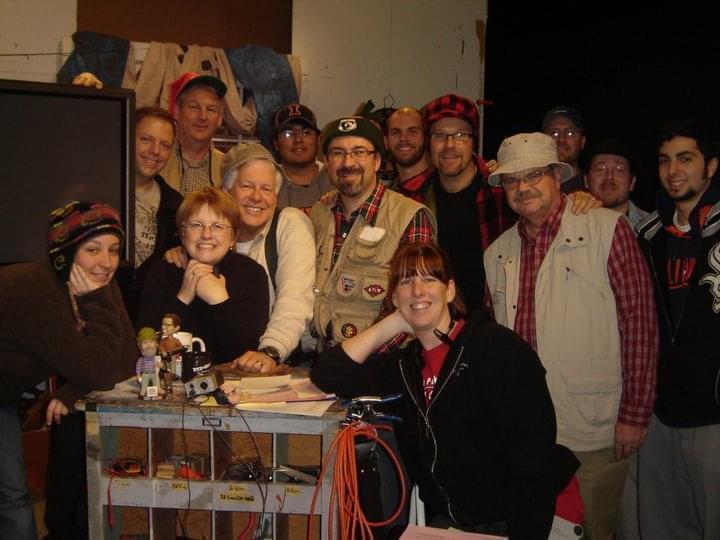