Some great performers and an oddball or two.

Earlier this month I attended the PBS Annual Meeting in San Francisco. In previous years, I’ve come back with all manner of news about upcoming series, but due to inclement weather at O’Hare Airport, I wound up missing much of the first day of the conference.

Happily, I can share with you some updates about new dramas, some surprising performances, a very odd kids’ show, and—just possibly—the return of Sherlock Holmes’ nemesis! Read on!

The PBS Arts Fall Festival returns on Friday, September 26, and this year’s offerings will include Live from Lincoln Center’s presentations of “Sweeney Todd: The Demon Barber of Fleet Street” starring Emma Thompson and Bryn Terfel; and “The Nance,” a drama about burlesque performers starring Nathan Lane. Austin City Limits will celebrate 40 years of concerts, and the San Francisco Opera will bring us a new production of the Gershwins’ “Porgy and Bess.”

This December, Bing Crosby croons in an American Masters profile. Other arts highlights in the season to come include James Earl Jones and Angela Lansbury in “Driving Miss Daisy;” another series of Shakespeare Uncovered; and, in what may be the oddest pairing ever from PBS, Tony Bennett and Lady Gaga in Concert.

Speaking of odd, PBS Kids will become very strange indeed when a new live-action series, Odd Squad, premieres this November. Olive and Otto are agents of a secret organization that investigates weird happenings which invariably involve math concepts. Think “Men in Black,” only with kids in all of the roles. The preview clips were hilarious, and if, like me, you miss our '80s show Mathnet, Odd Squad may be for you.

Some of the most exciting program highlights naturally involved our Sunday night dramas. Both Downton Abbey and Mr. Selfridge will, of course, be returning in 2015. Other Masterpiece miniseries coming next year including a new eight-part adaptation of Poldark; Wolf Hall, a fictionalized biography of 16th Century English statesman Thomas Cromwell; and Indian Summers, set in 1930s India during the decline of British power.

Prior to the drama presentation, many of those in attendance received the following mysterious e-mail: 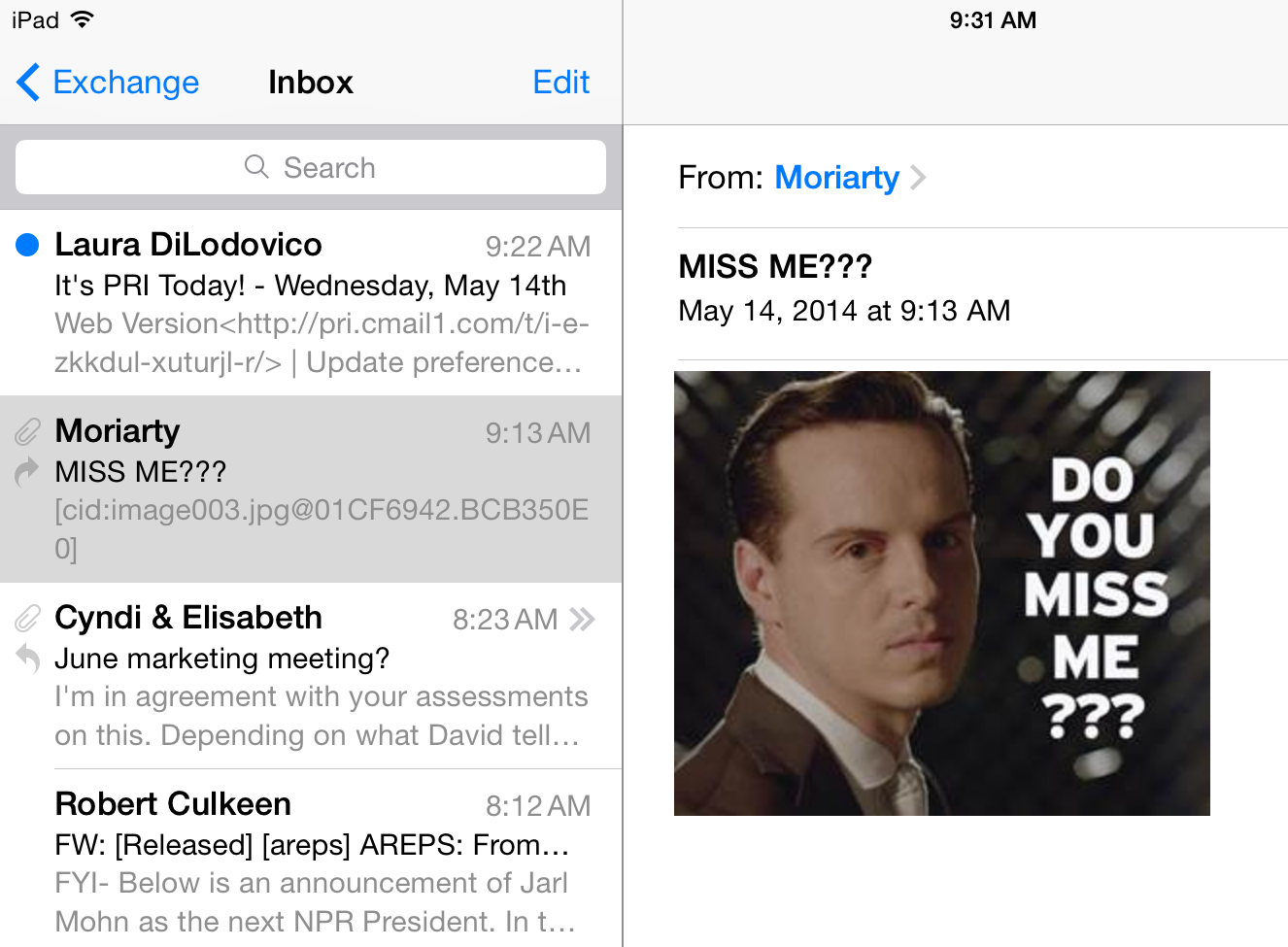 Purporting to be from Sherlock's rival, the late James Moriarty, it seemed to presage an announcement about a forthcoming season of the detective series (which ended with a similar message). Unfortunately, while Moriarty's "Do you miss me?" taunt did indeed come up on the big screen in San Francisco, the dastardly villain was just a tease. Current rumor has it that we won't see the fourth series of Sherlock before 2016. Though with both Sherlock and Moriarty, it's best not to assume the obvious!