Star-Gazing at the PBS Annual Meeting

Handsome, handsome Rufus Sewell was in Chicago...on his way to your home next year.
by David Thiel

In mid-May, PBS' travelling annual meeting put down stakes in our very own Windy City of Chicago, and while networking and business presentations took up most of those three days, we also took a peek at many shows coming soon to WILL-TV. The one that I heard the most buzz about was Victoria, an eight-part drama that will air Sunday nights in early 2017.

Much of the reason for that buzz was the presence of actor Rufus Sewell, who will appear as the mentor and unrequited love interest of young Queen Victoria, played by former Doctor Who companion Jenna Coleman. Me, I was hoping that Coleman would be on hand, but she was literally on her final day of filming the first season of Victoria. So, I had to make do with Rufus Sewell...or as I said to the swooning attendees at my table, "stupid* Rufus Sewell."

I modified that to "stupid, hunky Rufus Sewell" once I saw him and Coleman in a clip from Victoria. The romantic tension between them was strong, and even I was forced to admit his swoonworthiness.

He wasn't the only celebrity to join us in Chicago. Legendary TV producer Norman Lear (All in the Family, One Day at a Time, etc.) was there to help introduce the American Masters documentary about him, subtitled Just Another Version of You.

But the most affecting appearance by a big-name guest was certainly that of rapper/actor LL Cool J., who was profiled on the recent season of Henry Louis Gates, Jr.'s Finding Your Roots. Gates told the story of his discovery that Cool J's maternal grandmother was actually an adoptive parent, and LL mimed his being on the receiving end of the shocking phone call. 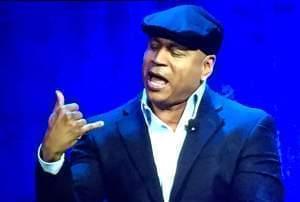 *I have no reason to believe that Mr. Sewell is "stupid" in any way. I was just bitter about not being able to meet Jenna Coleman.