The History of Britcoms on WILL-TV (Part One)

A look back at the early days of laughter with a different accent.
by David Thiel

To absolutely no one’s surprise, WILL's first British comedy was Monty Python’s Flying Circus, debuting Saturday, March 8, 1975. We were a little late to the party, as many public TV stations had begun airing the show the previous fall. Still, we gave it a big push with a double-paged spread in our early, pamphlet-sized Patterns program guide. 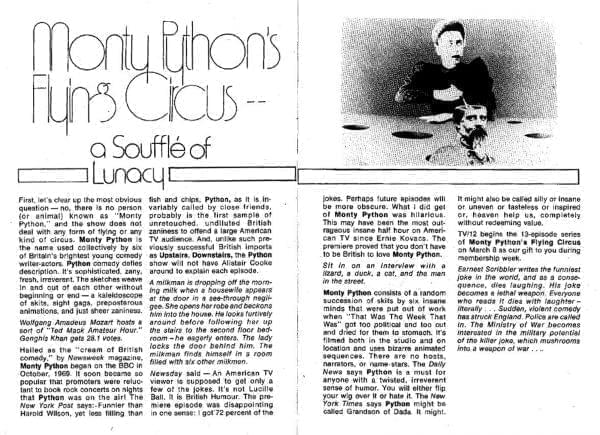 And now for something completely…the same. Python aired steadily on weekends over the next several years, and in October 1978 it even enjoyed a brief run weeknights at 10:00 pm. (It was displaced from that slot by, of all things, The Dick Cavett Show.)

That same month—October 9 to be exact—saw the premiere of Fawlty Towers. A more traditional situation comedy, it starred popular Python alum John Cleese as Basil Fawlty, the harried, manic proprietor of a resort town hotel. Despite being a perennial top-5 pick in lists of all-time great Britcoms, it didn’t even rate a mention in Patterns!

That fate didn’t befall its replacement, the sketch comedy series The Two Ronnies, starring Ronnie Barker and Ronnie Corbett. It received a full-page article for its debut on July 7, 1979. 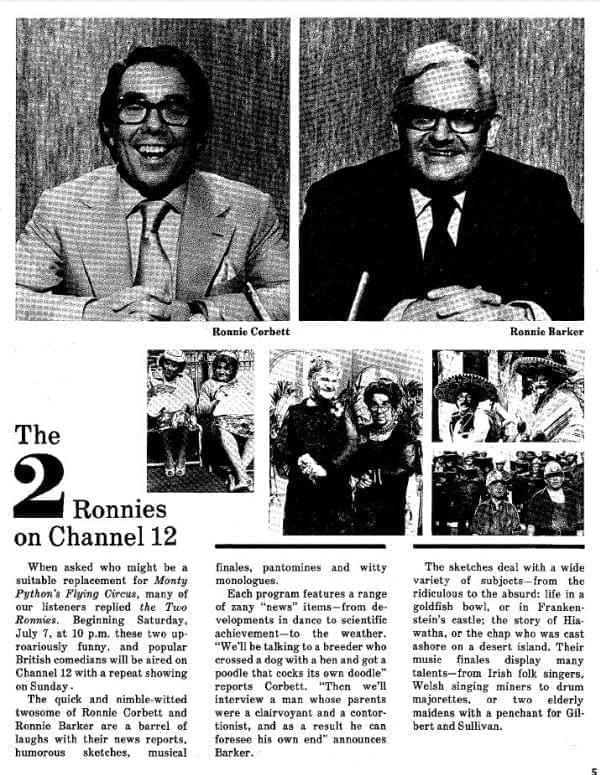 In November of that year, one of my personal favorites came to Sundays on WILL-TV. The Fall and Rise of Reginald Perrin starred Leonard Rossiter as a middle-aged middle manager with a soul-crushing job who faked a suicide and employed a variety of disguises in a search for happiness.

And that was it for the '70s: four series spread over five years. We were a long way from Britcom Saturday Night. Next time, I’ll look at the ‘80s and the ascendance of Penelope Keith.